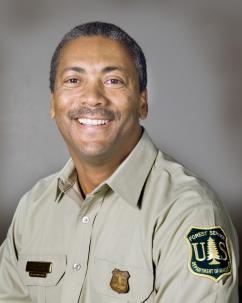 Randy Moore was appointed as the 20th Chief of the Department of Agriculture’s U.S. Forest Service in 2021. He is the first African American to hold the position.

Before his appointment as chief, Moore served as Regional Forester in the Pacific Southwest Region in California from 2007 to 2021, where he had responsibility for 18 national forests, covering one-fifth of the state on 20 million acres of land. This also included overseeing State and Private Forestry programs in Hawaii and the U.S. affiliated Pacific Islands.

From 2002 to 2007, Moore served as the Regional Forester for the Eastern Region headquartered in Milwaukee, Wisc. He led the region’s efforts to successfully complete Forest Plan Revisions within a two-year timeframe, in what the Forest Service called “an unprecedented accomplishment.”