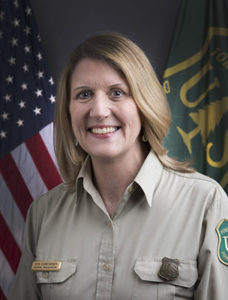 Vicki Christiansen was named the 19th chief of the Forest Service in October 2018. She served as interim chief from March 2018 until her appointment. She's the first chief since Ferdinand Silcox (1933-1939) not to have spent the majority of their career in the Forest Service.

Prior to being named interim, she served as the agency's Deputy Chief for State and Private Forestry, where she had oversight of Fire and Aviation Management, Tribal Relations, Forest Health Protection, Cooperative Forestry, Grey Towers and Conservation Education. Combined with her time as Associate Deputy Chief, she spent a total of six years in that branch. She joined the Forest Service in 2010 as the Acting Director of Legislative Affairs before quickly being named Deputy Director of Fire and Aviation Management in July 2010. In 2012, she briefly served as Acting Regional Forester for the Northern Region, the same region that produced three of her four immediate predecessors. Vicki brought her experience as a line officer, land manager, wildland fire fighter, and state forester to her extensive work on the National Cohesive Wildland Fire Management Strategy.

Prior to joining the Forest Service she served as the Arizona State Forester and Director of the Arizona Division of Forestry from March 2009 to July 2010. She was responsible for the protection of 22 million acres of state and private lands in Arizona, including wildland fire management. She served as chair of the Wildland Fire Committee for the National Association of State Foresters.

Vicki also served as the Washington State Forester, where she had a 26-year career with Washington State Department of Natural Resources (DNR). She started as a wildland fire fighter while still in college. She held many different positions at Washington DNR with a strong emphasis in operations, managing state trust lands, and regulating forest practices on state and private lands in the state. In her first permanent position as a forester, she was responsible for the reforestation of state trust lands in the Mt. Saint Helens' blast zone. In all, Vicki has been a wildland fire fighter and fire manager for 36 years. She has numerous credentials in the wildland fire program with a special expertise as a fire line-blasting advisor. Vicki has a BS in forest management from the University of Washington (1983, cum laude).