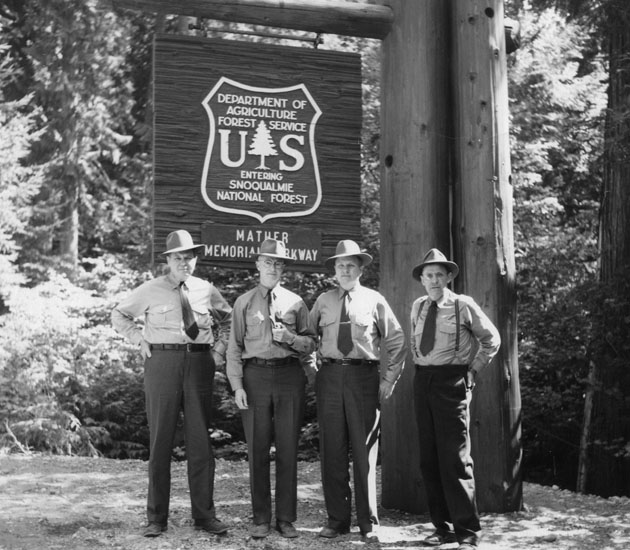 Pinchot organized the Forest Service quickly. He adapted previous administrative plans devised by Filibert Roth, chief of Division R in the General Land Office; used his mentor, Sir Dietrich Brandis' suggestions; and relied on a cadre of students and "experts" who wanted to serve the budding agency. Guidelines for forest officers were soon published and became known as the Use Book.

In 1907 the reserves were renamed National Forests. During the following year, 6 district (by October 1930, known as regional) offices were organized in the West for administering field work. The office of State and Private Forestry Cooperation was also established in 1908, as was the first Forest Experiment Station, at Fort Valley, Arizona.

Henry Graves, the second chief of the Forest Service, continued to expand the presence of forest research, opening the Forest Products Laboratory in 1910 and consolidating the various research projects around the country under the Branch of Research in 1915.

In an exchange of letters in 1910, the Secretaries of Agriculture and Interior worked to clarify with President Taft the terms by which national forest lands should be retained, added, or eliminated. The three agreed that vegetated lands that protected watersheds, alpine lands within forest boundaries, and lands that promised more value growing trees than in other forms of cultivation should all be kept in the national forest system; lands that did not meet these terms could be dropped as national forests. [ View transcriptions of the letter to Taft and the response letter from Taft ].

The establishment of Eastern national forests began after President Taft signed the Weeks Act on March 1, 1911. The law created a National Forest Reservation Commission and authorized federal funds to purchase lands on the watersheds of navigable streams. District 7 (Eastern District) was established in 1914, with its headquarters in Washington, D.C.

As American society gained more leisure time, the national forests became valuable for recreation and a movement arose to protect areas of wilderness. Wildlife management became yet another responsibility for the agency. The agency came under increasing pressure to manage the national forests for more than watershed protection and timber production.

The U.S. Forest Service Headquarters History collection contains laws and legislation affecting agency organization, documents pertaining to reorganization, and administrative reviews and procedures. For more information as well as for assistance in retrieving documents found in the Collections Database, contact Jamie Lewis at james.lewis@foresthistory.org or (919) 682-9319.