Recreation and the U.S. Forest Service

Americans have a long tradition of taking to the woods, for myriad reasons - to explore and challenge ourselves, to relax and feel closer to nature, to build lasting memories with family and friends. Whatever the reasons, the forest draws us in.

Historically, the forest was seen mainly as a source of food and fuel, occasionally serving as a setting for picnics, camps, and other gatherings. Only wealthy Americans had the luxury of viewing Nature as a playground. The expense of traveling to distant resorts and the paraphernalia requisite for vacationing there put such experiences out of reach for ordinary citizens.

The impetus for protecting large tracts of forested land as forest reserves in 1891 was to ensure the nation would have adequate supplies of wood for future building and manufacturing, and to protect the nation’s water supply. However, it soon became clear that the citizens’ desire to enjoy the unspoiled natural environment brought significant benefits to the country as well. With the establishment of the national forests in the late 1800s, the American public was granted access to the benefits of clean air, exercise, and the beauty of nature, and they were eager to claim it.

...the National Forests serve a good purpose as great playgrounds for the people. They are used more of less every year by campers, hunters, fishermen, and thousands of pleasure seekers from the near-by towns. They are great recreation grounds for a very large part of the people of the West, and their value in this respect is well worth considering.

-Gifford Pinchot, Use of the National Forests, 1907

In 1913 the Forest Service reported user statistics for the first time, and counted 1.5 million "pleasure seekers" that year, with over 1 million day visitors. Several cities leased land from the Forest Service to build municipal camps for their citizens and managed them as part of their recreation programs, bringing thousands into the forests.1 In addition, the Forest Service encouraged the building of private cabins and hotels to help alleviate the demand for services as well as ensure greater protection of the forests by having individuals and companies maintain a stake in them.2

As automobiles grew increasingly affordable after the First World War, demand for recreation facilities increased as motoring tourists poured into the nation's forests. By the 1920’s the Forest Service recognized the necessity to develop a plan to meet the ever increasing need, but was unable to procure funding from Congress. Calling for an outdoor recreation plan in 1926, an address to the Second Conference on Outdoor Recreation noted as benefits "an economic factor for keeping all our people at all life periods fit for best service," and "an educational factor for developing initiative, observation and practical knowledge."3

As society becomes more and more mechanized it will be increasingly difficult for many people to stand the nervous strain, the high pressure and the drabness of their lives. To escape these abominations, increasing numbers will seek the primitive for the finest features of life.

-Robert Marshall, The Forest for Recreation, 1933

While a comprehensive recreation plan was not put into place until 1937, the forest districts within the Forest Service managed their resources as best they could to improve recreational facilities. Overuse of popular areas had created significant degradation to the local environment as well as sanitation issues. The situation eased significantly in the 1930’s with Franklin D. Roosevelt’s New Deal and his “conservation army,” comprised of young men in the Civilian Conservation Corp. Many new roads and recreation facilities built by the CCC between 1933 and 1941 relieved pressure on the Forest Service to provide more and better services for outdoor recreation then, and continue to be an asset today.4 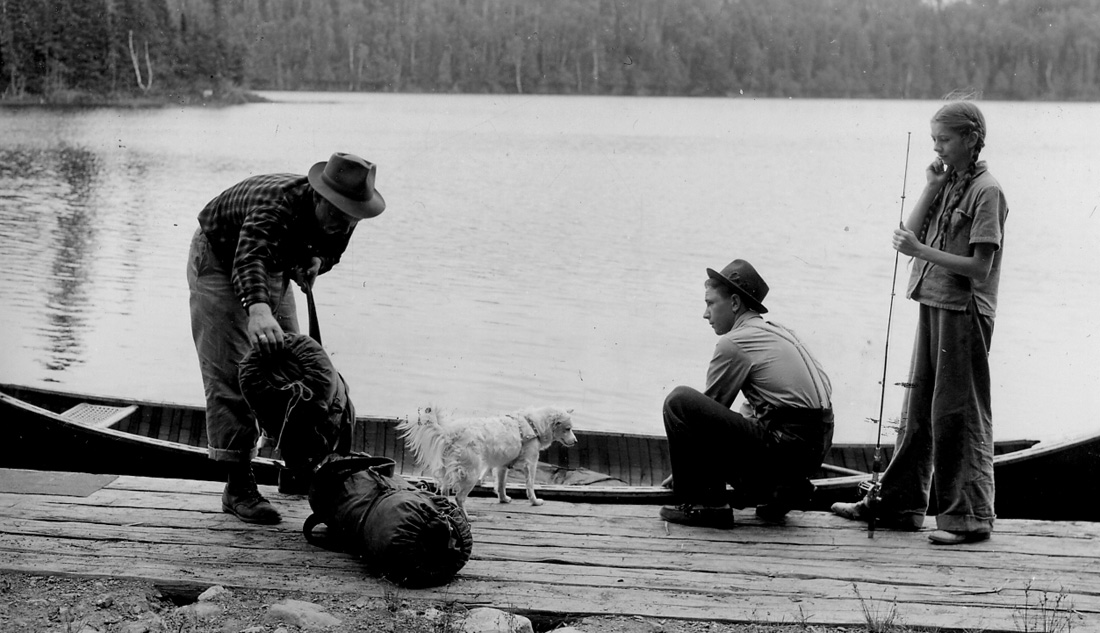 After World War II the national forests once again experienced a dramatic increase in recreational use as the nation relaxed in an era of peace and prosperity. Recreational visits increased from 18 million in 1946 to nearly 102 million by 1961.5 In 1960 Congress passed the Multiple-Use Sustained-Yield Act which established outdoor recreation as one of five equal "multiple-use" purposes of the forests (the others being range, timber, watershed, and wildlife). President Kennedy commissioned the Bureau of Outdoor Recreation in 1962, promoting outdoor recreation as a national focus. In 1964 the Wilderness Act was passed, expanding and protecting wilderness areas and creating new recreational opportunities. 1968 saw the passage of the National Trails Act, and the Wild and Scenic Rivers Act, both of which provided further recreational opportunities and protections.

To renew a man, or a woman, worn and weary, to restore them to health and spirit, is the purpose of forest recreation.

Public demand for recreational use of national forests has continued to grow, though recent surveys indicate growth at lower levels during the last 20 years. The popularity of different activities has changed as well, with activities related to observing nature ranked among the highest in a 2007 survey.6 By 2010 recreational visits numbered over 170 million annually. These included activities such as hiking, fishing, camping, hunting, skiing, horse packing, and off-road vehicle use. The 2010 numbers also represent an important impact to local economies. According to the Visitor Use Summary Report, national forest visitors added more than $14 billion overall to the Gross Domestic Product in 2010 through their financial impact on local communities.7 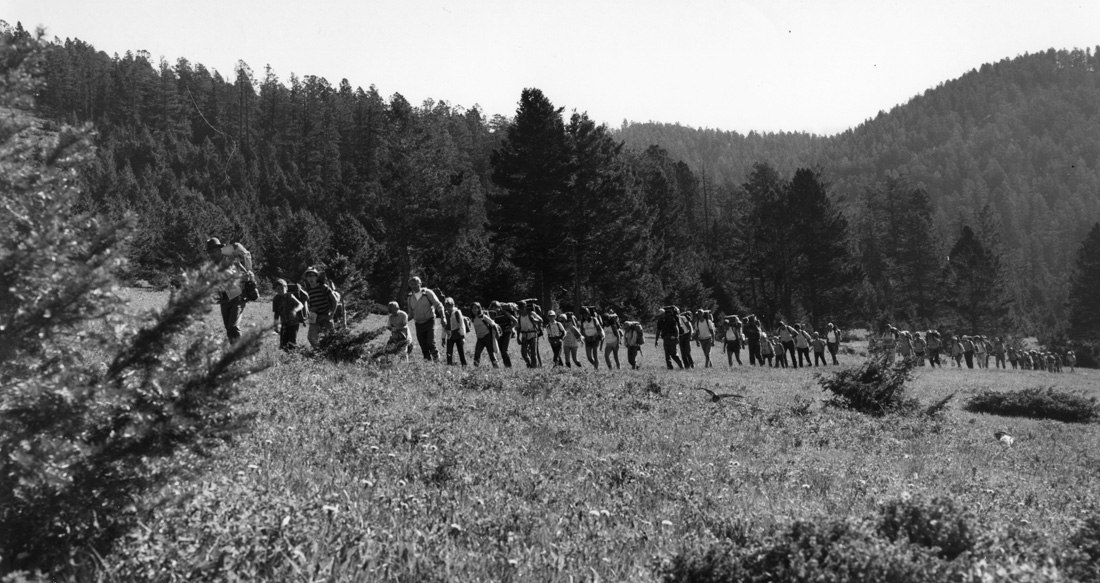 From initial protection in 1891, to the first campgrounds marked out by foresters in the 1910s, to the building of scenic roads and structures by the Civilian Conservation Corps in the 1930s, to the establishment of the national trail system in the 1960s, to the "More Kids in the Woods" campaign of 2007, it is clear the history of recreation in our national forests is rich and continues to expand. Social impacts clearly shape that history, while the human desire for direct experience with nature continues to drive it. 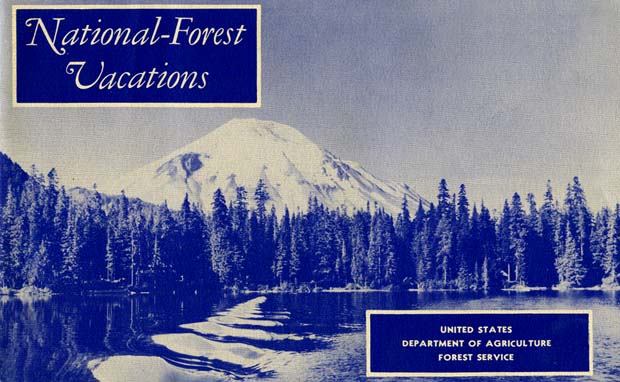 For a closer look at the importance of recreation in the national forests, as well as the challenges involved in managing resources to provide for it, see the additional online sources available on the "History of Recreation - Resources" page. You can also search for related materials in the U.S. Forest Service History Collection research database. Other related recreation pages are listed below.

1 Frank A. Waugh, Recreation Uses on the National Forests (Washington, DC: US Forest Service, 1918). Waugh was a landscape engineer hired by the Forest Service to review existing recreation facilities and report on the status. He traveled to all forest districts over five months and spoke with managing foresters at length. The report includes his attempt to place a valuation on recreational uses in the forests.