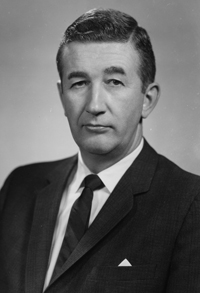 John Richard McGuire was born on April 20, 1916, in Milwaukee, Wisconsin. He graduated with a degree in forestry from the University of Minnesota. He briefly went to work for the Forest Service, then decided to go back to school to be a research forester. He earned his M.F. degree from Yale University in 1941 and worked at the Forest Service research facility on campus. When World War II broke out, he entered the Army, moving up to the rank of major with the Corps of Engineers in the Pacific Theater. After the war, he returned to the Forest Service in a research position at the Northeastern Forest Experiment Station in New Haven, Connecticut. He moved in 1950 to a research station at Upper Darby, Pennsylvania, while completing his M.A. in economics at the University of Pennsylvania. In 1962, McGuire became director of the Pacific Southwest Forest and Range Experiment Station in Berkeley, California. He moved to the Washington D.C. office in 1967, then was chosen chief in 1971, during a time of increasing environmental awareness by the public. He served as chief until 1979.

A major determinant of how well American forestry prepares for the 21st century will be cooperation in resources management. This means cooperation among federal, state, and private ownerships; cooperation across long-standing professional barriers; and cooperation with new and different arrangements of people and organizations, a trend which is becoming more evident with each passing year. The interested general public is surprisingly knowledgeable about natural resources. Yet people still need to hear forestry's message---that sound forestry practices can provide both protection and use." 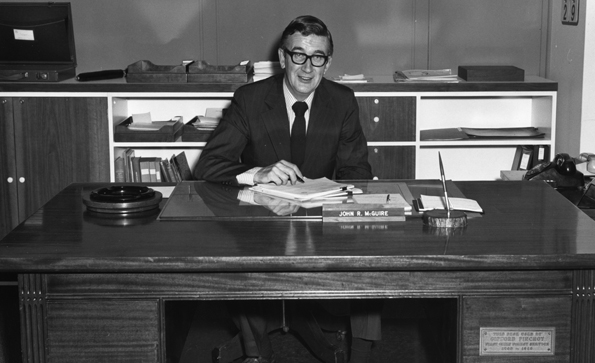 While serving as chief, McGuire made changes to strengthen the roles of the branches of state and private forestry and that of research to help implement the Forest and Rangeland Renewable Resources Planning Act (RPA) of 1974 and the National Forest Management Act of 1976. McGuire faced increasing opposition to forestry practices being carried out on the national forests. Most notable was the Congressional hearings over clearcutting on the national forests. The hearings came about after a report of a committee headed by University of Montana School of Forestry Dean Arnold Bolle on clearcutting on the Bitterroot National Forest in Montana and a lawsuit over clearcutting on the Monongahela National Forest in West Virginia. McGuire was instrumental in having the Forest Service review, then change forest management practices, modify and integrate its methods of land management. Major issues facing the chief were the roadless area review and evaluation (RARE) and RARE II decisions, mounting controversy over the management of national forests, and new direction from Congress which mandated planning at the national forest, region, and national levels through the Resources Planning Act of 1974 and the National Forest Management Act of 1976.