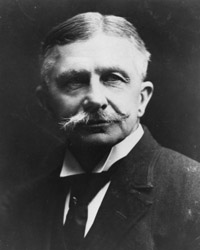 Born in Prussia, Bernhard Eduard Fernow had been groomed to run his uncle’s substantial estate. He served in the Prussian Forest Service for seven years and completed his forestry training at the Forest Academy at Muenden. Instead of fulfilling his family duty, though, he traveled to the United States in 1876 to attend the American Forestry Association (AFA) meeting and to reunite with his American-born fiancée. He married and became a United States citizen.

Fernow quickly got involved in the budding forest preservation movement. As the only trained forester in the country until 1891, his ideas garnered attention and carried much weight. Moreover, his position as executive secretary of the AFA from 1883 to 1895 and as chief of the Division of Forestry from 1886 to 1898 put him in a position to steer the forest preservation movement toward embracing forest management. In his dual roles, he was pivotal in publicizing the cause of forestry from a scientific standpoint. Fernow’s appointment as the third chief of the Division of Forestry eventually brought a shift in the division’s fortunes and purpose. The division had been created to give advice to farmers and agriculturalists wanting to learn about trees and shrubbery. It was chronically underfunded and improperly staffed. He was its only trained forester and he had no forested land to manage—the federal forests would remain in the Department of the Interior until 1905.

"The work of the Division in the main is to act as a bureau of information. Hitherto such information has naturally consisted in a recital of the methods of forest administration which prevail in Europe and other countries and a presentation of the needs of our country in general, based upon an imperfect knowledge of its forest conditions. Imperfect as this knowledge is even at the present day, it is sufficient to show how wantonly our forest wealth has been and is being squandered and to demonstrate the necessity of concerted and systematic action by the Government and the people to arrest this waste in view of its threatened effects upon the future."

Nonetheless Fernow succeeded in laying the foundation for federal forest management before leaving office. During his twelve years as chief, one historian has noted, "he firmly implanted in American forestry the idea that a supply of wood was fundamental to civilization." He recruited experts around the country to contribute to scientific forestry literature while carrying out his own experiments and inspections. He gave the first college lectures on forestry in the country and suggested school curriculums, highlighting the need for forestry education in North America. Producing more than 6,000 pages of reports, bulletins, circulars, and other forms of information, he published more than his two predecessors combined. His reports summarized conditions, discussed research, and offered a blueprint for a federal forest system and a service to manage it. He worked with interested congressmen to draft forestry legislation, including the Forest Reserve Act (1891) and the Forest Management Act (1897). In 1898, he left to teach forestry at Cornell University.