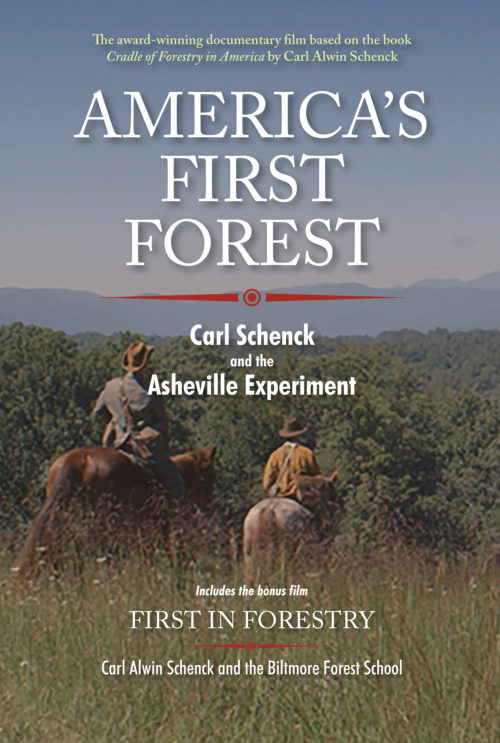 Outside of Asheville, N.C., in the 1890s George Vanderbilt built his dream home and established a working farm and forest to meet its needs. In 1895, he hired Dr. Carl Alwin Schenck, a German forester, to manage his estate's 100,000-acre forest for timber, game, fishing, and camping. Much of it needed a forester's trained hand to restore it.

With so much land to manage, Schenck began hiring young men to assist him. After three years of answering their questions, he established the Biltmore Forest School—the first forestry school in the United States. Schenck lectured in the mornings and the students worked the land in the afternoons, gaining practical forestry training in a one-year program. As Schenck noted with pride, "My boys worked continuously in the woods, while those at other schools saw wood only on their desks." Many of the nearly 400 men who graduated from the went on to become leaders in the lumber, timber, and forestry fields.

America's First Forest, the Emmy Award–winning film about Carl Schenck and the first forestry school in the U.S., is 55 minutes long. A shorter version called First in Forestry is 28 minutes long. The two films are on one DVD. The films will teach students about the impact of the industrial revolution on the American forests, and the origins of forest management, professional forestry, and the conservation movement in the U.S.

The film worksheets are designed for students to fill out while watching the films. The Discussion questions can be used either to facilitate discussion with students or for the basis of written assignments. We encourage teachers to review the questions in advance. The answers provided are designed to give teachers a starting point for discussion.

​Below are worksheets that meet NC 8th Grade Social Studies standards. The first set is for America's First Forest, the longer version of the film. (Download all four documents as one document by clicking HERE.)

These are for First in Forestry, the SHORTER version of the film. (Download all four documents as one document by clicking HERE)

These materials were made possible through funding from the U.S. Forest Service.

ADDITIONAL RESOURCES
Here are some books, articles, blog posts, and other internet resources related to Schenck and the Biltmore Forest School:

Douglas MacCleery, American Forests: A History of Resiliency and Recovery (Forest History Society, 2011). Provides a general overview of the history of human interaction with America's forest, from Native American uses of the forest to today.

James G. Lewis, The Forest Service and The Greatest Good: A Centennial History (Forest History Society, 2005). This history of the federal land management agency includes information on the early days of the forest conservation movement and forestry education.

Bill Alexander, The Biltmore Nursery: A Botanical Legacy (Natural History Press, 2007). See the chapter "A Model Forest" to understand how the forestry work fit in with the overall vision for the Biltmore Estate.

Char Miller, Gifford Pinchot and the Making of Modern Environmentalism (Island Press, 2001). An award-winning biography of Gifford Pinchot that include information about Pinchot's time as Schenck's predecessor at Biltmore Estate.

From the FHS blog Peeling Back the Bark
"ON APRIL 5, 1895, I PASSED THE STATUE OF LIBERTY..."
"On this date in 1895, Carl Schenck arrived from Germany to the United States to replace Gifford Pinchot as forester at the Biltmore Estate in Asheville, North Carolina..."

THE BILTMORE FOREST FAIR
"On November 26, 1908, Dr. Carl Schenck, resident forester at George W. Vanderbilt’s Biltmore Estate and founder of the Biltmore Forest School, opened a three-day forestry fair on the Biltmore grounds. At a time when forestry work in America was still very much in its infancy..."

CRADLE OF FORESTRY DEDICATION CEREMONY
"On this day in 1964, foresters, government officials, and others gathered near Asheville, North Carolina, at the site of the historic Biltmore Forest School..."

Jonathan Keith Esser Collection, 1899–1920
Letters written by and photographs taken or collected by Jonathan Keith Esser (1893–1963), a Pennsylvania forester and coal industry worker who graduated from the Biltmore Forest School in 1911. The materials primarily document Esser’s training while a forestry student, but also e.g. his work during 1912 while a member of a U.S. Forest Service reconnaissance team in the Southern Appalachian Mountains region.

Images from "The Dawn of Private Forestry in America, Recollections of a Forester Covering the Years 1895 to 1914," a manuscript by Carl Alwin Schenck, 1954
Includes 186 black-and-white photographic images dating from the 1890s to the 1910s that supplemented the written memoirs of Carl Alwin Schenck (1868–1955), who managed the Biltmore Estate woodlands and founded the forest school there.

Forestry Lectures of Carl Alwin Schenck, 1904–1909
Dr. Carl Alwin Schenck's lectures on the topics of forest policy and forest protection, published in 1904 and 1909. Schenck gave these lectures to students attending the Biltmore Forest School, and decided to publish them because few relevant forestry education textbooks existed in the United States at that time.

The Biltmore Forestry Fair Collection, 1908–1909
Collection of seven articles published in American Lumberman magazine from September 1908 to January 1909 reporting on the Forest Festival held November 26–29, 1908, at the Biltmore Estate in Asheville, North Carolina. The event spotlighted scientific forestry techniques for guests including industry representatives, foresters, and others.

Biltmore Forest School Alumni Reunion, 1950 (PDF)
A single item: Flowers for the Living, a 31-page booklet published by The Biltmore Reunion Committee to commemorate a reunion of alumni of the Biltmore Forest School held from May 28–31, 1950, at the George Vanderbilt Hotel in Asheville, North Carolina. Former teachers and students attended the reunion, where they reminisced about their experiences at the school and about the school's founder and director, Dr. Carl Alwin Schenck.