If Trees Could Talk Modules 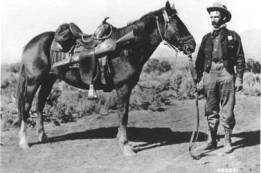 A New Profession Takes Seed has students examine the birth of American professional forestry and learn what foresters do. Forestry began in the United States during the Progressive Era, when the federal government began applying scientific management principles to environmental issues, college forestry programs were established, and a foresters formed a professional organization to foster the exchange information and ensure a proper code of conduct. Foresters in the first half of the 20th century emphasized timber production over other uses of the forest. Today's foresters engage in a broad range of activities to manage ecosystems with numerous objectives in mind, including the extraction of raw material, outdoor recreation, water quality, conservation, and aesthetics.

Teacher Preparation:
Download and print Module 5 Teacher and Student PDFs using Adobe Acrobat and make copies of the student pages, one per student.

Set the stage for this activity by writing the following quote on an overhead sheet or blackboard. Do not include the author of the statement or date.

“Any fool can destroy trees. They cannot run away; and if they could, they would still be destroyed – chased and hunted down as long as fun or a dollar could be got of their bark hides… God has cared for these trees, saved them … but he cannot save them from fools – only Uncle Sam can do that.” -John Muir, excerpt from Atlantic Monthly, 1897

Read aloud the above passage and allow students a few moments to think about its meaning. Lead a group discussion based on the following questions:

Distribute the "New Profession Takes Seed" essay, Worksheet 1, and Worksheet 2. Have students read the essay in order to complete the two worksheets and obtain background on the important topics and concepts for the lesson.

Students will read oral history excerpts to gain an “insider's” perspective on the education of early foresters and their subsequent employment opportunities. Distribute the oral histories with Henry E. Clepper, Inman F. Eldredge, and Rudolph L. Fromme and Worksheet 3. Students should complete the worksheet based on the essay, the oral histories, and class discussion.

Ask students to brainstorm about the meaning of the word profession. As a class, compose a list of professions and then create another list that includes characteristics common among most of the professions. Distribute "Forestry Follows the Professional Path" and Worksheet 5. After students complete Worksheet 5, write the following passage on an overhead sheet or the blackboard.

On March 26,1903, President Theodore Roosevelt addressed the newly formed Society of American Foresters and among other things he stated the following:

“You have created a new profession of the highest importance, of the highest usefulness to the State, and you are in honor bound to yourselves and the people to make that profession stand as high as any other profession, however intimately connected with our highest and finest development of a nation. You are engaged in pioneering work in a calling whose opportunities for public service are very great. Treat that calling seriously; remember how much it means to the country as a whole.”

Ask students to respond to the quote by answering the following two questions:

Choose from one of three types of activity assessments: