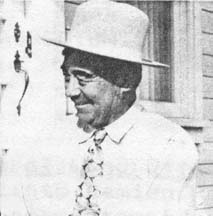 For 31 years and two months, Jacinto Damien Reyes served as District Ranger of the Cuyama District in what is now the Los Padres National Forest of southern California. During Reyes' decades on the district -- considered at that time to be the longest stint by a Forest Service employee at any one station -- he witnessed a world of change.

Jacinto Damien Reyes was born in 1871 in San Buenaventura-by-the-Sea (Ventura), California, remained there through his schooling, then moved to his family's ranch in Cuyama where he worked and lived for the next 43 years (near what is now the Los Pinos Ranger District of the Los Padres National Forest). He moved to nearby Ojai in his final decade. Reyes' great grandfather, Juan Francisco Reyes (1747-1809), was a member of the Portola Expedition that arrived in (Alta) California in 1768.

In his three decades as a ranger, Reyes served under six different Forest Supervisors, saw his Santa Barbara Forest Reserve change names at least three times, witnessed the transfer of his agency from the Department of the Interior to the Department of Agriculture, and escorted two U.S. Presidents -- William McKinley and Theodore Roosevelt.

Throughout his employment, Reyes' district was considered one of the most remote of any in the nation. He later recalled, "When I started in the work under the Interior Department we had a very limited mileage of trails in the district. In fact, one primary trail of low standard that led across the Forest from my district to the town of Ojai was the most important, and the settlers in the upper Cuyama Valley obtained their supplies and mail by way of a pack train over this trail. The nearest town on the San Joaquin Valley side of the Santa Barbara that was of any importance was Bakersfield, but since that time oil has been discovered on the western edge of the San Joaquin Valley and the towns of Taft and Maricopa have sprung up where nothing but cattle grazed when I first moved into the country. The distance from my headquarters to Maricopa is approximately 37 miles, and we have a road to Maricopa that is passable most of the year, although it is simply a winding dirt road up the Cuyama River, crossing the creek many times. Communication was practically nil when I went into the Service, and it required from a week to ten days to get mail from the Supervisor's office." 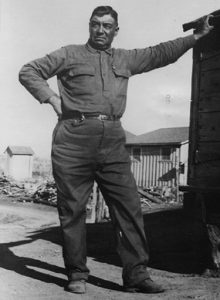 Several of Reyes' relatives were among the other pioneering Hispanics hired as rangers by the Forest Service. J.D.'s brother, Geraldo, was appointed in July 1902, and a cousin, Alfredo Ortega, also began in the early 1900s. According to the U.S. Department of the Interior's General Land Classification Book's List No. 31 (January 1905), which identified employees transferred to the U.S. Department of Agriculture along with the Forest Service, the agency appointed three other Hispanics to posts between 1900 and 1905. Each of these -- Hermogenes Ortega, Isidro Soto, and Alfredo de la Riva -- served on the Santa Barbara Forest Reserve where J.D. Reyes was stationed.

J.D. Reyes entered the Forest Service in September 1900, and retired on October 31, 1931, at the age of 60. In 1930 near the end of his tenure with the Forest Service, Reyes recalled how in 1854 his father ran 2000 head of cattle through Tejon Pass from Los Angeles to settle at the head of the Cuyama Valley. Reyes noted that Los Angeles, at the time of his father's youth, was "little more than a cluster of adobe buildings around the old Spanish plaza."