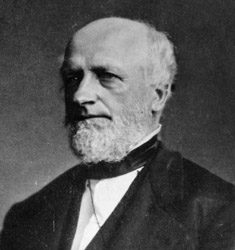 Franklin Hough, 1st chief of the U.S. Division of Forestry

Franklin B. Hough (1822–1885) was trained as a physician but had a long-standing interest in botany, mineralogy, and nature. After retiring from his medical practice in 1852 to pursue his literary interests (he published a couple of histories on the Adirondack region of New York, where he lived), he served as superintendent of the New York State census in 1855 and again ten years later. When looking at data for the 1865 census, he recognized a declining trend in the availability of timber. He confirmed this with data from the 1870 national census. This discovery caused him to take up forest preservation as his life’s work.

Hough presented a paper at the August 1873 meeting of the American Association for the Advancement of Science. His paper, "On the Duty of Governments in the Preservation of Forests," presented the case, first articulated by George Perkins Marsh in his book Man and Nature (1864), that the Mediterranean countries had overused their resources—especially trees—and caused irrevocable harm to the environment. He proposed that the federal government take action immediately—even outlining plans and laws to be enacted—to prevent the same thing from happening in the United States. Impressed, the association petitioned Congress to fund a position to study the situation. Three years later, Congress approved $2,000 for the job and Hough received the appointment as special forestry agent. On August 30, 1876, he became the first federal expert on forestry with the duty to investigate the forest and lumbering situation in the U.S.

By then, Hough had spent five years gathering data from around the U.S. and from countries around the world. He compiled the data into the massive Report on Forestry, the first of four reports highly critical of contemporary attitudes and practices. The reports laid a solid foundation for serious discussion of American forest conditions at the height of the Industrial Revolution. In 1881, the position of federal forestry agent was elevated to division status, and the U.S. Division of Forestry (the predecessor to the U.S. Forest Service) came into being. Yet his repeated calls for the management and withdrawal of the remaining forest land within the public domain continued to be ignored.

Hough pressed on, turning out reports and books, even launching the short-lived American Journal of Forestry in 1882. In 1883, Hough was demoted back to forestry agent and replaced with Nathaniel Egleston by Commissioner of Agriculture George B. Loring, a fellow physician who personally disliked Hough. Hough remained with the division, and though unhappy continued to do stellar work. Two years later he stepped down shortly before his death. Hough continues to be regarded as the first leader of the American forestry movement and is sometimes called "the father of American forestry."

"The experiences of pioneer life, as regards the timber, present little that can be commended and much that can be blamed. It has been observed in all countries and at all periods, that trees furnishing products demanded by commerce, or standing in the way of cultivation, become an object of inconsiderate waste, and not unfrequently to such degree that the markets are overstocked, and ruin is brought upon the greedy but thoughtless adventurers in a business liable to bring an over-supply."