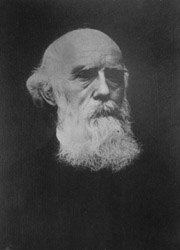 A Congregational minister and educator by training, Nathaniel Egleston took an interest in forest preservation in part to preserve the rural way of life he saw deteriorating all around him following the Civil War. The lure of better jobs in urban areas was draining off the young men and women of the New England countryside. Egleston, concerned about the influence of the Industrial Revolution on both the landscape and demography, came to believe that making towns more beautiful through tree planting might help stem the tide. He began writing books and articles for a variety of magazines along those lines and became one of the vice-presidents of the American Forestry Association in 1882 shortly after its founding.

The following year, U.S. Commissioner of Agriculture George Loring appointed his friend Egleston to replace the capable and prolific Franklin Hough whom Loring disliked, as chief of the Division of Forestry. Neither suited for the job nor a strong administrator, Egleston floundered as chief but did offer some ideas that were later acted upon. In his first annual report he suggested that the federal government should ensure that the extensive federal forest lands in the public domain were properly cared for and were used for the general welfare. He also recommended that the federal government establish forest experiment stations.

"The trees are man’s best friends; but man has treated them as his enemies. The history of our race may be said to be the history of warfare upon the tree world. But while man has seemed to be the victor, his victories have brought upon him inevitable disasters."

A new presidential administration in 1885 brought a new commissioner of agriculture, Norman J. Colman. He did not ask for, nor did Egleston volunteer to provide, a plan for the division. Egleston couldn’t even get a meeting appointment with him. When Colman requested and received Egleston’s resignation, he waited a month before returning it to the chief. Egleston spent the next year "befuddled by indecision and uncertainty…meekly wait[ing] to be fired," according to historian Harold Steen. Eventually, he was demoted but contentedly stayed on as a clerk for the next twelve years.