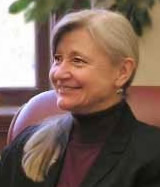 Abigail Kimbell, the 16th chief of the Forest Service, grew up in New England, where she spent her formative years hiking, fishing, and camping on the White Mountain National Forest. Born on January 9, 1953, in Boston, Massachusetts, Gail earned a bachelor's degree in forest management from the University of Vermont in 1974 and later a master's degree in forest engineering from Oregon State University. She worked as a seasonal employee before beginning her federal career in 1974 with the Bureau of Land Management in Medford, Oregon. She then joined the Forest Service as a pre-sale forester in Kodiak, Alaska, in 1977. She next worked in Oregon as a logging engineer and then a district planner. She served as a district ranger in Kettle Falls, Washington, from 1985-88, and in La Grande, Oregon, from 1988-91, and as forest supervisor of the Tongass National Forest in Alaska (1991-97) and the Bighorn National Forest in Wyoming (1997-99).

Those positions prepared her for a quick succession of jobs from 1999 to 2002. During that time, she was the forest supervisor for the Pike and San Isabel National Forests and the Comanche National Grassland—all in Colorado—as well as the Cimarron National Grassland in Kansas. In May 2002, Kimbell began work as the associate deputy chief for the National Forest System branch. Forest Service chief Dale Bosworth, who appointed her as Region 1 Forester in December 2003, noted, “As associate deputy chief, Gail demonstrated tremendous leadership in helping to carry out the Healthy Forests Initiative and provided support to the Administration and Congress in the development of the Healthy Forests Restoration Act of 2003…” The act was aimed at reducing fuel loads on national forests, but was widely criticized by environmental groups for allowing cutting with minimal oversight and regulation. Kimbell remained as regional forester until her appointment as chief in January 2007. She is the first woman appointed to the position. As chief, she continued carrying out work under the Healthy Forests Act that she helped initiate.