William B. Osborne, Jr. was born November 25, 1884 in Rochester, New York. Following graduation from Yale Forest School in 1909, Osborne took a job as forest assistant on the Oregon National Forest (which later became Mt. Hood National Forest). There he immediately began influencing the Forest Service's fire detection policy, helping install the first forest fire lookout in the Northwest in 1911 and establishing a central fire dispatching system in 1913. It was also during Osborne's spare time, working in his home workshop over the winter of 1910-1911, that his greatest contribution came about. Osborne built a "firefinder" using a map mounted on a rotating steel disc with attached brass sighting mechanisms. The device allowed lookouts to accurately map the location of forest fires based on sighting the distant smoke.

Osborne's invention was immediately put into use by the Forest Service in Oregon. The forest rangers and lookouts found the instrument's accuracy astounding, and in 1913 the Osborne Firefinder began to be commercially produced by Leupold-Volpel & Company. 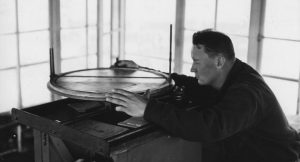 Various modifications and developments were made to the firefinder over the next 30 years. Osborne added more powerful scopes for sighting, more precise calibration, and various other technological developments which increased the instrument's accuracy. The Osborne Firefinders were widely used throughout the country by the Forest Service over the 20th century. Production of the instruments by Leupold-Volpel & Company (later renamed Leupold & Stevens) ended in 1989, but new Osborne Firefinders continue to be produced by various companies today.

Other than six months serving in the military for World War I, Osborne spent 44 years working for the Forest Service, during which time he made numerous contributions in addition to the firefinder. He contributed important scientific research on atmospheric humidity and its effect on forest fire behavior, wrote an influential forest fire manual, invented various fire fighting tools, as well as developed a device for obtaining accurate 360-degree panoramic pictures of the forest landscape. Osborne was also in direct charge of a number of large forest fire fights in the Pacific Northwest over his Forest Service career.

Osborne never received any payments as a result of his firefinder, but that was never his intention. He developed the device solely for the purpose of improving forest fire detection so as to limit the destructive wildfires of his era. Osborne passed away in October 1955, but his name will be forever linked with his invention, as well as the greater history of forest fire control.

View a profile of William B. Osborne and his invention, the Osborne Firefinder, in this video clip from the Forest History Society YouTube Channel.