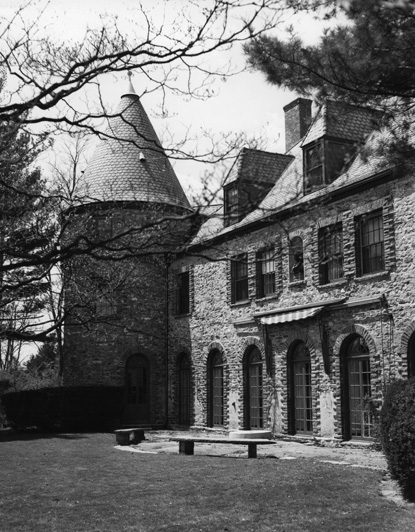 The history of Grey Towers and the role that the home has played in American history are intertwined. The land on which James Pinchot chose to build his family’s first home had once belonged to his father. His father had clearcut the forest, a practice James came to detest. By building Grey Towers on that property, James could begin to heal the land that his family had damaged for profit. As proof of his interest in repairing the land, James undertook extensive plantings.

James hired his friend Richard Morris Hunt, the famous architect, to design the 43-room summer home. Though James was quite wealthy, this was the first home that he had built for his family. Prior to this, the family had shared homes owned by Mary’s family. Construction of the Grey Towers began in 1885 and held great anticipation for the Pinchots, especially Gifford. After a visit to the worksite with his brother Amos and their father in the spring of 1886, Gifford wrote his mother, "I cannot tell you how entirely it met my expectations & how I want to get into it….It is with great difficulty that I can talk of anything else." The family marked Gifford’s twenty-first birthday on August 11, 1886, by having the family’s first meal in the new home. 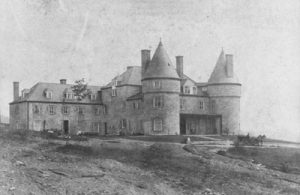 During the first decade the family occupied Grey Towers, it served as a summer home for the family and the many famous friends they hosted there. General William Sherman visited so often he had his own bedroom. However, the family’s primary residence remained in New York City during that period. After Gifford’s appointment as chief forester in 1898, the primary residence soon shifted to Washington, D.C. While chief, Gifford spent limited time at Grey Towers, but when he did, the opportunity for rest and recreation was welcomed. Family members enjoyed activities such as tennis, bowling, and fishing there. At various points, the grounds contained a squash court, tennis court, and a swimming pool. James delighted in hosting the summer camp for the Yale Forestry School and having the students around. He even turned over the Garden Cottage, a house he had constructed for the gardener near the walled garden around 1890, for use by the Yale faculty.

After Gifford’s dismissal from the Forest Service in 1910, Grey Towers became his legal residence. Political opportunity appeared greater for him in Pennsylvania than in New York, so he changed his legal residence to Milford. After Gifford married Cornelia Bryce in 1914, the two transformed the house in numerous ways. One of the first modern "power couples," Gifford and Cornelia did extensive landscape remodeling around the grounds, especially close to the house, probably motivated in part by their frequent bids for elective office (besides Gifford’s runs for U.S. Congress and Senate, and governorship of Pennsylvania, Cornelia ran for Congress three times, and once for governor). They built the Bait Box for their son, Gifford Bryce, as a playhouse and added the Finger Bowl for outdoor dining. Cornelia personally oversaw extensive renovations of the house’s interior, putting her own mark on the structure. In the late 1920s and early 1930s, Gifford and Cornelia held an annual summer picnic for local residents, no doubt to ingratiate themselves with the local voters. In the 1940s, Grey Towers became Gifford’s year-round residence, and he lived out his remaining years there. 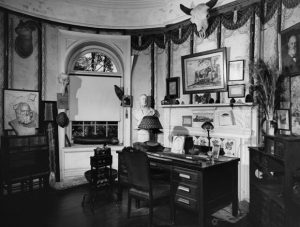 After the estate was divided between Amos and Gifford around 1917, Amos and his family occupied the Garden Cottage, which served as their frequent retreat until his death in 1944. His descendants continue to make use of the home to this day.

After the Forest Service took possession of Grey Towers in 1963, the house underwent renovation to make it more suitable for hosting meetings and conferences. In 2006 extensive renovations and restoration work on the house and surrounding landscape were completed and incorporated several environmentally friendly and sustainable measures into the work. The family still owns the majority of the land adjacent to Grey Towers, and continues to show an interest in forest conservation. Peter Pinchot, a grandson of Gifford and Cornelia who is a community forester, has begun restoration work at the Yale camp site and has also revived research on the Milford Experimental Forest.