Margaret March-Mount began working for the U.S. Forest Service in 1913, as a clerk on the Bighorn National Forest, in Wyoming. Growing up in southern Illinois and Kansas, she witnessed erosion from wind and rain. As an employee of the Forest Service, she envisioned a nation of healthy trees, and began writing and speaking about the benefits of planting trees. In 1928, she transferred to Munising, Michigan as an administrative assistant on the Marquette (now Hiawatha) National Forest. Her public relations work there propelled her onward and upward to the newly established headquarters office for Region 9, in Milwaukee, Wisconsin. According to the Milwaukee Journal, the federal civil service commission listed her official title as "assistant information specialist." Others described her as "director of women's forest activities," "woman ranger," "woman forester," and "ambassador of the trees." Miss March-Mount liked "ambassador of trees" best. 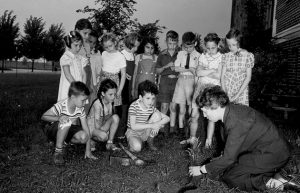 Margaret March-Mount, Associate Information Specialist in charge of Women's Educational Activities, planting a tree while a class looks on, Wisconsin, 1940.

March-Mount worked with women's clubs and school children to encourage fire prevention and tree planting in Uncle Sam's forests. Her "pennies for pines" Children's Conservation Crusade encouraged children to give pennies for planting pine trees on national forests (the Forest Service could plant 1,000 seedlings for every $4 received). The program led to the planting of nearly 6 million trees on 6,000 acres by 1940. Much of the program's success could be attributed to the work of March-Mount, who was called the "Penny Pines Apostle of Region 9."

In a 1942 interview with the Washington Post Miss March-Mount commented that "we spend billions for bombs. Let us encourage the children to invest pennies for pines. Bombs explode, pines grow." This same article credits Margaret March-Mount with motivating the national Daughters of the American Revolution (DAR) to plant 5 million seedlings in 36 states and the District of Columbia. 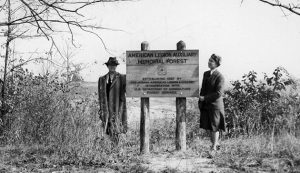 Margaret March-Mount retired from the Forest Service in 1943 and moved to Hollywood, California. She was a personal friend and colleague of Carl A. Schenck and in 1950 was awarded an honorary degree from the Biltmore Forest School.