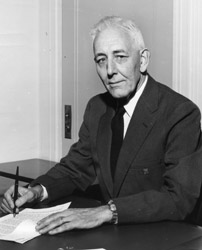 When John Sieker received his promotion to chief of the Forest Service's division of recreation and lands in 1941, the advance must surely have seemed bittersweet. Sieker, after all, found himself in the position most recently filled by the agency's wilderness champion Bob Marshall, who had died unexpectedly before reaching his 40th birthday.

Despite any painful associations taking over for his friend Marshall might have brought, Sieker proved able and well-suited to the job of supervising more than 4,600 campgrounds, 14 million acres of wilderness areas, and many other recreational sites such as summer cabins, ski areas, lodges, and resorts. In fact, Sieker remained the head of the recreation and lands division for more than two decades, before retiring in July 1964.

In Wyoming, Arizona, and elsewhere, Sieker and Bob Marshall became well-acquainted on multi-week wilderness hikes together, and apparently agreed on many points relating to wilderness preservation and forest and recreation management. At Marshall's recommendation, in April 1938, the Forest Service appointed John Sieker to a Washington, D.C.-based position as assistant chief of the recreation and lands division he would later lead. Just nineteen months after Sieker arrived in Washington for his new position, his boss and friend Marshall died of a sudden heart attack in November 1939 and Sieker became acting chief until his permanent promotion.

During World War II, Sieker served as a captain in a field artillery division in the Pacific, then returned to the Forest Service. Sieker's subsequent work with the Forest Service's recreation and lands division came at a critical time, as post-war recreation visits boomed. During his tenure, recreation visits to the national forests quadrupled and issues such as wilderness preservation, recreation as a multiple use, and user conflicts increasingly drew public attention.

In a 1978 interview, John Sieker reflected on his career and his association with Bob Marshall. At that time, Sieker wondered if he might be the last living friend of Marshall's who had accompanied him on his legendary wilderness hikes. Though Sieker himself was due a fair amount of credit and played a role in the addition of lands to the wilderness system after Marshall's death, he chose instead to focus on his mentor and friend: "Bob Marshall painted with a broad brush. He advocated including everything [as wilderness] that was substantially roadless and over 100,000 acres. Bob Marshall drew a lot of the [wilderness] boundaries. Substantially all the land that went into the Wilderness System was land that Bob Marshall knew of and had suggested..."