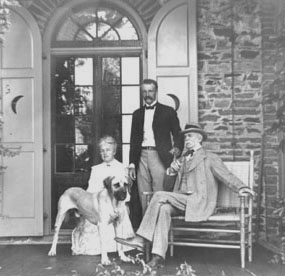 Grey Towers, located in Milford, Pennsylvania, was originally the summer estate of the James Pinchot family and later the primary home of Gifford Pinchot. James was born and raised in Milford, where his father and grandfather had emigrated to after leaving France. Although they operated a dry goods store, they made most of the family fortune in land speculation and lumbering. They practiced the kind of destructive lumbering that Gifford would devote his career to stopping.

In 1850, at age nineteen, James left the small dusty village of Milford for New York City to seek his own fortune. He entered the mercantile business and soon was selling expensive imported Victorian wallpaper, window shades, and curtains to the hotels and large homes then being erected in Manhattan. He did so well that he retired in 1875 at age forty-four "to devote the balance of his days to forestry and horticulture." The construction of Grey Towers in the 1880s later allowed him to do just that.

James apparently was persuaded to retire by his wife, Mary Eno Pinchot. James had met Mary, the eldest daughter of a wealthy New York merchant and landowner, while on the social circuit in New York. Attractive and smart, with a forceful personality not to be trifled with, Mary proved an ideal complement to James. After a relatively short courtship they married in May 1864. The following August they welcomed their first child, Gifford, whom they named for his godfather and their close friend, Sanford Gifford, the renowned landscape painter. It was the first of many famous and powerful people to whom James and Mary would introduce their son. Their wealth would make Gifford’s career possible; their beliefs would make his career in public service unavoidable. 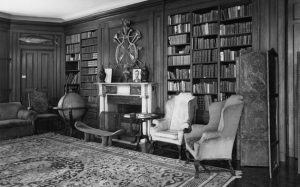 The library at Grey Towers.

Mary appealed to James to retire so he could dedicate more time and effort to civic responsibilities and to serve as a role model for their children: Gifford, Amos, and Antoinette. At the time, Gifford was in college but Amos and "Nettie" were school-age children. "I believe you capable of a higher development than you will get if tied down to paper hangings," she wrote him in the late 1880s. "I think it a mistake that a man of such noble aspirations and large capacity should not fill a larger sphere." Her comments to James hint at the family’s expectations for the children, especially their eldest. Indeed, Gifford entered public service and served as chief of the federal forestry agency for twelve years. Amos, who became a lawyer in part to handle the family’s estate and to free Gifford from that toil, went on to become a founder of the American Civil Liberties Union. Nettie married an English politician and moved overseas. After the death of their parents, Gifford and Amos divided the Grey Towers estate, with Gifford and his wife Cornelia taking over Grey Towers, and Amos, the Garden Cottage.