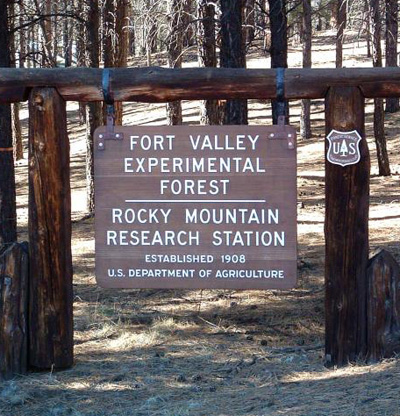 In December 1907, Forest Service Chief Gifford Pinchot requested that Raphael Zon, chief of the Division of Silvics, develop plans for permanent experiment stations devoted to scientific research on the national forests. The next year Zon traveled to Arizona, as Frank C.W. Pooler, the forest supervisor of Coconino National Forest in Arizona, suggested his forest as an ideal site for the first research location. Zon, Gustaf A. Pearson, and Willard Drake explored land on the Coconino, eventually selecting the area of Fort Valley, an isolated area near Flagstaff as the most suitable site.

In August of 1908, the Coconino Experiment Station began operating as the first Forest Service research facility in the nation. Scientist Gustaf A. Pearson was selected to serve as the sites first director, a position he would hold until his retirement in 1944.

During the 1950s, budget cuts and agency reorganization led to the decline in use of the Fort Valley site. The facilities were used intermittently over the subsequent years by outside groups, but more recent work by the USFS and Northern Arizona University have seen the site gain new importance. The Fort Valley campus is now listed on the National Register of Historic Places.