The Mann Gulch fire was first officially reported around noon on August 5, 1949, in Montana's Helena National Forest. Responding to the fire, the Forest Service dispatched fifteen smokejumpers from Missoula to the remote area. The smokejumpers were part of a relatively new Forest Service program, with the first operational jumps having been made nine years earlier in 1940. 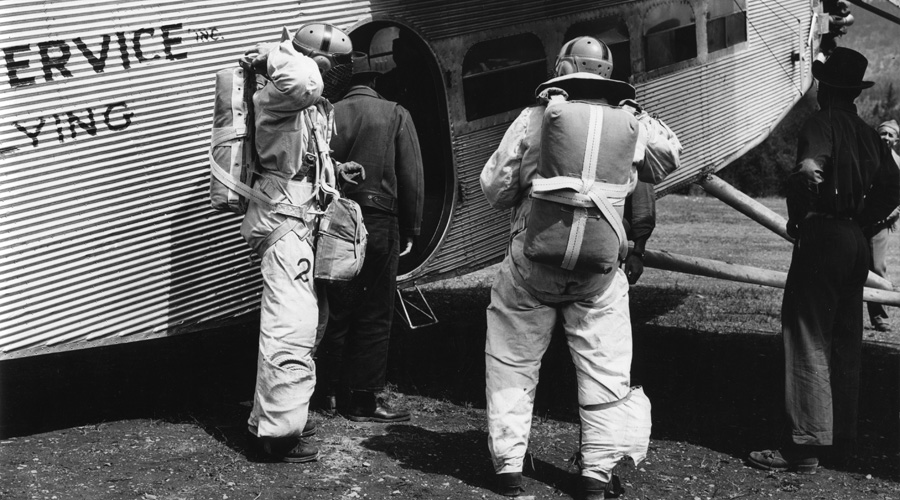 Two jumpers about to take off in Ford Trimotor plane for a practice jump, Lolo National Forest, Montana, June, 1941.

The fifteen smokejumpers landed at Mann Gulch about a half-mile away from the fire. There they met James O. Harrison, a fire guard from the nearby Meriwether Canyon Campground. Ironically, Harrison had quit the smokejumpers the year before because of the danger. As the men headed down the gulch towards the Missouri River, high winds caused the fire to suddenly expand, cutting off the men's route and forcing them back uphill. Later studies estimated that the fire covered 3,000 acres in ten minutes during this blow-up stage.

To escape the advancing fire, now less than 100 yards away, crew foreman R. Wagner "Wag" Dodge ordered the men to drop their equipment and run back up the steep, rocky hillside. As the men retreated, Dodge stopped to set a small escape fire, creating a burned-over area that the fire would bypass. He directed the group towards this safe area, but due to the reigning confusion the rest of the men continued up the hill. As the massive fire overtook the group, two of the smokejumpers, Walter B. Rumsey and Robert W. Sallee, were able to find shelter by climbing inside a small crevice in the canyon's rock wall. Of the sixteen men on site, Dodge, Rumsey, and Sallee would end up as the only survivors.

The events of Mann Gulch greatly influenced the future of wildfire suppression and fire research. The Forest Service designed new training techniques and implemented additional safety measures for its firefighters. The agency also increased emphasis on fire research and the science of fire behavior, developing new firefighting techniques and equipment in the hopes of never repeating the tragic events of August 5, 1949. 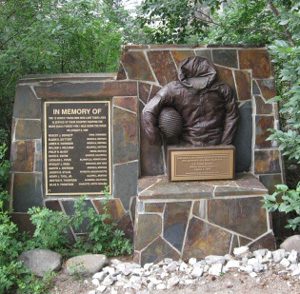 The Mann Gulch memorial, installed in 1999, located at the mouth of Meriwether Canyon.

"Visiting Mann Gulch 60 Years Later," from Peeling Back the Bark.

"Further Reflections on Mann Gulch," from Peeling Back the Bark.

Rothermel, Richard C. "Mann Gulch Fire: A Race That Couldn’t Be Won," the 1993 USFS research report on the events of Mann Gulch [PDF].

To see a visual record of USFS smokejumping history, see the Smokejumpers gallery from the FHS Photo Collection, as well as a clip of historic smokejumper film footage from the FHS YouTube Channel.