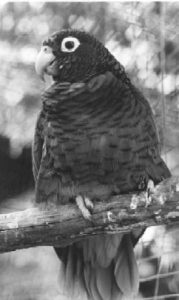 This Puerto Rican parrot, shown here at the Mayague Zoo in the western part of Puerto Rico, was a vanishing species when photographed on March 24, 1967. Listed as an endangered species that year, the few surviving emerald green birds were found only within the Caribbean National Forest. A joint project between the Forest Service and the Fish and Wildlife Service commenced in 1967 to save the foot-high parrot from extinction.

Since its listing as an endangered species, captive breeding programs have enabled successful releases of the parrot into the wild. The Caribbean National Forest maintains current information about the bird.