Wood in the Space Age: Forest Products at the 1962 Seattle World’s Fair 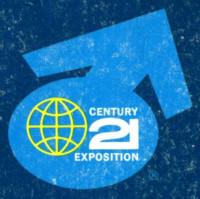 On April 21, 1962, the Century 21 Exposition (better known as the Seattle World’s Fair) opened to the public. From a vacation home in Florida, President Kennedy pressed a telegraph key to officially start the fair. The Seattle World’s Fair is best remembered for the Space Needle, which became an enduring Seattle landmark, as well as the still-operating monorail line. A forgotten aspect of the fair, though, is just how prominently wood products were utilized and featured throughout the exposition.

In addition to the use of wood by the architects of many of the fair’s buildings, multiple exhibits specifically highlighted forest products and the importance of our forest resources. These included the Home of Living Light, the Home of the Immediate Future, the Forest Industries Theater, as well as the Society of American Foresters area. Various photographs and materials from the FHS Archives document these exhibits, and the overall use and promotion of wood at the fair. 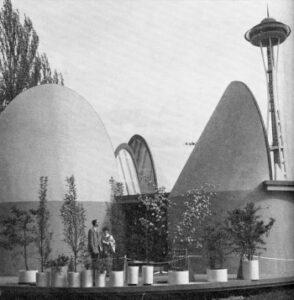 An exhibit area sponsored by the Douglas Fir Plywood Association, the “Home of Living Light” was intended to highlight unique ways to use plywood in home construction. The sample home on display featured two bedrooms, two bathrooms, and 2,500 square feet of living area, along with 2,000 square feet of deck area surrounding the home on three sides for outdoor living space. Most uniquely, the interior rooms were all rounded in shape, as having no corners was said to provide more efficient use of space. The house’s furniture and appliances were custom-made to fit these unique shapes (here’s a view of a family in the living room). The highlight of the Home of Living Light, though, was undoubtedly the six hemi-paraboloid domes of molded plywood and transparent acrylic plastic. Each dome featured a skylight that could be rotated on circular tracks from within the home to follow the sun and produce shadow free lighting all day. 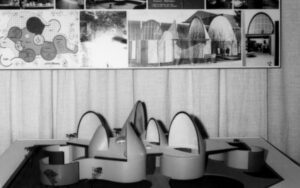 Display model of the Plywood Home of Living Light.

This unique home design of prefinished, molded plywood came from the architect firm of Liddle and Jones in Tacoma (here’s a look at the construction process). Though the design was not widely adopted due to its high construction cost, there was a demand for this specific building. Following the fair, the Home of Living Light was sold, loaded on a barge and floated down the Puget Sound where it was remodeled as the Jacaranda Restaurant. Located at the northern end of the central Olympia peninsula, the restaurant was renamed and remodeled several more times in the ensuing decades before ultimately burning down in 2002. 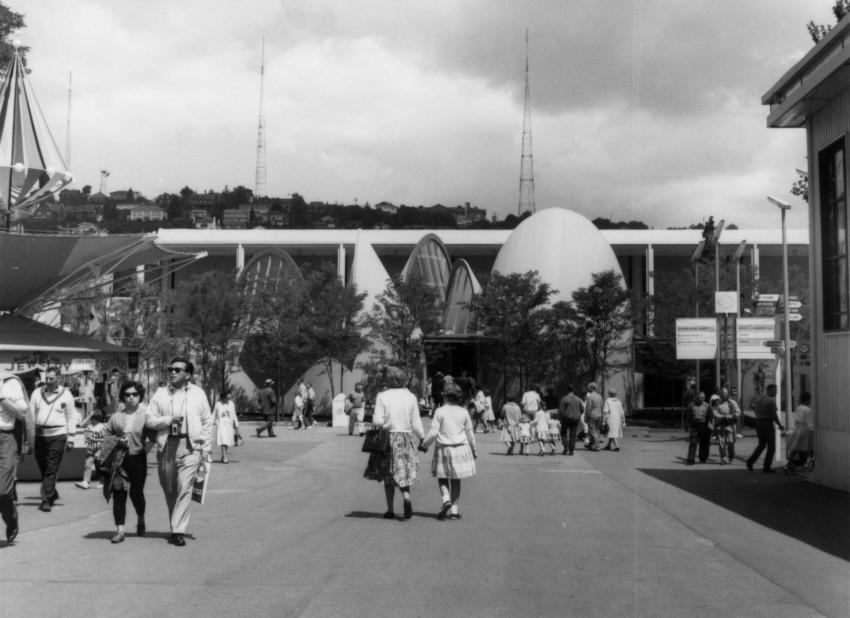 View from a distance of the Plywood Home of Living Light.

Home of the Immediate Future 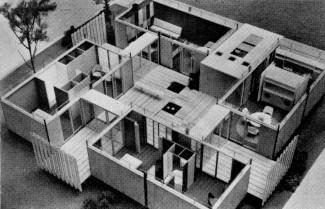 View of the separate modules in the Home of the Immediate Future.

Sponsored by the United States Plywood Corporation, the “American Home of the Immediate Future” served as more of a practical yet still futuristic home display. Designed by architect Robert Martin Engelbrecht, this display house was built of stressed-skin plywood broken up into four separate modules, all connected by a central courtyard. These four units were designated as: “living module, parents’ module, kitchen and family module” and “children’s module.” According to the fair’s official press book, this was “a house designed to demonstrate the versatility and adaptability of building materials [as] an example of one way in which the building industry is meeting the challenge of a shrinking world. The Home of the Immediate Future surrounds the land with house instead of surrounding the house with land.” The architect Engelbrecht also commented that “if our homes were mass produced, I estimate the cost at two to three thousand dollars for each module.” (The national median cost for a home in 1962 was around $19,000.) The intent was for prospective homeowners to order as many modules as needed, and then have these pre-fabricated elements delivered and connected together on the lot. 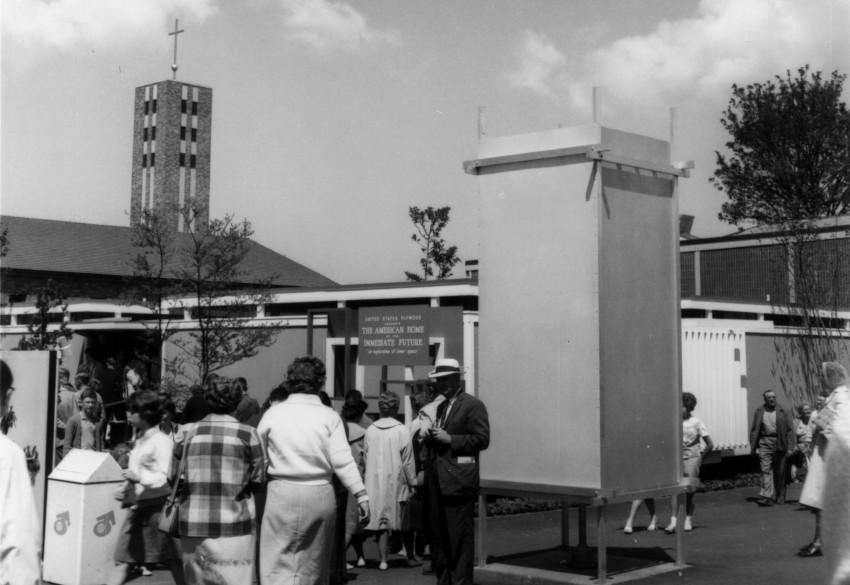 Crowds lined up outside of the Home of the Immediate Future. 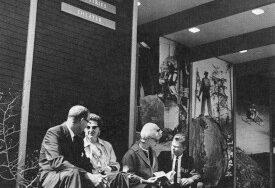 Group sitting outside the Forest Industries Theater (click to enlarge).

The centerpiece of the Forest Products Industry Pavilion area was the Forest Industries Theater. This 125-seat theater featured entrance walls with large photo murals of logging and wood production. The theater’s main purpose was to host regular showings of the film “A Tale of Two Planets,” made specifically for the Word’s Fair. As described in the official guide book, this “wide-screen color film combines live actors and on-location industrial shots to point out the contrast between a Martian-like society, where wood is unknown, and our own society, with its more than 6,000 forms of forest products.” Surrounding the theater outside were a wide variety of coniferous trees — Douglas fir, Western red cedar, Sitka spruce, West Coast hemlock — as well as the large Society of American Foresters exhibit area. 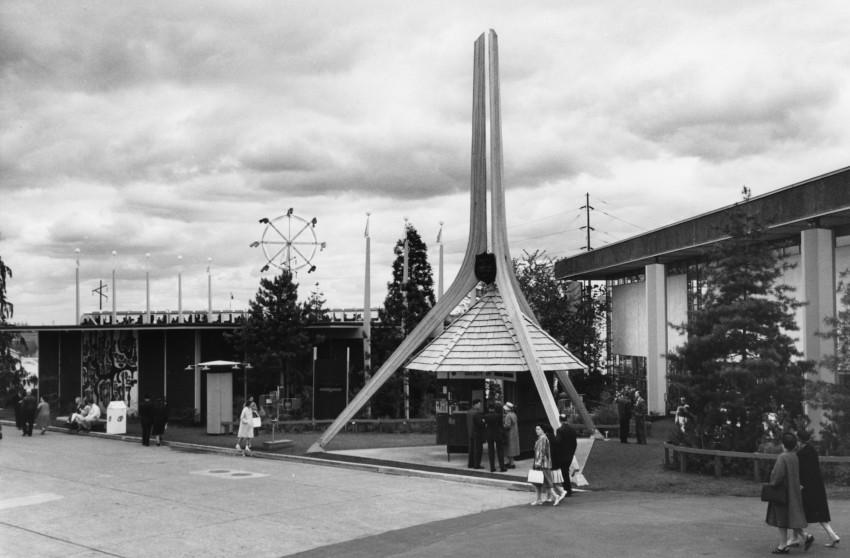 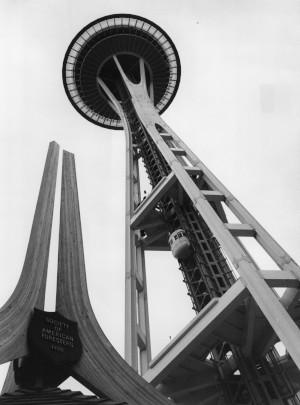 Standing near the Forest Industries Theater, and directly in the shadow of the massive Space Needle, was the Society of American Foresters (SAF) exhibit. The exhibit area was anchored by a striking information kiosk with three large laminated beams made from Douglas fir, with the SAF shield attached. Inside this attractive booth were color photos depicting the importance of the managed forest. Other displays featured pioneers in forestry including Gifford Pinchot, George S. Long, William B. Greeley and Carl Schenck. Tree branches, cones, cross-sections, and seeds were mounted in plastic throughout the exhibit, and a continuous slide show told the story of forestry and the work of foresters.

Surrounding the information kiosk were “islands” of trees spaced throughout the area, providing a welcome area of shade and green vegetation for visitors. The islands formed the basis for SAF’s “tree farm trail,” with each group of trees designed to be an exhibit area. These islands included ones on forest management, forest genetics, forest protection, recreation, and wildlife management (the latter had a live porcupine and beaver).

In addition to all these featured exhibits, wood was also prominently featured as a building material throughout the fair. The impressive Christian Witness Building featured 20 wooden arches, 6 laminated beams, and 4 laminated spire beams (see photo below). The large Bell System Communications exhibit had an imposing all-wood exterior. As a local company, Weyerhaeuser provided much of the wood products for the Fair (including the Rilco-brand laminated beams for the SAF kiosk). A company publication highlighted the various uses of Weyerhaeuser products at the fair, commenting that “one could say that much of the fair is built on Weyerhaeuser wood as well as of it.” Even as this Space Age fair — with its monorail and modular homes — showed what the future might look like, many of the buildings constructed for the fair consisted largely of wood, one of the oldest building materials. 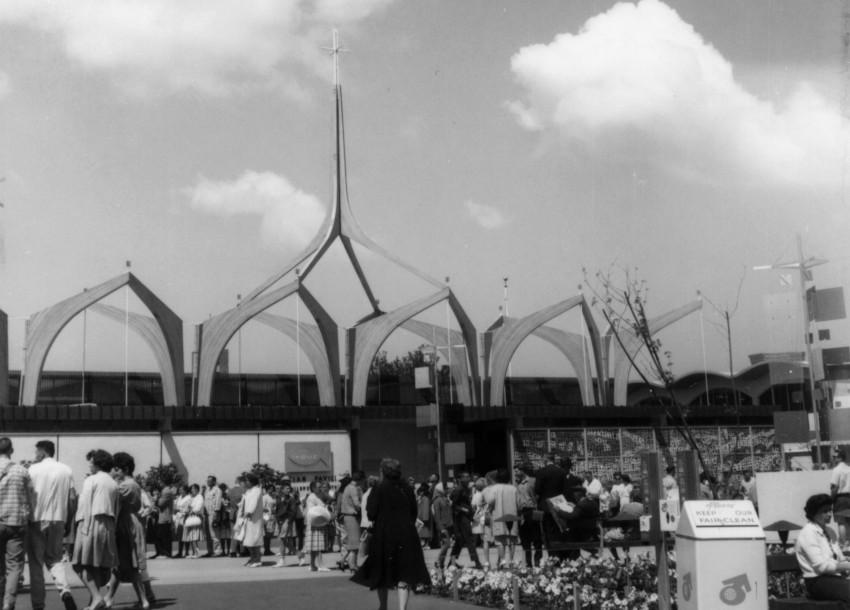 The wood beams and arches of the Christian Witness Pavilion.

Various photographs and materials from the FHS Archives document the use and promotion of wood at the Seattle World’s Fair. You can browse more than 50 historic photos via our Image Database, some of which are highlighted throughout this post. A selection of articles on this topic is below. 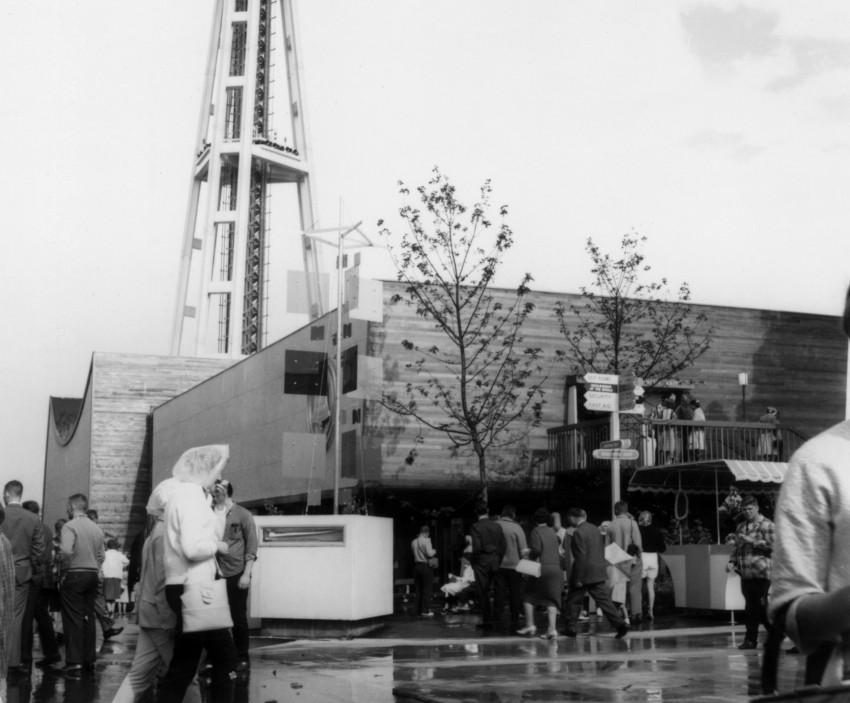 The all wood exterior of the Bell System Exhibit building, with Space Needle in background. 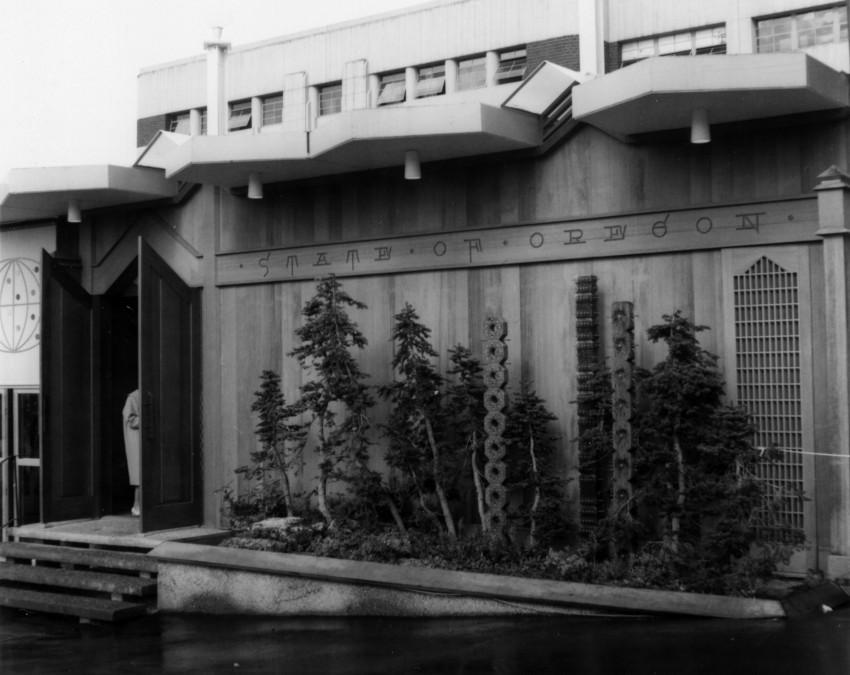 Exterior view of the State of Oregon pavilion. 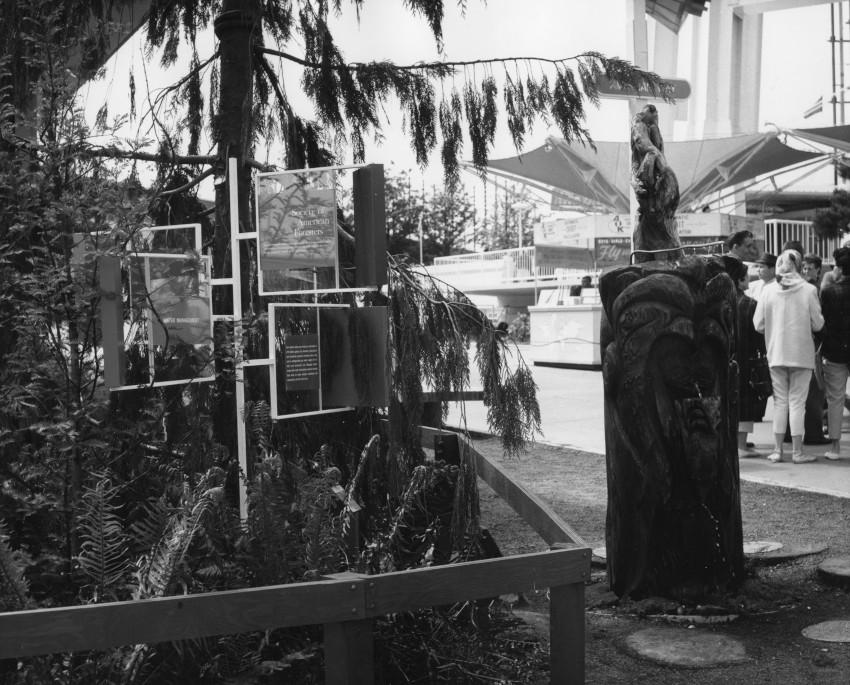 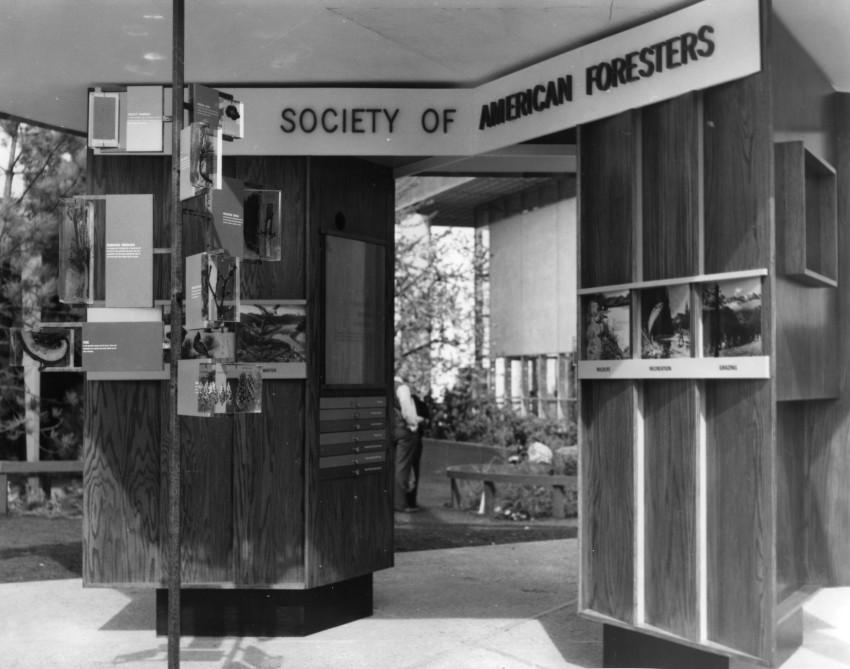 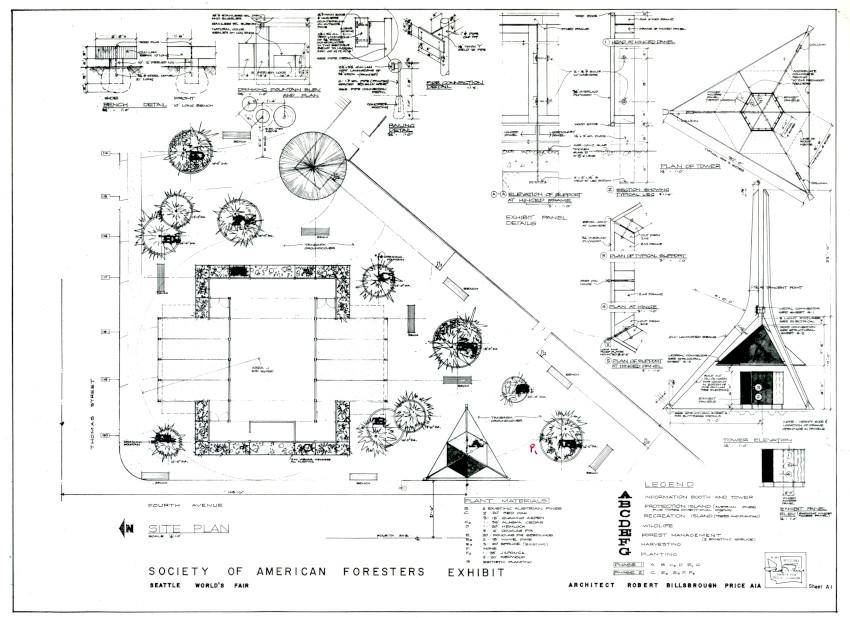 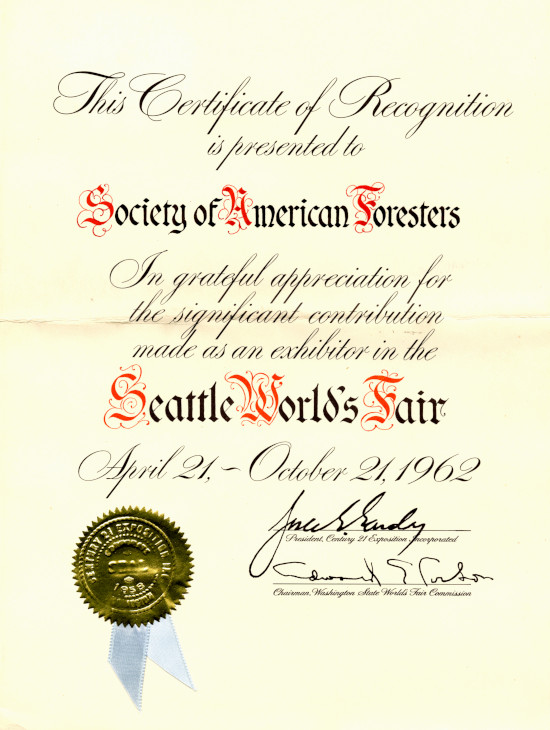