During World War I, two U.S. Army regiments of forestry engineers worked in France to provide the Allied forces with the large amount of timber necessary for the war effort. Those making up these regiments came from forest ranger, logging, and sawmill jobs throughout the U.S., and served their country in France by providing work crucial to the eventual success of the Allied forces in Europe.

We’ve gathered primary source materials and published articles from various collections to provide information on the 10th and 20th Engineers during World War I. Included are an overview of their mobilization and work, a special 1919 issue of American Forestry magazine dedicated to the forestry engineers, personal accounts and experiences of members of the forestry regiments, information on recruitment efforts, deployment and service, and the sinking of the Tuscania, as well as featured photographs and images, a timeline of events, and suggestions for further research.

When the United States entered the first World War in April 1917, one of the first requests from their French and British Allies was for regiments of trained lumbermen. Timber was in constant demand for almost every phase of military operations in Europe, and limitations on trans-Atlantic shipping space meant that nearly the entire timber supply had to come from French forests. In order to maintain this supply, the forests would have to be carefully managed. The Allies agreed that American forestry units would work in France’s forests, producing materials in accordance with the principles of French forestry. The U.S. Army, with assistance from the U.S. Forest Service, state foresters, and lumber trade associations, immediately began recruiting experienced foresters, loggers, and sawmill workers for these new regiments.

The new recruits were first formed into the 10th Engineers (Forestry) under Col. James A. Woodruff. The regiment trained at American University in Washington, D.C., during July and August of 1917 before being sent to France, arriving in early October. Increases in wood requirements by the Allied forces necessitated the immediate creation of a second regiment, the 20th Engineers (Forestry), under the command of Col. W.A. Mitchell.

The 10th and 20th Engineers operated in various areas of France’s forestlands, managing forest growth, felling and logging timber, and operating sawmills. The men of these regiments produced wood that was then transported to American forces throughout Europe. The wood was used for building roads and railroads, constructing barracks, erecting telephone poles, supporting trenches, and various other building and construction projects. The already highly experienced men making up the regiments were able to streamline the lumber manufacturing process almost immediately. The troops of the 10th and 20th Engineers, along with several other engineering regiments and battalions, were eventually combined in October of 1918 into the 20th Engineers (Forestry), the largest regiment in the entire American Army. The 20th would be referred to as “not a regiment, except in name, but a great manufacturing establishment.”

The forestry units would greatly exceed all expectations of production. The mills they operated produced over three times their rated capacity. During the month of October 1918 alone, over 53 million board feet was cut by the forestry troops. This high level of work efficiency would continue beyond the end of the war, as production continued until May of 1919 in order to fill previously arranged purchase contracts. Overall, the forestry regiments were considered an immense success, and their work was crucial to the victory of Allied military operations in Europe.

Several months after the end of the war, American Forestry, the magazine of the American Forestry Association, dedicated a special commemorative issue to the work done by the 10th and 20th Engineers. Included in the June 1919 retrospective were articles written by some of the commanding officers of the forest engineer regiments, as well as a large number of photographs documenting the work and experiences of the forestry troops.

The men of the 10th and 20th Forestry Engineers were exposed to a range of unique experiences in Europe. The following links provide full-text pdf versions of sources documenting some of their personal stories. 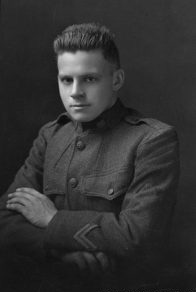 An article from the February 1918 issue of American Forestry, “War Materials from French Forests,” features a large section taken from excerpts of letters sent home by 10th and 20th Regiment soldiers.

An excellent account of the experiences of the men of Company E, 10th Engineers, is provided by Company “E” and 1st Detachment 10th Engineers in France, by E. L. Lindsey and F. S. McNally. Includes numerous photos and full roster listings.

The first-hand account of Private First Class George S. Kephart, who left the Cornell School of Forestry early to join the military, is documented in this article. Kephart became a member of Company E, of the 10th Engineers (later being moved into 36th Co. 20th Engineers) and left for Europe at the end of September 1917 (from Journal of Forest History, October 1978). 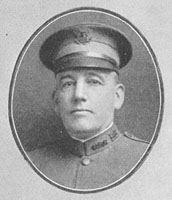 Evan W. Kelley, a captain and later a major with the 10th Engineers in France, recounts his experiences in Europe in this excerpt from an oral history interview (from Evan W. Kelley: The Making of a Regional Forester. Edited by Amelia R. Fry. Berkeley, Calif.: University of California, Bancroft Library, Regional Oral History Office, 1974).

Detailed accounts of experiences in France from February through June of 1918 of Major George H. Kelly, 4th Battalion, 20th Engineers, are revealed in excerpts from his letters home (from The Timberman, August 1918). 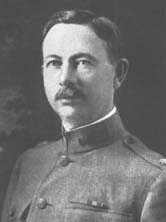 “With the Forest Regiments in the Field,” an article from the May 1918 issue of American Forestry containing excerpts of letters written by 10th and 20th Engineers.

Messages from Abroad, a pamphlet published by the U.S. Forest Service, contains selected first-hand accounts documenting the work done by the Forestry Engineers.

An excerpt from the diary of Major Edward E. Hartwick, commanding officer of the 1st Battalion, 20th Engineers, as well as owner of Hartwick Lumber Company in Detroit, Michigan. Hartwick was stationed with his staff in Dax, France, and this entry from Christmas Day of 1917 reveals thoughts on his new surroundings, having arrived in France a month earlier (from A Biographical Sketch of Major Edward E. Hartwick by Gordon K. Miller, 1921). Hartwick would serve in France until his death from illness on March 31, 1918.

February 1918 recruitment advertisement from The Timberman.

The U.S. Army utilized the U.S. Forest Service, state forestry organizations, and lumber trade associations to help recruit experienced foresters, loggers, and sawmill workers for the 10th and 20th Engineer regiments. The following sources document some of these recruitment efforts.

The following sources document the mobilization of the 10th and 20th Engineers, and examine the work done in France by the Forestry Regiments.

An excerpt from the autobiography of Maj. Theodore S. Woolsey, who worked with timber acquisition for the 10th Engineers. Woolsey discusses his enlistment process and initial thoughts on timber purchasing in France (from Riding the Chuck Line: A Forester in Peace and War by Theodore S. Woolsey, 1930).
The neeed for an American forestry regiment, as well as the planned forestry work to be done in France, is examined in “Foresters to the Front” (from American Forestry, August 1917).

The officers of the 10th Engineers are listed and early recruitment efforts are detailed in “Forest Regiment Off For France” (from American Forestry, July 1917).

The final days of the 10th Engineers at training camp in Washington, D.C., and preparations for deployment to Europe are discussed in “The First Forest Regiment Goes Across” (from American Forestry, September 1917).

The Carpathians: Tenth Engineers (Forestry) A.E.F. 1917-1919, Roster and Historical Sketch is a publication providing a brief history of the work of the 10th Engineers along with a complete roster listing of 10th Engineers officers and enlisted men, 1st and 2nd Battalions, Companies A–F.

The crucial importance of wood to the Allied forces during WWI is examined in “All Wooden on the Western Front” by Frank N. Schubert (from Journal of Forest History, October 1978).

Example of the manuals issued to forestry engineers during the war. [PDF]

Example of the manuals issued to forestry engineers during the war. [PDF]

An article discussing the organization and forestry methods used by the 10th and 20th Engineers, as reported by Lt. Col. Henry S. Graves (from The Timberman, April 1918).

The mobilization of the 20th Engineers, along with a listing of officers for the 1st and 2nd Battalions is covered in “Forester’s in World’s Largest Regiment” (from American Forestry, November 1917).

Information on organizing the battalions of the 20th Engineers, along with a listing of officers for the 1st–4th Battalions, is included in “Foresters and Woodsmen in War Work” (from American Forestry, December 1917).

Detailed accounts of the work done by the 10th and 20th Engineers in France, written by Lt. R. H. Faulkner and Capt. Francis Kiefer (from American Forestry, July 1918).

An overview of the mobilization and work done by the 10th and 20th Engineers, “The Biggest Regiment in the Army,” by David A. Clary (from Journal of Forest History, October 1978).

A detailed map showing the location of the sinking of the Tuscania (from Twentieth Engineers France 1917-1918-1919).

The Sinking of the Tuscania

On February 5, 1918 the Tuscania, a transport ship carrying over 2,000 American soldiers, including members of the 6th Battalion of the 20th Engineers, was torpedoed by a German U-Boat in the North Channel between Ireland and Scotland.

The Tuscania was transporting the 6th Battalion from the U.S. to France when struck by a torpedo from a German submarine south of the island of Islay, Scotland. Hit just before 6 pm, by 7 pm all of the lifeboats were launched, with well over 1,000 soldiers still aboard. American destroyers escorting the ship assisted in removing the remaining troops until the ship completely sank at 10 pm that night. Nonetheless, 230 men aboard the ship lost their lives in the attack, including 95 men from the 6th Battalion.

Names of men from Company F of the 6th Battalion who lost their lives in the Tuscania attack were listed in The Timberman (from The Timberman, February, 1918).

A group photo of Company E, 6th Battalion survivors from Mississippi and Louisiana was sent to the Southern Pine Association (from Southern Lumberman, April 6, 1918).

Among the Tuscania survivors were employees of the Long-Bell Lumber Company in Kansas City, Missouri, shown here in a group photo (from American Forestry, August, 1918).

The attack and its aftermath are discussed in “Torpedoed Foresters Anxious for Revenge,” a brief article from Southern Lumberman, March 23, 1918.

Included in Twentieth Engineers France 1917-1918-1919 is a complete casualty list of the 20th Engineers from all of WWI, the vast majority having died in the Tuscania attack.

The video clip below, from the FHS YouTube Channel, is a DVD extra from The Greatest Good, a documentary on the history of the U.S. Forest Service. The clip provides a brief look at the important role played by the 10th and 20th Engineers and the Forest Products Laboratory during WWI.

Don Bragg, Project Leader for Southern Pine Ecology and Management, narrates a brief history of the 20th Engineers for the Arkansas WWI Centennial in the following video clip:

The following suggested resources can be used for further research on topics related to the 10th and 20th Engineers during World War I.

A helpful bibliography of sources on the forestry units of WWI was compiled by David Clary for the October 1978 issue of the Journal of Forest History.

The first history of the 20th was published not long after the war ended. Twentieth Engineers, France, 1917-1918-1919, edited by Perez Simmons and Alfred H. Davies (Twentieth Engineers Publishing Association, 1920), offers a complete overview of the work done by the Forestry Engineers, along with accounts of each individual battalion. A full-text online version of this book is available through the Internet Archive.

Another good online resource is Bruce Porter’s 20th Engineers history website. The World War I section of the site provides a great collection of information, including numerous photographs.

©2012 Please do not publish or further disseminate any of the materials found on this site without the permission of the Forest History Society.