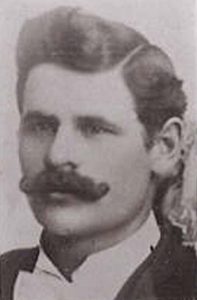 In December 2005, Richa Wilson US Forest Service Region 4, Architectural Historian, conducted a Passport in Time (PIT) project cataloging historical documents and artifacts in the Region 4 History Collection, which is stored at Weber State University. The transcriber, Gail Carbiener, was a member of the PIT team.

Among the artifacts found were 43 complete Forest Service diaries along with approximately 200 loose diary pages written by Martin L. McAllister between 1907 and 1919. By reading the contents, we quickly became interested in the story, as details of daily life of an early forest ranger became clear.

As a Passport-in-Time volunteer with over 2500 hours, I must admit that this transcription project has been one of the most rewarding. Using white gloves to protect the diaries and loose pages, I began on October 3, 2006 and finished in March 2007 with over 400 hours devoted to the project.

From the diaries and the Washington County newspaper of the time, I knew that the St. George office of the Dixie National Forest moved to Cedar City just prior to McAllister’s last days. I’m sure he did not want to move from St. George, Utah.

Martin was 36 years old in 1907, he took the Oath of Office and made out a Personal Statement Sheet on May 9, 1907. He received his Assistant Forest Ranger appointment on November 4, 1907. I always felt that the other rangers looked up to Martin, asking for his opinion and assistance. The diaries rarely provide any “personal” information. There is no indication, in the diary, that Martin attended his father’s funeral in St. George or took time to celebrate birthdays or anniversaries. He did record that he met his mother once on her way to Salt Lake City as she was traveling by buggy to Modena, the rail stop. Martin also recorded that he took several days of annual leave to attend his wife’s illness and recorded that he was operated upon at one time.

Martin recorded in his diary that he owned and rented the building that housed the Forest Service office in St. George. He traveled the forest often, always by horseback, buggy, or spring wagon.

He rode the range at all times of the year and in all weather, camping out most of the time. He met with cattle grazers, sheep men, loggers and miners, trappers and hunters, and homesteaders. Martin worked unbelievably hard building fences, cabins, roads, and trails. He was sick several times over the years, working with very few days off for sick leave. Martin collected seeds and plants that are likely in the Regional Herbarium, which was recently transferred to Brigham Young University.

Although never mentioned in the diaries, Martin had a very strong faith and it was never far from the surface of his activities. Martin’s participation in The Church of Jesus Christ of Latter-Day Saints (LDS) events was recorded in the Washington County newspaper. He was active in community affairs, serving on many committees over the years.

I found the following details on the internet and during my visit to the LDS Family History Center in Ogden:

Martin’s second wife was Mae Mortensen, whom he married on December 31, 1922. No children were born of this marriage.

In my opinion, the diaries are a wealth of research information on the life of a forest ranger in the early years of the Forest Service, especially in southern Utah. Martin wrote in detail his activities every day. He recorded what he did, where he was, whom he met and worked with, the weather, methods of transportation, etc. Martin designed and constructed ranger stations and drift fences, and repaired wagons and tools.

Martin spent considerable time in “The Meadows” camping and talking with the first homesteaders. He was asked to survey and take pictures of the wash in the Mountain Meadows. The 150th anniversary of the Mountain Meadows Massacre was marked in 2007.

Martin spent time in Arizona, all the way to the rim of the Grand Canyon, when the land was part of the Dixie Forest Reserve. He performed lots of survey work and recorded data made by early General Land Office (GLO) surveyors.

The Dixie National Forest, with headquarters in Cedar City, Utah, occupies almost two million acres and stretches for about 170 miles across southern Utah. The largest National Forest in Utah, it straddles the divide between the Great Basin and the Colorado River.

Elevations vary from 2,800 feet near St. George, Utah to 11,322 feet at Blue Bell Knoll on Boulder Mountain. The southern rim of the Great Basin, near the Colorado River, provides spectacular scenery. Colorado River canyons are made up of many-colored cliffs and steep-walled gorges.

The Forest is divided into four geographic areas. High altitude forests in gently rolling hills characterize the Markagunt, Pansaugunt, and Aquarius Plateaus. Boulder Mountain, one of the largest high-elevation plateaus in the United States, is dotted with hundreds of small lakes 10,000 to 11,000 feet above sea level.

The Forest has many climatic extremes. Precipitation ranges from 10 inches in the lower elevations to more than 40 inches per year near Brian Head Peak. At the higher elevations, most of the annual precipitation falls as snow. Thunderstorms are common during July and August and produce heavy rains. In some areas, August is the wettest month of the year.

The vegetation of the Forest grades from sparse, desert-type plants at the lower elevations to stand of low-growing pinyon pine and juniper dominating the mid-elevations. At the higher elevations, aspen and conifers such as pine, spruce, and fir predominate.

In 1851 when Brigham Young sent the Mormon Settlers to the St George area it was warm and lots of the people he sent here were from the deep south and they started calling it Utah's "Dixie". Both because of the heat and all the southerners down here to grow cotton for the Church. In 1903 when the National Forest was set up in the SW Utah area, which at that time took in all of Pine Valley Mountains, Mt Charleston and the Sheep Creek range (Near Las Vegas, NV) and the Mt Logan, Mt Dellenbaugh and Mt Trumball areas of the Arizona Strip. Congress gave it the name Dixie National Forest. Partly because the headquarters were in St. George right in the middle of "Dixie". In the late 1930's when the Powell, Sevier, Aquarius and Dixie National Forests were all consolidated into one National Forest. Congress once again gave the name Dixie National Forest to the newly consolidated Forests. I guess there was some people especially those in the Panquitch and Escalante areas that were upset by that but as it take an act of Congress to make a name chance to a National Forest as well as a boundary change that is the name we wound up with. It was the distinguishing feature of the area being Utah's "Dixie"