The New Swimsuit Issue Is Out From … Forest Echoes? 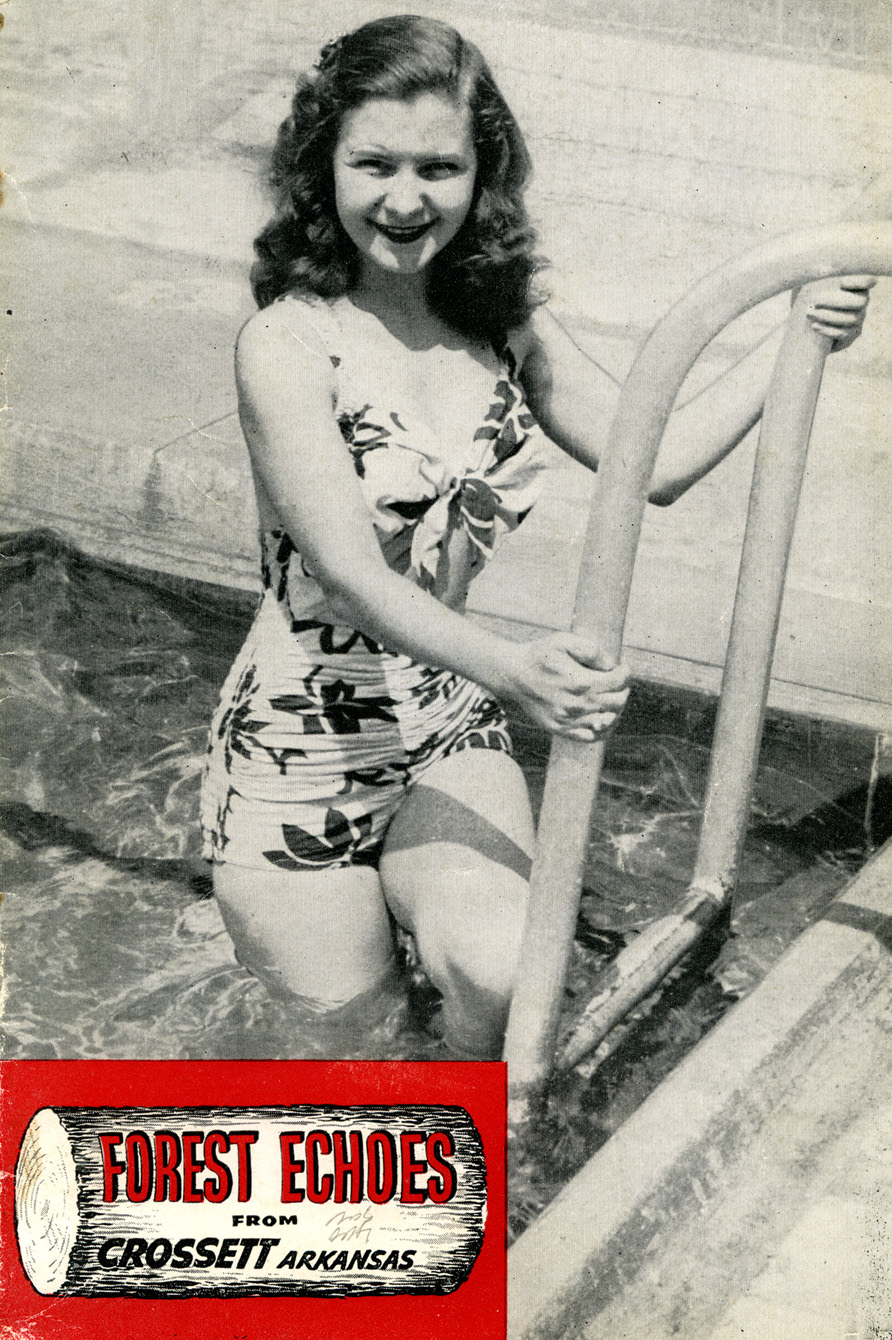 That’s Miss Sally Johnson. And it’s the new swimsuit issue of Forest Echoes—well, “new” on the forest history temporal scale. It’s from 1947. And to be honest, it’s not really their swimsuit issue. So what’s going on here?

Forest Echoes was the monthly magazine published by the Crossett Lumber Company of Crossett, Arkansas, from 1939 until the company merged with the Georgia-Pacific Company in 1962. The company incorporated in 1899 and built the town of Crossett, which was incorporated four years later. The history of the company and the town are intertwined. Both are also closely linked to the Crossett Experimental Forest, which has a long relationship with the Yale Forestry School, often the source of some of the magazine’s humor (see cartoon below). We’ll have an article on the history of the experimental forest in the next issue of Forest History Today.

But back to Forest Echoes. What began as a mimeographed safety bulletin distributed by the company’s personnel division to some 1,500 workers in September 1939 quickly evolved into a slick little monthly magazine that contained personnel news, safety information, announcements of new technology and equipment, school events, and local events and programs like the Miss Crossett beauty contest, which Sally Johnson won in 1947. 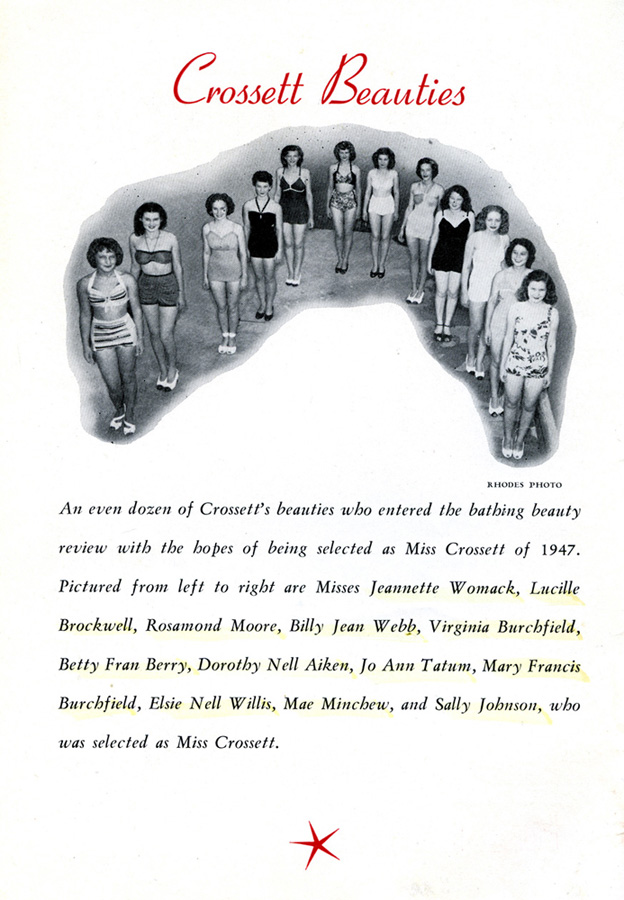 From the July 1947 issue of Forest Echoes.

Sometimes they printed general education information on income taxes and social security, or on more mundane things like personal hygiene. This same issue included an article on the necessity of taking care of your feet and wearing good shoes because “a little advance foot care may save you many hours of pain and lost income.” Short works of fiction were also published. They had to be short: the magazine was 6″x9″ and on average just 16 pages per issue. The magazine also provided news about the African-American employees events in their community. Overall, Forest Echoes provides an excellent resource on the town’s history.

The magazine is interesting from a historical perspective as much for what it says as for what it doesn’t say. Forest Echoes reflected what was going on in the national culture at the time in some ways, such as the beauty contests and community picnics and baseball games, while being selective about the news from the outside world. It was strictly about life in Crossett and Crossett’s view of the world, or at least that of the editors. During World War II residents were kept apprised of what the local boys were doing to win the war, and after the war an occasional article would appear on Crossett men who were in the National Guard. But the fight to desegregate schools in Little Rock in the 1950s is never mentioned and the magazine ceased operating long before the town schools integrated in 1968. It would have been fascinating to see how and if the magazine reported on the talks between the white and black communities about integration and the subsequent end of segregation.

Another way the magazine sheds light on this era is through the humor published within. From the very first issue, lots of jokes were included. Initially they were scattered throughout the newsletter but eventually they were consolidated into a column called “Wind in the Pines.” The jokes are on par with what you’d have seen in Reader’s Digest then and even now—jokes about the work place, everyday life, and relations between the sexes. Often they depict a hobo or a working stiff putting one over on or giving comeuppance to the rich and powerful. Not long after the magazine started, a cartoon character named Abel Woodman appeared on the inside back cover. He typically gave a message about forest conservation or job safety but sometimes it was just straight humor. You can look forward to a “Forgotten Characters” post about Abel sometime soon. For now, here’s a taste.

The presence of Yale Forestry School students every summer in Crossett gave the artist of Abel Woodman plenty of fodder over the years.

At the outset I joked that the issue shown here was new. Well, it is new to us. It is through the generosity of David Anderson at the Crossett Public Library that we just received that issue. In fact, he sent us more than a hundred issues of Forest Echoes, which will go a long way towards filling out our collection of Forest Echoes in the library. Along with those, he sent copies of two histories of the town. So for researchers interested in Crossett Lumber and the town of Crossett who can’t get to Arkansas, come on down. As Sally Johnson might say, the water’s fine. 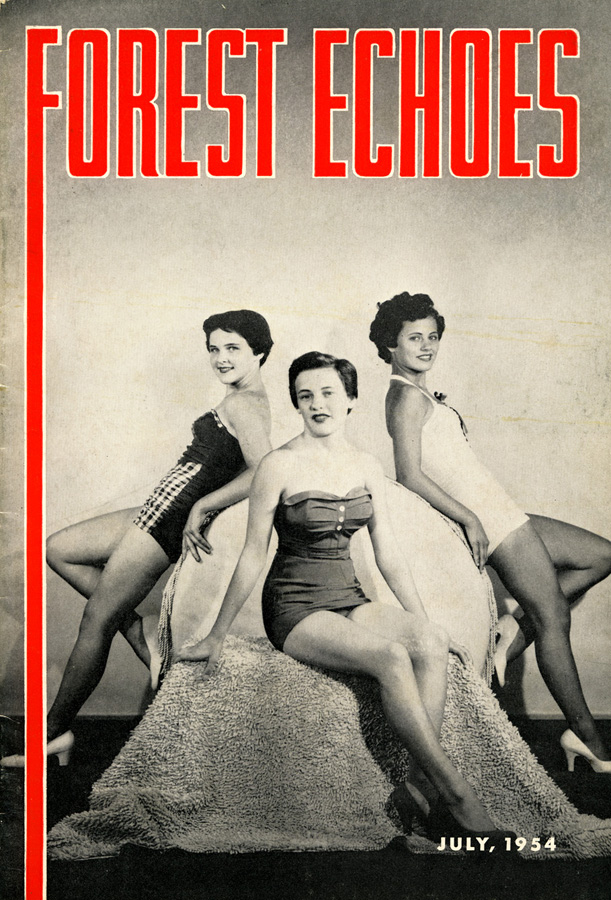