The Wood Prince of Bel Air: Building the ‘Strangers When We Meet’ House

In the summer of 1960, Columbia Pictures released the film Strangers When We Meet. Adapted by Evan Hunter from his novel by the same name, the film’s plot centers around Larry Coe, an architect (played by Kirk Douglas) who is building a home for a Hollywood writer (played by Ernie Kovacs). While designing and building the magnificent home, Coe becomes involved in an extramarital affair with one of his neighbors, portrayed by Kim Novak.

Joining these three established Hollywood stars were the reliable Barbara Rush and rising star Walter Matthau. But from a forest history perspective, the real star of the film was the house Kirk Douglas’s character was building. For maybe the first time in movie-making history, instead of using a temporary set, shooting on a soundstage, or filming at an existing location, the house at the center of the film’s plot was designed and constructed simultaneously as the movie was filmed. Strangers When We Meet in part documents the building of a real, permanent structure as it happened. 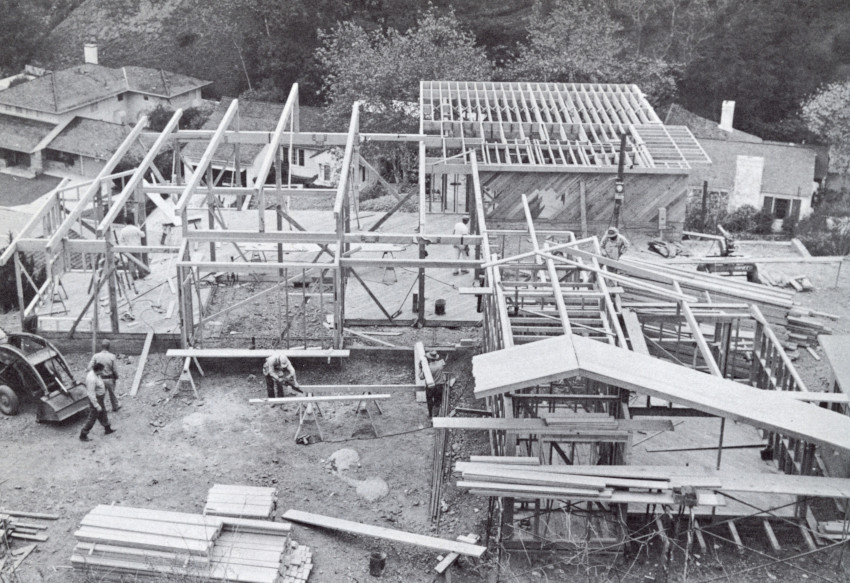 The house at the center of the film, while under construction.

Doing this presented a unique challenge. The filming schedule had to be closely coordinated with the house’s construction schedule because its construction was central to the plot. One of the big players behind the scenes helping to pull this feat off was the Weyerhaeuser Company. It was the main supplier for all the wood products being used in the home’s construction—and this particular home would require a lot of wood. In addition to wood for framing, the house design called for cathedral ceilings to showcase exposed beams and ceiling decking, and to feature wood paneling and lattice work throughout. 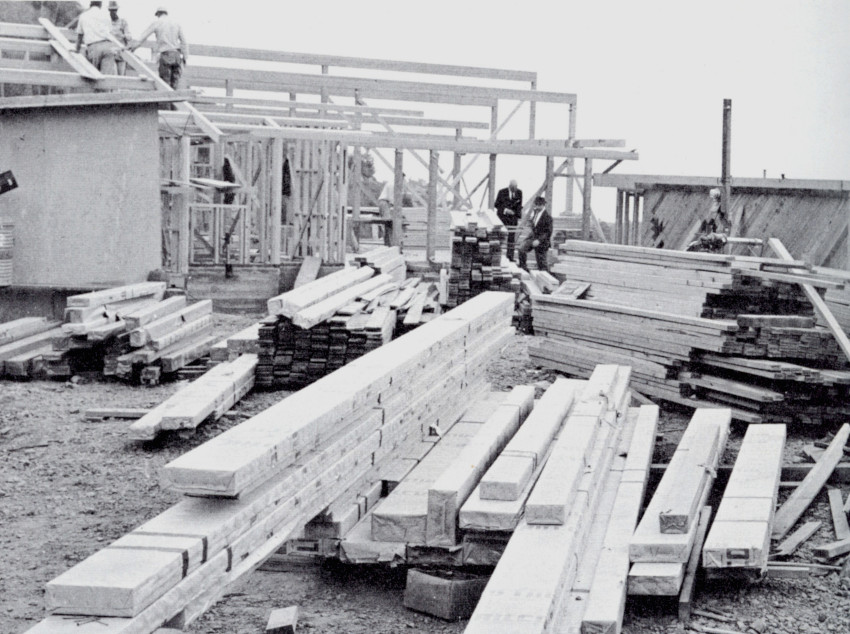 Weyerhaeuser lumber products stacked up at the building site.

This was such a big deal for Weyerhaeuser that they simultaneously produced their own short film, a behind-the-scenes look at the making of Strangers When We Meet and the building of the house. A New Star in Hollywood focused on the work of the film’s art director Ross Bellah, who, along with architect Carl Anderson, designed the house from scratch before filming began. These plans were then turned over to the firm of Victor Gruen Associates for engineering and to builder Kenneth B. Wamsley for the actual construction. (View the film’s title credits card mentioning the designers and builder.)

It was art director Bellah who recommended a real home be built in the Los Angeles area for the film. And what he and Anderson designed was no ordinary home. They created a visually striking 3,800-square-foot house built almost entirely from wood. The home’s distinctive look was only magnified by the building site selected—on a knoll partway up a canyon above Bel Air, with spectacular views all the way to the Pacific Ocean. 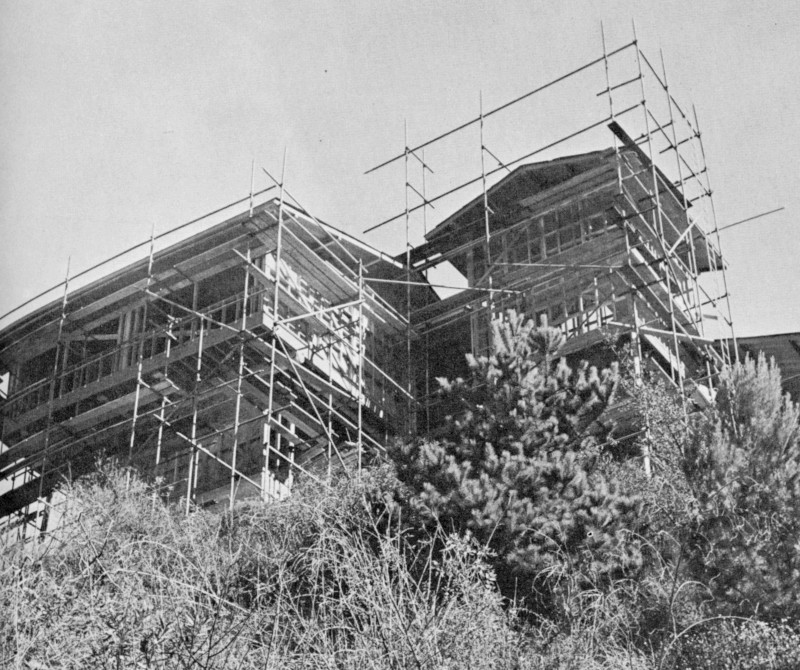 The movie home perches halfway up a 130-foot steep hillside lot with a spectacular view down a canyon to the Pacific Ocean.

The Weyerhaeuser short film documents this entire process, from empty lot to finished home. A New Star in Hollywood shows Bellah visiting a Weyerhaeuser distribution yard in Los Angeles to choose materials, delivery of the wood from the lumber yard to the site, and the ongoing construction work. The film ends with Bellah returning to tour the completed, furnished home after filming of Strangers When We Meet had wrapped. 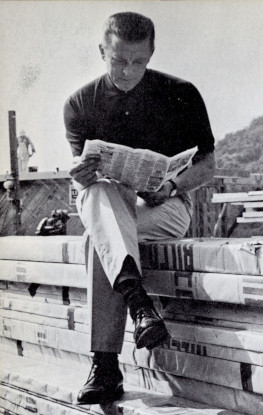 Kirk Douglas takes a break from shooting, resting on a stack of Weyerhaeuser Rilco beams.

The unique character of the home is fully revealed in this brief tour captured by Weyerhaeuser’s cameras. The last portion of A New Star in Hollywood brings the viewer through the outdoor areas, around the pool and across the decks, concluding with a detailed tour of the home’s furnished interior, including the “eagle’s nest,” a two-level study with a balcony deck. It also provides a close-up look at the unique way wood was used throughout the house. Various Weyerhaeuser products are highlighted, such as kiln-dried 4-Square lumber, plywood, and Rilco laminated beams, as well as the red cedar paneling, Douglas fir posts, western red cedar exterior siding, roof decking, and much more. The house was truly a showcase of Weyerhaeuser products and for the adaptability of wood to any style of architecture or type of home. A New Star in Hollywood concludes with the narrator stating, “This home exudes the feeling of warmth and distinction given it by man’s oldest yet most modern building material—wood.” 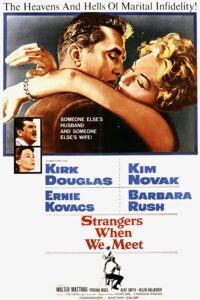 The company also promoted the Strangers When We Meet connection in its employee publication Weyerhaeuser News. The March 1960 issue featured a striking cover image of Kim Novak posing in front of the under-construction house. The article included a three-page spread of photos documenting the building process. This was followed up by a feature in the July issue, titled “As promised, an inside peak at Fabulous Movie Home starring Weyerhaeuser 4-Square Products.”

The July issue came out just as Strangers When We Meet was hitting theaters nationwide. The film wasn’t well-reviewed (Variety called the film “easy on the eyes but hard on the intellect”), but it was still a financial success for the studio, earning nearly $3.5 million at the box office, or about $1 million in profit. Weyerhaeuser capitalized on the attention. The company made its promotional film available for showing to Weyerhaeuser dealers, builders, architects, and service organizations, and it showed architectural models of the house at construction trade fairs throughout the country. 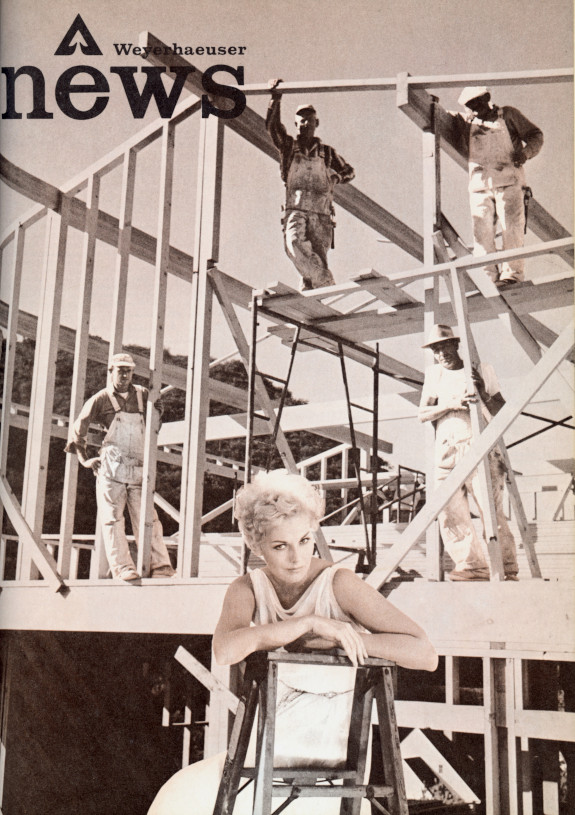 Kim Novak on the cover of the March 1960 issue of Weyerhaeuser News.

The house also proved to be a great financial investment. The completed home in Bel Air was valued at $250,000 in 1960, when the film was released. Hollywood legend has it that the house was originally going to be given by the studio as a wedding gift to Novak and the film’s director Richard Quine, who were engaged at the time. Their relationship soon fell apart, and the home was instead sold to someone else.

Adjusted for inflation, that quarter of a million dollars would be roughly $2.2 million in today’s money. That would still be a steal; the home sold for $4.1 million in 2013, and it’s estimated to be worth over $9 million today.

The home has been dramatically changed over the years. As you can see in this 2013 tour of the home made at the time of its last sale, the wood is no longer featured as Bellah originally intended. Lucky for us, his original vision, with all the wood products showcased within the home, is preserved here in the FHS archives. Copies of A New Star in Hollywood can be found in the Weyerhaeuser Records, or you can watch it below. Today, the film may be largely forgotten. The house, however, remains its biggest star.