The Use of the National Forest Reserves' "1905 Use Book" 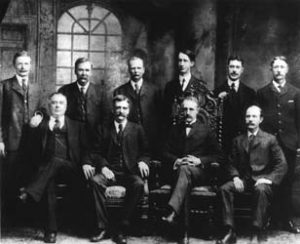 A presidential proclamation in 1891, authorized the creation of the Forest Reserves in the United States. The General Land Office administered these lands until 1905, when the forest reserves were transferred to the newly created Forest Service. Gifford Pinchot, chief forester, and the "Use Book Committee" revised earlier regulations and instructions needed to guide the public and the Forest Officers in the use of the National Forest Reserves. Published in 1905 as The Use of the National Forest Reserves, it came to be known as the Use Book.  Annual editions of the Use Book were released. From its beginnings as a pocket-sized, 142-page document, the Forest Service manual has grown to encompass multiple volumes, in both print and electronic formats.

In 1907, the National Forest Reserves were renamed National Forests. While the 1907 edition of the Use Book is the first which contains the name change and includes some other significant wording related to monetary reimbursement for roads and schools, it is more widely available than the 1905 version.

We chose to put the 1905 version of the Use Book online for a couple of reasons:

Some notes about the online version of the Use Book:

The facsimile version of the 1905 Use Book (link below) reflects the general layout of the book (relative font sizes, order, etc.), but our main concern was to make the document accessible and useful, as well as easy to navigate.

Page numbers are at the top of each page in italics (e.g., (p. 9)). Most are not at the exact same page break as in the book, but at the beginning of the nearest paragraph, where possible.