On the Waterfront: Pulp Company Photos Document Bellingham’s Past

Small crowds gathered around the Bellingham, Washington, waterfront on a Tuesday afternoon this past February to watch a 93-foot red brick building crash to the ground. The planned demolition of the former bleach plant building was just the latest chapter in the ongoing transformation of the city’s waterfront landscape. Once the site of a sprawling, state-of-the-art pulp and paper mill complex, the area is now part of a massive redevelopment and environmental cleanup effort. Numerous buildings have already been demolished and cleared away, leaving behind a digester building and two large tanks in the middle of an open expanse of concrete. The industrial skyline has given way to the first stages of a commercial waterfront district, signaling the beginning of a new era in Bellingham. The city’s industrial age, though, lives on in the Forest History Society Archives. 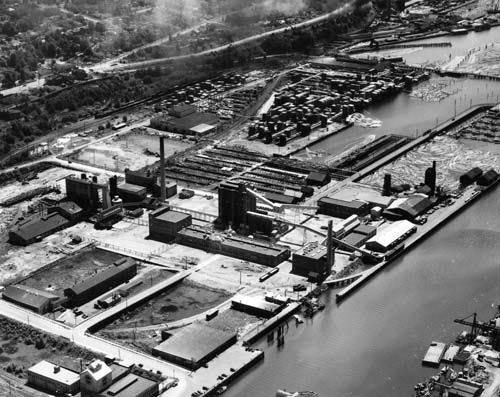 It wasn’t that long ago that the now-vacant site was a center of regional pulp production. With its proximity to both quality timber and the shipping channels of Puget Sound, Bellingham was a natural venue for the pulp and timber industry. Puget Sound Pulp & Timber would ultimately be the company to put the city on the map. Formed in 1929, the Puget Sound Pulp & Timber Company was a conglomerate of pulp, logging, lumber, and railroad companies in northwestern Washington. Bellingham soon became the center of the company’s operations, and the first unit of a new pulp mill was built on the city’s waterfront in 1938.

The mill continued to expand and modernize over the following decades. An alcohol plant (the first such facility in the U.S. to produce industrial alcohol from sulphite waste) was completed in 1945. A new hydraulic barking and log chipping plant was completed in 1946. In 1947 a paperboard mill was added, as well as a chemical laboratory to research uses for pulp byproducts. The bleaching plant was completed in 1951. Further expansion occurred in 1958 when Puget Sound Pulp & Timber acquired Pacific Coast Paper Mills, which operated on an adjacent waterfront property.

In the mid-20th century Puget Sound Pulp & Timber was one of the largest and most modern pulp-making facilities in the region, with operations running 24 hours a day, 7 days a week. On July 2, 1963, Puget Sound Pulp & Timber Company was acquired by the Georgia-Pacific Corporation. Georgia-Pacific operated the mill for the next four decades, eventually shutting down the pulp mill in March 2001 and the adjoining tissue paper and converting facilities in December 2007. Reconstruction plans for the abandoned waterfront complex began soon after. 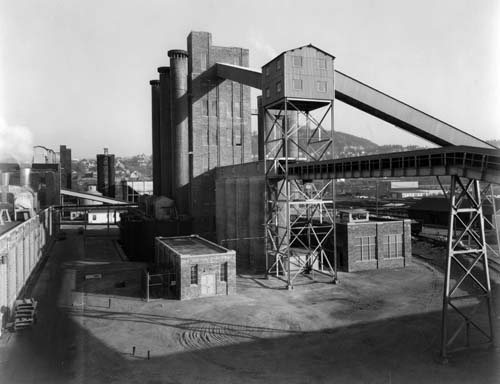 Materials documenting the industrial history of the Bellingham waterfront can be found in the FHS Archives. We recently digitized two rare promotional photo albums distributed by Puget Sound Pulp & Timber in the late 1930s and early 1940s. The first album includes photos of the exterior and interior of the pulp mill facilities in Bellingham. The second album features photos of the company’s logging operations in the Clear Lake, Washington, area. View the photos from both volumes in the new online gallery: Puget Sound Pulp and Timber Company Albums.

Also found in the FHS Archives is a copy of a 1953 promotional publication from the company: “Making Puget Pulp.” This large volume includes a visual documentation of the pulp manufacturing process. Photos follow logs as they are cleaned and barked, cut into chips, and then cooked in chemical solution until reduced to pulp. The pulp is then washed, screened, and bleached. The processed pulp is dried, cut into sheets for bailing, and then sold to mills where it is turned into various paper products. Take a visual tour of this pulp-making process via an excerpt from “Making Puget Pulp” (1953).

Continue below for a selection of Puget Sound Pulp & Timber Company advertisements from 1958-1963 (click images to enlarge). 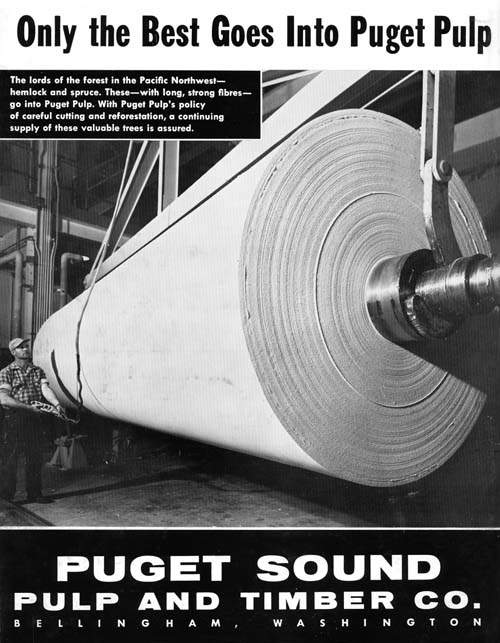 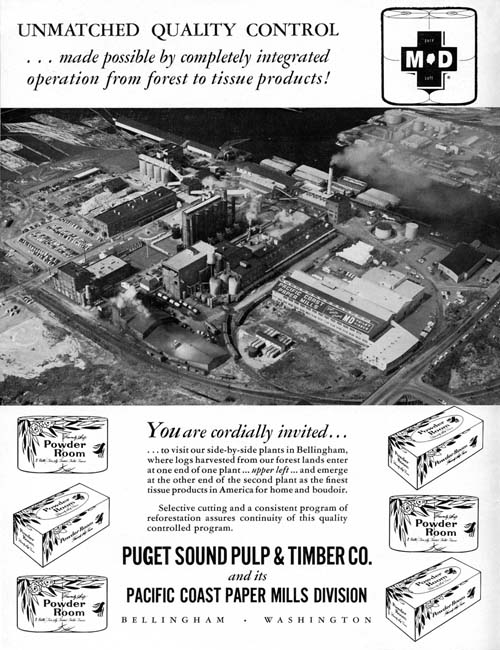 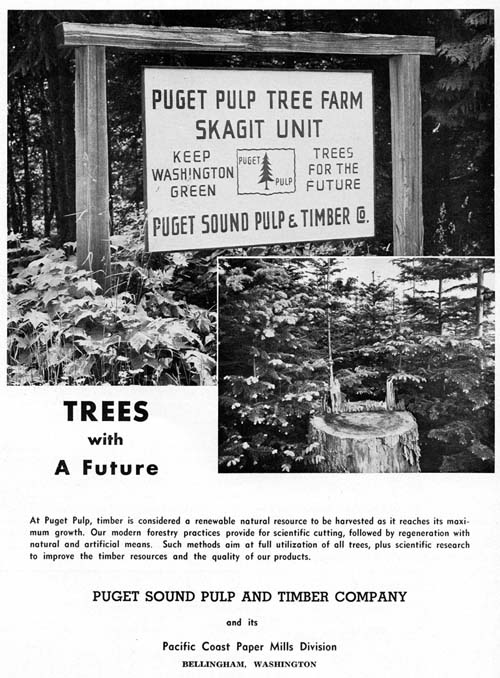 0 responses to “On the Waterfront: Pulp Company Photos Document Bellingham’s Past”