Forests in Fiction: Tom Gill Lived What He Wrote

Through one degree of separation, we can connect professional foresters with Hollywood glamour!  FHS holds the archival records and popular novels of the nexus: Tom Gill, a leader in international and American forestry and prolific author. 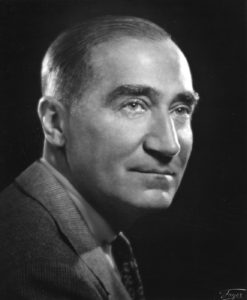 Thomas Harvey Gill (1891-1972) served as a forester with the U.S. Forest Service (1915-1925), the Charles Lathrop Pack Forestry Foundation (1926-1960), and the Food and Agriculture Organization. He was also a founder of the International Society of Tropical Foresters.

Gill authored many popular and academic works. His fiction centered on stories of adventure involving cowboys, forest rangers, and frontier characters. His 12 books of fiction included Guardians of the Desert, Death Rides the Mesa, North to Danger, The Gay Bandit of the Border, Firebrand, and No Place for Women.

Reading praise of Gill lends an aura of excitement and intrigue to the work of foresters and ranchers: 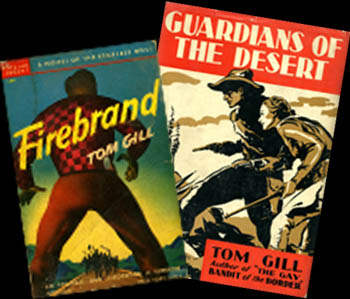 Tom Gill lives what he writes and writes what he lives -- stories of the deserts, jungles, mountains, and timberlands. Master of Forestry, war flyer, cattleman, trail blazer, and author, he has woven the glamour of his adventures into fiction of stirring action and color.

In a 1969 oral history, Gill described his real-life adventures as a World War I pilot, forest ranger, and world traveler. The following excerpt makes clear that the novelist Gill's source material was his own life.

In years of knocking about on several continents, I have been involved in floods, forest fires, snow-blindness, and army ants. As an innocent bystander, I weathered two untidy revolutions; I've camped in the shadow of Mayan temples and had my train riddled by a covey of lighthearted bandits. I've known the joy of slopping about in a sinking boat, finally to crawl up on shore in the low, pestilential delta of the Orinoco, faced with the cheery task of cutting my way through the jungle with a machete. 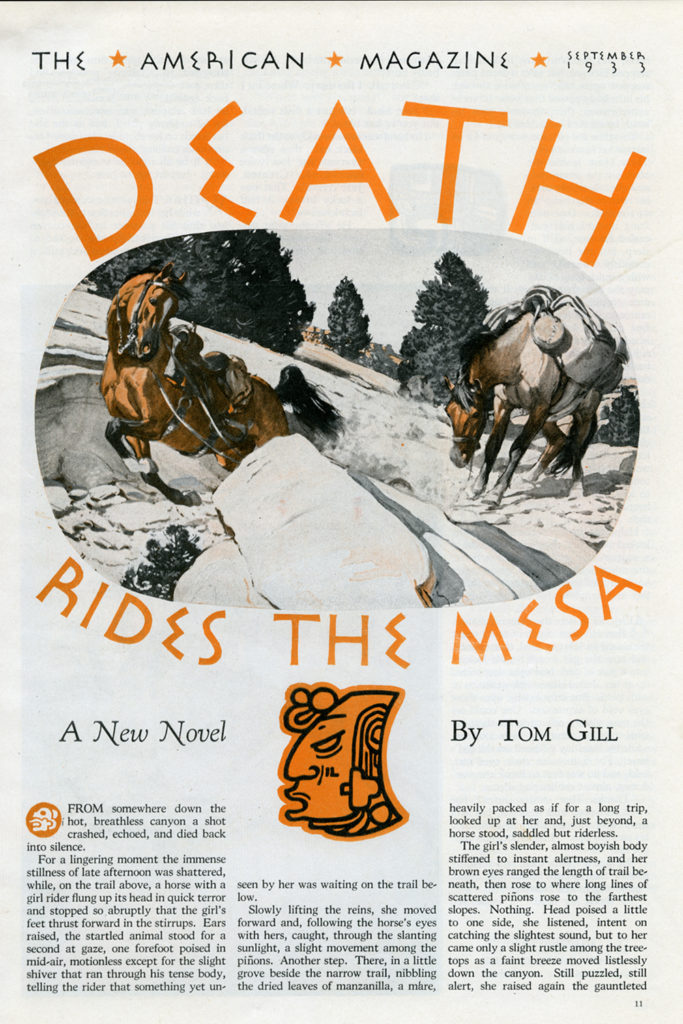 In addition to his life-inspired novels, Gill wrote numerous short stories and serials that were published in leading magazines of the day, such as Saturday Evening Post, American Magazine, Cosmopolitan, and Reader's Digest. In our Tom Gill Papers, FHS holds many serialized versions of his stories, including "Death Rides the Mesa" and the "The Gay Bandit of the Border," as well as his more scholarly and professional forestry-oriented files, of course.

Several of his works were made into movies, including The Gay Bandit.  In 1932, Fox Movietone released the picture The Gay Caballero, featuring leads George O'Brien and Victor McLaglen. In this tale, east coast football star Ted Radcliffe journeys westward to manage a cattle ranch, only to find his inheritance has been squandered by cattle baron Don Paco.  Ted aids masked avenger El Coyote but the situation is complicated by the fact that Ted is also falling love with the villain's daughter Adela. 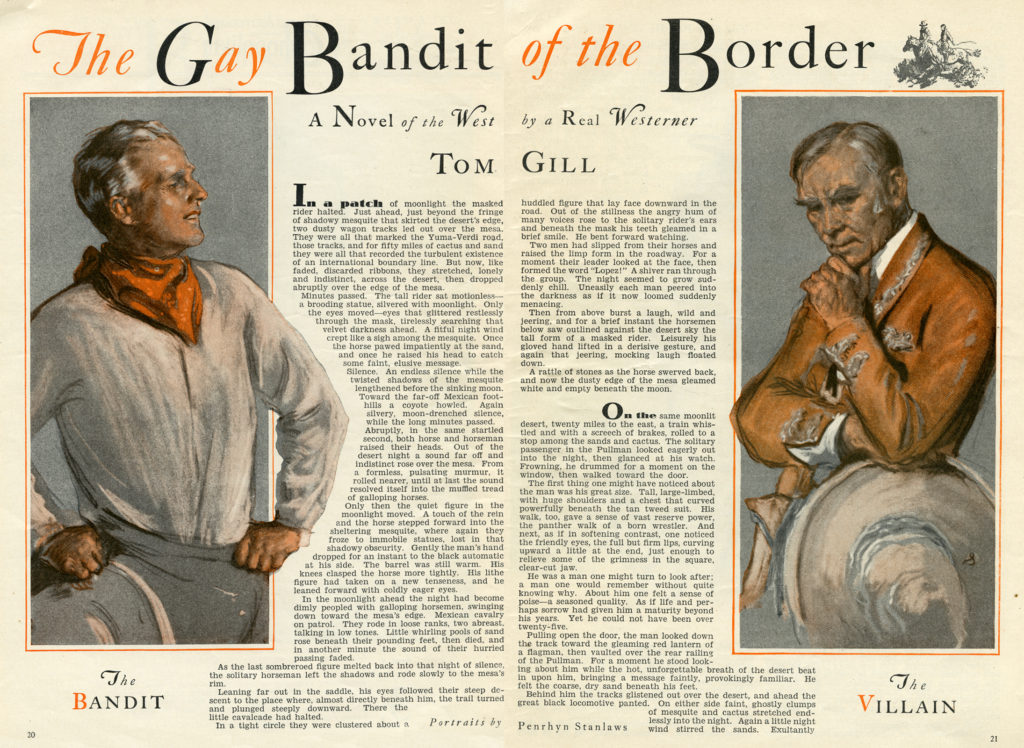 Tom Gill's novels have found a home in the Forest History Society's unique Forests in Fiction Collection.  Forests in Fiction consists of nearly 400 works of fiction published from the late 19th century through the present that range in genre from westerns to romance novels to mysteries. The settings and story lines focus on forested environments in the United States, and to a lesser extent in Canada. Subjects featured in the novels include lumbering, forest fires, the U.S. Forest Service, and conservation issues such as clearcutting and grazing.

These fictional resources are diverting -- and perhaps represent a dissertation (or three!) in the making. To share in the enjoyment, please feel free to search our electronic catalog of the Forests in Fiction Collection. 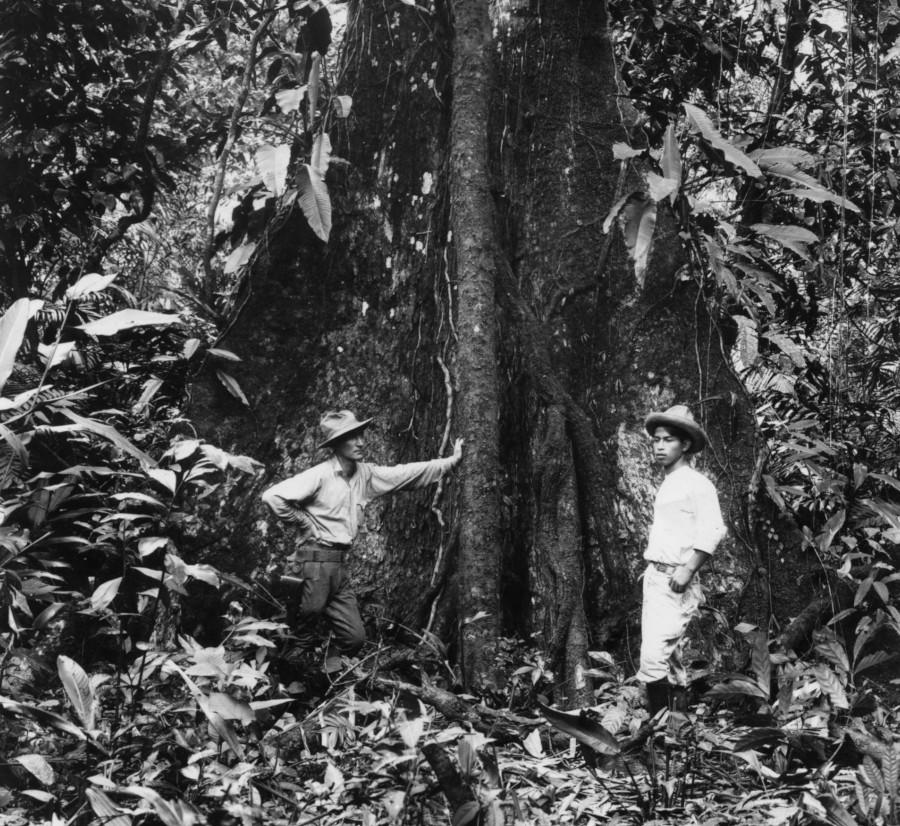 0 responses to “Forests in Fiction: Tom Gill Lived What He Wrote”