All saddles were "sawbucks"; the "diamond hitch" was used extensively.

Usually two men with from 15 to 20 head of horses worked together on long trips, such as from Coram to Big Prairie, which required about 2 weeks for a round trip. They didn't usually tail them together; they just herded them down the trail, one man on horseback up front and the other bringing up the rear. They camped in any spot with water and grass for the horses. Horses were turned loose in the hope the men could find them the next morning. These were long, hard days. The standard of living at some of these camps was not very high. It was not very pleasant when it rained or snowed. Packing continued this way until the 1920's, when the mules started to replace the horses and the Decker pack-saddles replaced the sawbucks for general use in the Forest Service. The diamond hitch went out with the sawbucks. They were replaced by using manta on side packs, which was more convenient than top packs and the diamond hitch, and they are easier on the animal. The last diamond hitch that I can remember seeing "thrown" in the Forest Service was in 1928.

Mules have certain habits and characteristics that make them superior to horses for mountain packing. They are more sure-footed, require less feed, and can carry a heavier load. Side packs of 125 pounds each are considered a fair load for a mule, while 100 pounds would be sufficient load for a horse. Mules will not bump a pack against a tree if there is a possible chance of missing it. This is not true with horses. Also, if a "string" of horses is turned out to graze at night, they may scatter and be found in several groups. Even lone animals will be off by themselves. Mules will remain with the "bell mare."

The height of packing came to the Flathead Forest during the late 1920's and early thirties. Roads began to replace trails; the big trail-building program was over. Packing has steadily declined since that time. There are only two "full strings" left on the Flathead today: one at Spotted Bear and one at Big Prairie.

To assume that packing supplies with mules was always a smooth operation would be grossly untrue. Packs were sometimes bucked off or would turn under the animal's belly. There are many instances of packstrings being wrecked by falling from the trail and rolling down the mountain. Many head of packstock have been killed by accidents of this kind. Sometimes a packstring would get "spooked"; they would break apart and buck off packs all over the mountainside.

When a mixup like this happens to a packer who is alone and a long way from camp, he has the discouraging job of rounding up all of them, repairing broken equipment, finding his packs, and getting the string loaded again.

This disheartening situation has happened to anyone who has ever done very much packing. I can't think of a much more discouraging situation, especially if the weather is bad, the terrain is rough, and it is getting dark.

The grandest mixup of all, I believe, happened at Spotted Bear Ranger Station in the late 1920's. Eleven full strings (10 head each) were packing out of there for the Spotted Bear, Black Bear, and Big Prairie Districts. One morning nine of these strings were going to leave the station for various destinations. The strings were packed and were ready to leave at about the same time. Packstrings were tied up all over the place when Jack Langtree, the station cook, asked the packers to come in for a cup of coffee before they pulled out.

While they were in the kitchen tent drinking their coffee, something "spooked" one string. They broke loose and started bucking, bawling, and running through the other eight strings. This caused every string to break apart and stampede. There were mules and horses bucking and running all over the Spotted Bear Ranger Station administration site. Ninety head of horses and mules were involved in this mixup. Some of them became tangled up. Some were down. But most of them stampeded into the woods, trailing packs and equipment as they ran.

This happened at about 9 a.m. But nobody got his outfit together that day. Mules and packs were found the next day as far away as Harrison Creek, eight miles south of the Station. Some were found on Horse Ridge and in Twin Flats in the other direction. The next day, some mules were found still carrying their packs. Others lost their packs, saddles, and halters. This was a tremendous job for these nine, experienced men. Much of the equipment had to be repaired. It was difficult to identify individual packs and determine where they were to be taken. Some packs were torn open and the contents scattered over large areas. 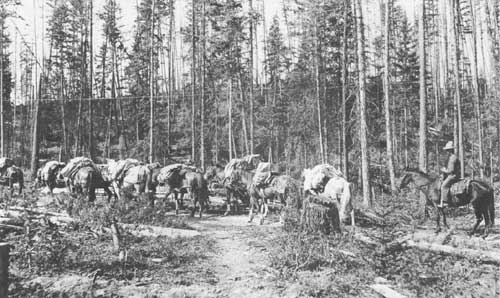 Some of the animals lost some hair or suffered rope burns; none were hurt seriously. The mess was eventually straightened out, and the packers were on their way. The packers, in a class by themselves, accepted the mishap as part of the work of moving Forest Service supplies over mountain trails. E. H. (Slim) Buck, who now lives in Kalispell, was one of the nine packers.

Much of this information is from personal experience in packing. Glen Phanco, J. R. Hutchinson, and E. H. Buck, early packers in the Flathead, have told me many stories of their packing experiences in the Flathead.