Before the Flathead Forest Reserve was set aside in 1897, many homesteaders, people with preemptive claims, and others who had taken "squatter's rights" were living on and filed claim to tracts of vacant public domain lands. On the Tally Lake District, there were approximately 50 such tracts in and around Star Meadows.

Early settlers took title to practically all the suitable land up on the North Fork and much of the land in the Swan Valley. Most of these areas remain in private ownership today. Except for the upper South Fork on Danaher Creek, the South Fork and the Middle Fork above the railroad were never filed on by these adventurous pioneers. Two homesteads of 160 acres each were filed in 1898 by Thomas Danaher and A. B. McCrea. These homesteads were purchased by the Federal Government after the area was included in the South Fork Primitive Area. Northern Pacific Railway land grants in the upper South Fork were all acquired by land exchange and are now part of the Flathead National Forest.

Mickey Wagoner's homestead, above Martin City, was the farthest homestead up the South Fork. There were no homesteads on the Middle Fork River above Bear Creek.

A special-use permit was granted on Morrison Creek, about a mile above the Three Forks cabin, in the early 1920's to a Denver attorney named Hunter. The Hunter family used it as a summer home until 1928. Today only the ruins of the cabin's rock chimney remain.

About 1919, a special-use permit was issued on Hahn Creek, a branch of Young's Creek, on the upper South Fork above Big Prairie, to Ruby Kirchbalm. After divorcing her rich physician-husband, Ruby fell in love with the "great out-of-doors." She bought a string of horses, hired "Smokey" Denow as a packer, and started a packing business. Ruby proved an able packer. Teamed with "Smokey", a rugged, Paul Bunyan type, Ruby Kirchbalm moved a lot of freight in the Flathead country. Often they packed for the Forest Service in the summer. They wintered their stock in the upper South Fork for several years.

After 5 years, Ruby's interest in the back country paled. She returned to the East in 1924.

Ray Trueman was District Ranger at Big Prairie most of the time Ruby was in the Flathead. Shortly after she left, Trueman went East to visit her. He overstayed his leave from the Forest Service and requested an extension. When the extension expired, he asked for another. It was not granted. Trueman never returned to Montana. It was learned that Trueman and Ruby were married and later moved to California.

Denow lived near Deer Lodge in his later years. He died in 1955.

Just east of the Forest Service's Hahn Creek administrative site cabin, you can still see the cement "pad" where Ruby's cabin was built more than 45 years ago.

About 1919, Joe Murphy of Ovando started packing hunters into the South Fork. He always camped on the open flats below Holbrook Creek across the South Fork from White River. Today this area is known as Murphy Flats. The Forest Service issued Murphy a special-use permit for the area in 1922. He built some nice log cabins and a lodge. They served as his hunting headquarters until about 1937 when the permit was terminated by mutual agreement. The area was then in the South Fork Primitive Area. Murphy and his sons still use the area as their headquarters when in the area with fishing and hunting parties.

In the fall of 1949 when the Murphys were breaking camp near the end of the hunting season, their party consisted of 22 hunters, not counting Murphy's help. Each hunter had an elk. Murphy, his sons, and packers moved this party and meat, all in one trip. Each hunter had a saddle horse. Murphy had seven pack strings of ten head each. There was a total of nearly 100 horses and mules. Murphy's outfit is perhaps the largest and best that has used the Bob Marshall Wilderness for any length of time. Joe Murphy has personally used this same area for 45 continuous years.

The Murphy and Kirchbalm special-use permits—first issued over 40 years ago—are the only ones ever issued on the South Fork above Spotted Bear. Creation of the South Fork Primitive Area in 1931, and subsequently the Bob Marshall Wilderness in 1941, precludes any permanent camps in this area.

There have been many special-use permits issued by the Flathead Forest. In the towns of Belton and Essex the school and many of the homes are built on Federal land.

Perhaps the best known Flathead special-use permit is that for the Big Mountain ski resort. Part of this recreation area is on National Forest land. It operates under a special-use permit to Winter Sports Incorporated, Whitefish, Montana. 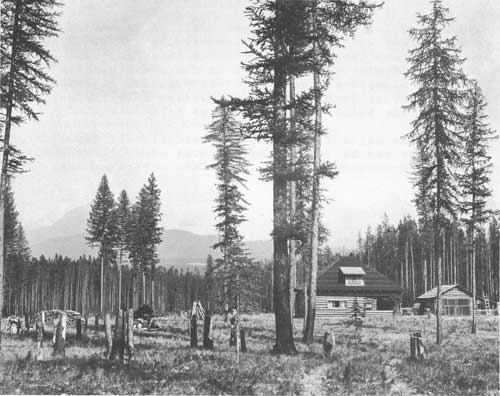 Homestead on North Fork of the Flathead River, 1926.

In September of 1937, when I was Ranger at Tally Lake and Lloyd Muldown was teaching in Whitefish, Muldown contacted me about a permit to build a one-room warming cabin on a spring in the Big Mountain area. There was no Whitefish skiing organization at that time, but a few Whitefish and Kalispell people hiked up the trail to enjoy the area's excellent skiing.

While they knew just where they wanted to build the cabin, they didn't know if it was private or National Forest land.

Muldown and I rode horses up the trail on Labor Day of 1937 to where they wanted to build the warming cabin. I set up my compass and took several shots at known mountain peaks in order to "3 point" the location on a half-inch scale map. Lloyd was pleased to learn that the proposed location was on National Forest land. We placed a stake near the spring and the cabin was built there later that fall.

This was the beginning of the Big Mountain ski resort, today the largest and best-known Montana ski area. Lloyd Muldown is now superintendent of the Whitefish school system.