The national forests of the East and South are protecting the watersheds and helping to control the flow of many of the most important rivers and streams; they are producing continuous timber crops; they are demonstrating to the public the technic and results of extensive practical forestry; they are great, free, public playgrounds, and they are furnishing homes and protection to game animals, birds, and fish.

There is abundant land for farm, pasture, and forests. Put every acre to its most profitable use; make it yield its maximum crop. 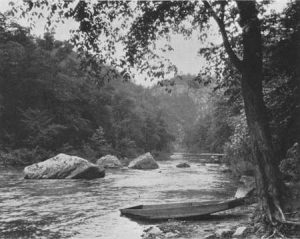 FIGURE 3.—A mountain river protected at its source by a national forest (F—238463)

The national forests furnish continual protection to watersheds. Falling leaves, decaying organic matter, and a network of roots in the soil hold rain and snow water as a gigantic sponge, allowing it to seep slowly and evenly into the springs and stream heads, preventing destructive floods from heavy rains or melting snows, and insuring an adequate stream flow even during the driest part of the year. This insures constant hydroelectric power which is of vital importance to eastern and southern industry. It insures water supply for domestic, agricultural, and municipal purposes. It reduces erosion on the hillsides, lessens the silt burden of the streams and renders unnecessary costly dredging operations to keep the harbors and rivers open for shipping.

"The man who plants a tree becomes a partner with God in a creative act, for we can not build trees—we can only preside at the mystery of their growth."

The national forests of the East and South, scattered through a vast territory from New England to the Gulf of Mexico and from the Atlantic coast to Oklahoma, with Puerto Rico for good measure, include a great variety of forest types. The commercial forests range from the spruce and fir of New Hampshire through the oak, chestnut, and poplar forests of the southern Appalachians, the open, parklike pine forests of the coastal plain, to the rolling, hilly, shortleaf pine forests of Arkansas.

Of the 5,000,000 acres in these national forests only a small part is virgin timber. (Fig. 4.) Even the timber stands of the public domain forests, which have not been subjected to unregulated cutting, have been repeatedly damaged by forest fires. Such is nature's resistance, however, that there is still in these forests over 5,000,000,000 board feet of saw timber, as well as quantities of tanbark, telephone poles, mine props, pulpwood, and other products, in all, a total of approximately 9,000,000,000 feet. 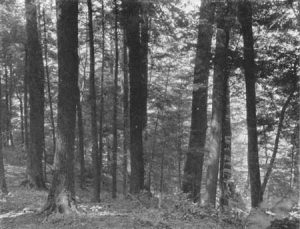 About 25 per cent of these stands is overmature and decadent, 40 per cent is fully mature and is no longer growing at a profitable rate, and the remainder, approximately 35 per cent, is immature.

When one tree crop is mature it must be removed to make room for the growth of another similar crop. So the timber is not left to decay after it becomes mature, but is sold as soon as it is ripe for the axe. The harvesting is now in progress and will continue indefinitely, gradually increasing as the forests recover from the past treatment, until the highest attainable sustained annual yield of lumber and timber products is reached. (Fig. 5.) 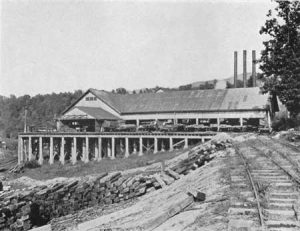 With the exception of small sales, of a value of less than $500, all national-forest timber is sold on the basis of competitive bids. When timber is ripe, it is placed on sale and advertised. Every tree must be marked or designated for cutting by a trained forester, provision always being made for leaving enough young trees or seed trees to insure a future crop. Fortunately, in this region careful cutting and fire protection will usually insure a second crop without planting.

Of the total area in the national forests of the East and South, there are about 205,000 acres which will not reproduce naturally and must be planted. These areas are largely the burned spruce and hardwood lands in West Virginia and Pennsylvania, the burns in the southern pine areas, and the abandoned farm lands in the southern Appalachian Mountains. To provide the trees for this work, a nursery with an annual capacity of 2,000,000 trees has been established at Parsons, W. Va., (fig. 6) and another of 1,000,000 trees a year capacity on the Ozark National Forest in Arkansas. 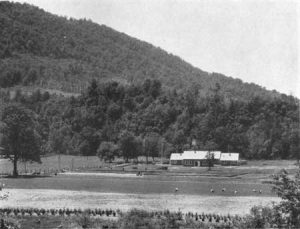 Although these national forests of the East and South will continuously produce large quantities of valuable timber, they can never be expected to supply all of the timber needs of the portion of the country they serve, for the 60,000,000 people within this region use as a whole some 20,000,000,000 feet of lumber each year. Most of this must come from other millions of acres of timberland in State or private ownership.

The national forests, however, will develop the technic and pave the way for successful management of these private lands on a permanent basis. Each national forest will become for its particular region a living, growing example of forestry.

Receipts from the sale of national-forest timber are gradually increasing. Twenty-five per cent of all receipts is prorated on an acreage basis and distributed to the counties in which the forests lie, to be used by the counties for road and school expenses. Ten per cent of the gross receipts is used by the Forest Service in the improvement of roads and trails in and near the forest. During the fiscal year ended June 30, 1930, receipts from the national forests in Virginia, for example, were sufficient to return to the counties in which national forests occur an amount equal to something over 2 cents an acre for each acre of national-forest land. In many cases this exceeds the revenue in taxes formerly received by the counties on the same land before it was purchased by the United States. With continued, careful protection these public timber-producing farms will eventually pay a considerable profit to the owners—the American public.

In the field of recreation, as in all other activities, the national forests are managed for the greatest good to the greatest number in the long run. The production of timber and the protection of watersheds do not preclude the use of the national forests as playgrounds. Each year more and more people are seeking relief from congested centers by vacationing in wooded hills. (Fig. 7.) Recreation in the forests is free, and the public may come and go at will. 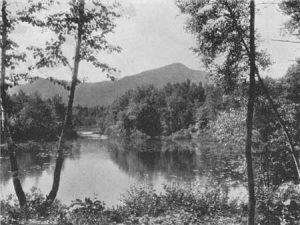 Within these national forests is some of the most picturesque scenery in the country—the highest peaks east of the Rockies, broad expanses of unbroken forests, quiet, secluded nooks beside mountain streams, nature at her best at any time of the year, and all made accessible and more enjoyable through the development of roads, trails, camp grounds, and other facilities.

The Forest Service realizes the recreational importance of these millions of acres of national forests and is developing for each unit plans which take into consideration the factors bearing upon recreational values and demands to be met. Following study, certain areas are set aside as camp grounds. These areas are fireproofed, as far as possible; water supplies are insured against contamination; rustic tables, fire places, and sanitary facilities are provided; and sometimes simple shelters are built.

Boy Scouts, Girl Scouts, and other similar groups are encouraged to develop their camps in the forests. Hundreds of miles of motor roads connecting with the principal national and State highways have been built through the forests. In addition, there are some 3,000 miles of foot and saddle trails leading from the motor roads back into the remote places that satisfy the exploring instinct of the seasoned woodsman. 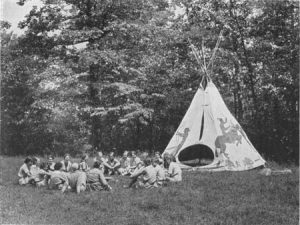 Most of these roads and trails have been built for the control of forest fires, for the removal of timber and other products, and to make the forests more accessible for administration. Few of them were built purely for recreational purposes, but that they serve this purpose is evidenced by the increasing thousands visiting the forests each year.

Visitors must use great care with fire to prevent the destruction of their playgrounds by the forest's worst enemy—fire. Visitors are not permitted to cut green trees or otherwise damage the forest. They are required to leave camp grounds clean and to pick up and destroy all lunch papers or other material that would render the camp ground unsightly. (Fig. 9.) 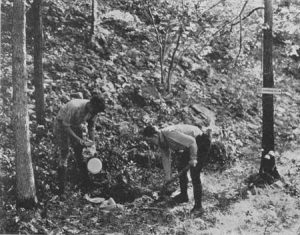 For the tenderfoot there are numerous stopping places—attractive hotels, mountain and shore resorts. For the more hardened campers, there are millions of acres in which to choose a camp site far from civilization. Dead wood for fire may be had without cost. One may hike, ride, swim, join the thrilling sport of a fox chase or bear hunt, climb to the heights and command a view of striking beauty, or just stay in camp and rest. And the cost—as little or as much as desired. The forest rangers and forest guards will advise as to camping places and equipment, and furnish maps and other information to make a visit pleasant and profitable. They will demand care with fire and explain other forest regulations, and give help in case of emergency.

Death walks where campers are careless with fire; death to the forest, to forest life, and sometimes to the campers.

Other Uses of the Forest

In purchasing these broad expanses of mountain land, small areas of abandoned farm lands sometimes with small log cabins or other buildings still habitable, have been included. The buildings are leased at reasonable rental as homes for fire fighters and other laborers necessary for the protection and development of the forest.

Cattle, horses, and sheep are allowed to graze on the national forests under permit and at reasonable rates. Great care is exercised to limit the number of animals grazing in the forests so as to prevent damage to the growing timber. 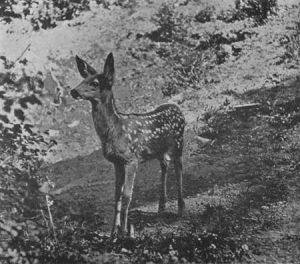 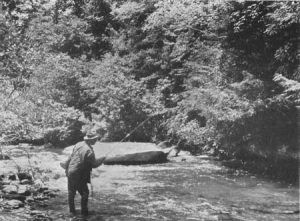 Under necessary regulations, prospecting, mining, quarrying of rock and gravel, operation of stores, hotels, resorts, and other commercial enterprises can be carried on within the forests. In short, the national forests are for use, the aim of the Forest Service being to insure that each acre of public forest land is used for the purpose for which it is best adapted so as to return the highest net value to the general public.

The national forests of the Eastern Region have still another important mission to fulfill. They are functioning as practical laboratories where the Forest Service is working out problems in timber growing and land management. There are three experiment stations in this region, each with its corps of men trained in research, seeking for new facts to be applied to growing eastern tree species. The problems solved furnish a large fund of information available to the public. Publications covering many phases of the forest problems are distributed, and the forest officers and members of the regional forester's office are glad to supply information and, as far as possible, answer questions on any phase of forest management.

If you don't know, ask the forest ranger.