How the Eastern Forests Were Established

In 1900, nearly 300 years after the first English settlement in North America, an awakened public consciousness of the rapid destruction of forests and the damage to watersheds occasioned by unregulated cutting and fire resulted in an investigation of these conditions in the remaining forests of the East and South. (Fig. 2.) 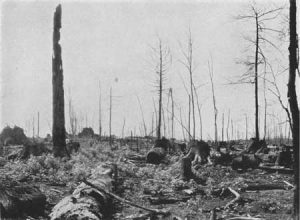 This investigation brought about in 1911 the enactment of the Weeks law creating the National Forest Reservation Commission and authorizing the purchase by the United States Government of lands for the protection of the watersheds of navigable streams. In 1924 Congress passed the Clarke-McNary law, which, together with its other provisions, so amended the Weeks Act that authorization was extended to the purchase of lands for the "production of timber." This made possible the creation of national forests for the purpose of timber production as well as for watershed protection.

With the first purchase in 1913 began the building up of a chain of national forests through New Hampshire, Maine, Pennsylvania, Virginia, West Virginia, Tennessee, North Carolina, South Carolina, Georgia, Florida, Alabama, Mississippi, Louisiana, Oklahoma, and Arkansas. There were already public-land forests in Arkansas, Florida, and Puerto Rico, which, with purchases under the Weeks law and the Clarke McNary law, now make a total of approximately 5,000,000 acres.

Under both the Weeks law and the Clarke-McNary law there is still much to be done in completing the purchases in the established forests and in extending the purchase work into other regions where needs exist. Lands in Kentucky and Vermont are under consideration for purchase.

The trees of the forests beautify the land, regulate the water flow, influence climate, aid agriculture, and foster wild life.