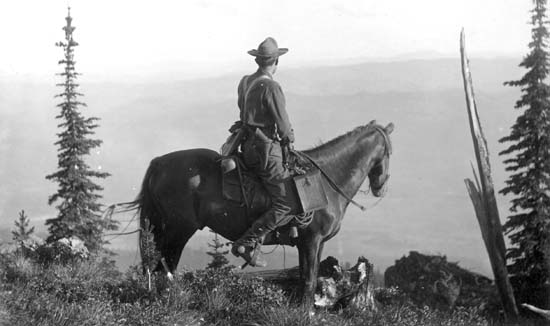 The Forest Service Headquarters History Collection contains many materials concerning the experiences of the forest rangers of the early 1900's. If you were already a forest officer, you may have received a letter like this one sent in 1905 from Forest Service Chief Gifford Pinchot to Seth Bullock, Forest Supervisor. If you were an aspiring forest ranger, you'd first have to meet the qualifications for rangers, and then pass a test like one of these: the 1908 Ranger Examination or the 1925 Ranger Examination. Not so happy with your Forest Service experience? Maybe you'd write a resignation letter to the Chief like this one written by Fred S. Breen in 1908. If you were a little happier, however, or were just trying to make the best of the situation, you might be composing or singing Rangers' Songs. For details on the daily life of an early forest ranger, see the diaries of Martin L. McAllister written between 1907 and 1919. More early ranger experiences can be found in an account from Stephen A. Nash-Boulden, who later became Supervisor of the Cleveland and Santa Barbara (later Los Padres) national forests in southern California from the 1920s to the 1940s. Still looking for more on ranger life? Check out this bibliography of Early Ranger Experiences from materials in the History Collection.

"Information Regarding Employment on the National Forests," 1907. [PDF]

"Forest Reserves and Forest Rangers." USFS: Celebrating a Century of Service: A Glance at the Agency's History, 2005.

Please note that many of these pages contain transcriptions of the original documents, not scanned copies; however, the layout reflects the general style and organization of the originals where possible.