The William Laughead Papers, introduced in a previous post, continue to delight.  Among the Bunyan-related materials, we found an advertising booklet heralding "Paul Bunyan's Prosperity Special."

This pamphlet documents the Red River Lumber Company's strategy to capitalize on the excitement surrounding the completion of the Western Pacific and Great Northern rail connection. On November 10, 1931, Arthur Curtis James drove the Golden Spike at Bieber, California, opening the "Inside Gateway" to California -- Great Northern Railway's effort to compete with the Southern Pacific Company's route between Oregon and California. 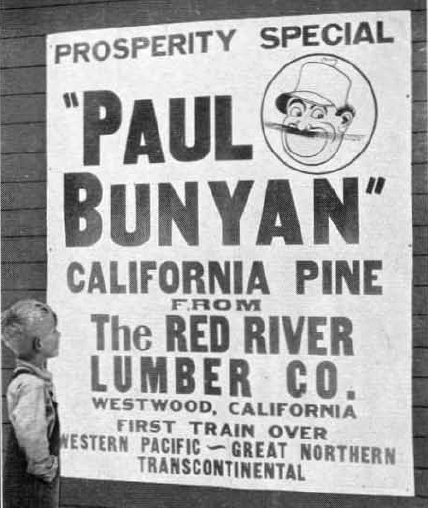 On this same date, the Red River Lumber Company shipped a special train of lumber products from their plant at Westwood, California. Laughead's mustachioed Paul Bunyan adorned the train cars and locomotive tanks, and the 171 cars, six locomotives, and caboose cut an impressive figure, if the ad men can be believed.  According to the pamphlet, the train, at 8,325 feet long (that's nearly 1.6 miles!), was, at the time,  "one of the longest, if not the longest string of loaded cars ever handled in one train movement.  It [was] the largest single shipment of lumber products ever made, with the added distinction that it was manufactured and shipped by one producer at one plant."

Bear in mind that these events occurred in 1931, with the Great Depression underway. Granting advertising materials license for hyperbole, I find the language used to celebrate the railway connection and the log shipment fascinating and not unlike today's promotion of recovery efforts. Indeed, the very choice of "Prosperity Special" packs a more pungent punch when viewed through the lens of economic hardship.

A demonstration to stimulate public confidence by offering a concrete example of the faith of the lumber industry in the basic soundness of American business. ...

... When 171 carload orders could be assembled in one train it became a mighty symbol of returning prosperity and as such was given publicity as a stimulus to public confidence. ...

... The 171-car demonstration of optimism by the lumber industry was timely in its connection with the dedication of this great railroad project.

Here was a fifteen million dollar program carried thru during a time of general pessimism. ...

[Customer orders were] particularly noteworthy coming at a time when all buying was on an ultra-conservative basis and at a season of the year when buying is normally held at the minimum.