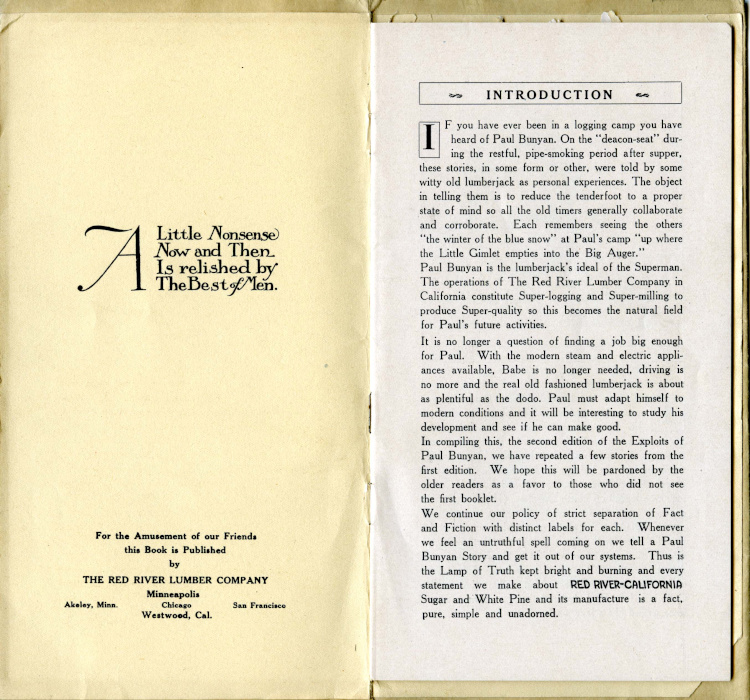 When the Red River Lumber Company installed electrically operated mills in California, logs could be devoured "faster than a small boy devours a cookie."  At the prospect of keeping the mills supplied with enough lumber to match the incredible processing speed, logging contractors shook their heads and said, "Send for Paul Bunyan."  Or so claimed William B. Laughead, former lumberjack, artist, and freelance advertising man.

... said that an idea he wanted to get over was that "we're operating in a big way out here so we have a big production, and it will be a reliable source of supply for wholesalers and buyers to hook up with. That's the idea that we've got to sell - not only to our old customers in the Mississippi Valley but the new territory we've got to break into, east on the Atlantic seaboard, that we've never had contact with before. We want them to know it's the same kind of pine that they've been using, and that we can handle business in a big way with a big manufacturing capacity out there." So I said to him, "That's kind of a big message to get over in a short time. Maybe we could get ahold of some kind of a slogan that would tie us up with the old traditions of the eastern white pine and carry them right over into the West. They're getting the same thing."

Paul Bunyan first appeared in print in 1906 but languished in relative obscurity until Laughead's efforts for the Red River advertising campaign.  Reporter James MacGillivray had gathered stories from lumber camps and added his own touches, which eventually culminated in an unsigned story, entitled "The Round River Drive," that appeared in the June 24, 1910 Detroit News Tribune.  Four years later an unknown poet set MacGillivray's "The Round River Drive" to verse in the April 25, 1914 issue of American Lumberman magazine.  (More detailed coverage is available in "The First Paul Bunyan Story in Print" from the October 1986 issue of the Journal of Forest History.) Appearing only in local newspapers and lumber trade journals, the prose and verse forms of "The Round River Drive" recorded the Paul Bunyan legend for its traditional audience.

Laughead, however, has been credited with catapulting the little-known folk hero to American national idol. 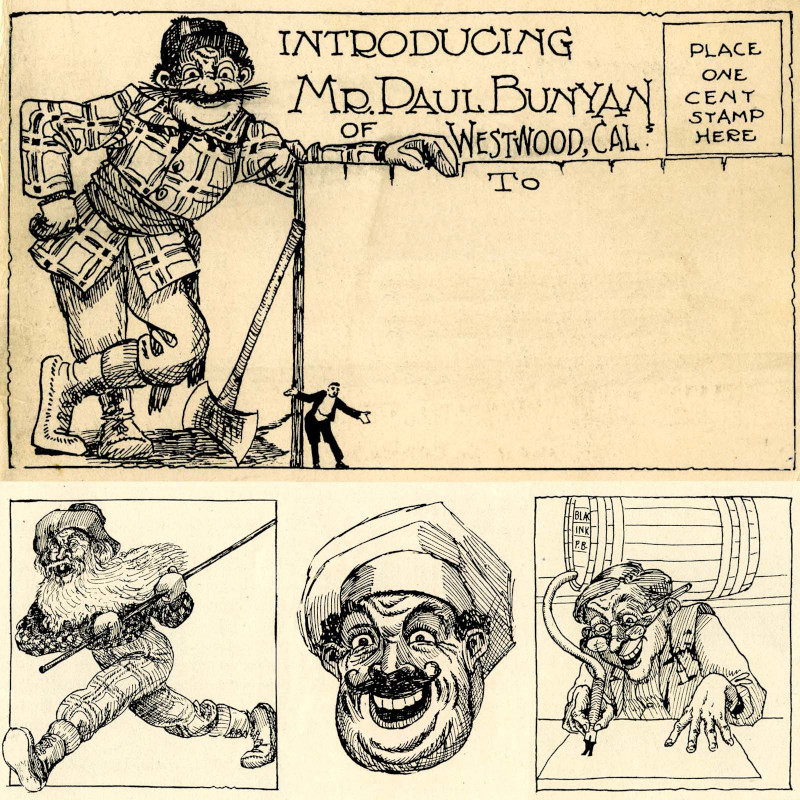 Laughead had never read the MacGillivray's works or derivations of these early stories.  Independently, Laughead began developing a series of pamphlets in which Paul Bunyan tales and cartoons accompanied advertisements for the Red River Lumber Company's goods and services. A postcard-sized booklet Introducing Mr. Paul Bunyan of Westwood, California was published in 1914, and its companion Tales About Paul Bunyan, Volume II was printed just two years later.  Through his text and illustrations, Laughead made significant contributions to the Bunyan canon -- imbuing the legendary lumberjack with personality characteristics; defining Bunyan's iconic appearance; developing wholly new characters, including Babe the Blue Ox and Babe's custodian Brimstone Bill; and bringing minor characters into distincition, including the penny-pinching clerk Johnny Inkslinger and camp cooks Big Joe.

Booklets were mailed to the territory east of the Mississippi Valley.  The initial campaign did not go over well because, Laughead conjectured, Paul Bunyan was not well-known outside his region and outside the lumberjack camps.  Paul Bunyan did not resonate with lumber dealers or manufacturers, and most buyers threw away the early advertisement. As a result, first editions are rare collectors' items due to the immense popularity of Laughead's subsequent pamphlet.

In 1922, the company published The Marvelous Exploits of Paul Bunyan, a re-vamped version of Laughead's first work.  Although intended for the same specialized audience of lumbermen, this booklet unexpectedly had a more far-reaching impact.  A lengthy review of the pamphlet appeared in the Kansas City Star and this coverage introduced the legendary folk hero to the general public.  This new version was an instant success with the public, especially with children.  In the Journal of American Folklore, Max Gartenberg wrote, "Within a few months after its publication the entire edition of 10,000 copies was exhausted, and a reprint of another 5,000 copies could not satisfy the requests of children, teachers, folklorists, statesmen, librarians, soldiers, and sailors -- persons of all interests and walks of life..." 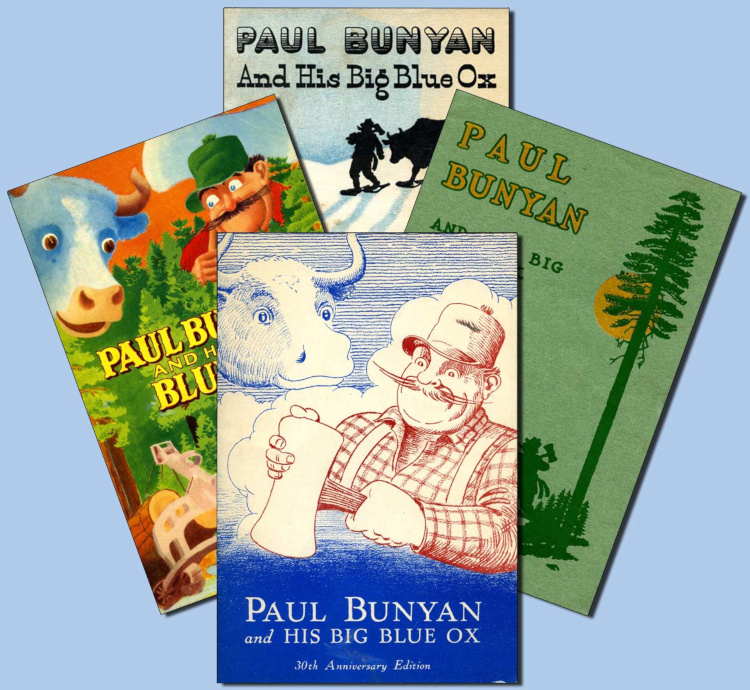 The popularity of the work necessitated the reproduction of new editions for years to follow, culminating with the Thirtieth Anniversary Edition of 1944.  This third advertising pamphlet was occasionally given other titles in subsequent reproductions, one of the most common being Paul Bunyan and His Big Blue Ox.  In 1957, Laughead commented, "My book went through a total of thirteen editions, and we distributed, free of charge, about 110,000 or 125,000 copies."

The Red River Lumber Company capitalized on the increasing popularity of the Paul Bunyan folk legend by engaging Laughead as its full-time Advertising Manager.  The company officially adopted Paul Bunyan's name for use in its business dealings and copyrighted Laughead's illustration of Paul Bunyan's head, using it as a trademark for its products.

While the company embraced the logging salesman, newspapers across the nation printed columns of reader-submitted Paul Bunyan stories and syndicate-created tales.  As the tall tales stretched coast to coast, Paul the Lumberjack-Hero was dwarfed by Paul the American Spirit.  No longer restricted to the woods, Paul Bunyan became a legend of all regions.  Stories credited the lumberman with varied accomplishments, from digging the Puget Sound to succeeding as a Southwest oilman to building the Panama Canal.

As early as 1916, the legendary lumberjack received critical examination; the interest shown by folklorists and other scholars increased as Paul Bunyan captured the popular imagination.  Gartenberg concluded, "In due time poetry, plays, music -- the medium of almost every art -- explored the themes that had been made by the great advertisement.  And thus did a lumberman's advertising scheme become American folklore."

The Forest History Society is fortunate to hold the papers of William B. Laughead, which contain the works and illustrations seen in this post -- and much more.  The finding aid describes the collection in greater detail.

Information in this post was drawn from the articles referenced above as well as the following: