Tongass Timber: A History of Logging and Timber Utilization in Southeast Alaska 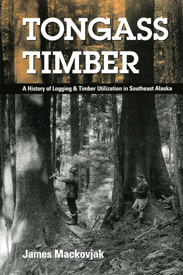 By the late 19th century, the forests of Southeast Alaska were being eyed for economic development and commercial interests had begun harvesting the high-quality Sitka spruce and other species in Alaska’s panhandle. The arrival of high-intensity logging in the 20th century and the establishment of wood pulp mills beginning in 1954, and lasting more than four decades, exposed the environmental and economic limitations of an integrated wood products industry in Alaska. Tongass Timber traces the history of the many attempts to develop the region’s forests, revealing the forces that influence the present choices about forest management in Southeast Alaska.

This publication was supported by the Kendall Foundation, Mike Blackwell, the SB Foundation, the Alaska Historical Society, the Alaska Humanities Forum, and the Lynn W. Day Endowment for Forest History Publications.

James Mackovjak is an independent scholar who lives in Gustavus, Alaska. He moved to Alaska in 1970, where he became involved in forest issues in the 1980’s. During the late 1990’s, he was a member of the governor’s Southeast Alaska Timber Task Force. His local history, Hope & Hard Work: The Early Settlers at Gustavus, Alaska, was published in 1988. More recently, he wrote Navigating Troubled Waters: A History of Commercial Fishing in Glacier Bay, Alaska, for the National Park Service. Current projects include a history of maritime freight service to the Aleutian Islands area and an administrative history of Lake Clark National Park.