On October 15, 1934, workers broke ground for a new school gymnasium in Peshtigo, Wisconsin. To this day, this small city in the far northeast corner of Wisconsin remains best known for being totally consumed by a massive forest fire in 1871. The groundbreaking, while seemingly an unremarkable event, is another turning point in forest history. It signaled a new age of American wood construction. The new Peshtigo school gym was the first building in the United States to use structural glued laminated timber. 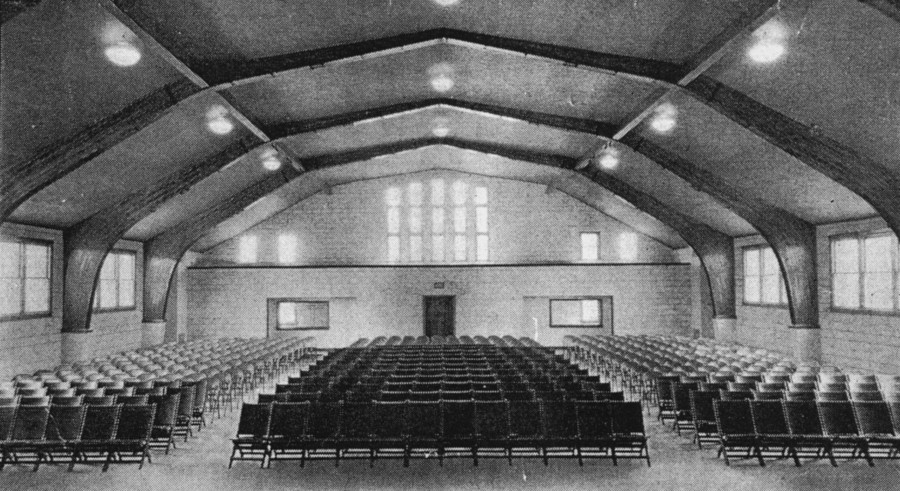 Glued laminated timber, later referred to as simply “glulam,” was a type of structural engineered wood product comprised of a number of layers of wood boards bonded together with durable adhesives. The boards formed a single structure without using nails or bolts, with the finished structures capable of producing massive beams or curved arches. The origins of glued laminated timber technology dated back only a few decades before, to Europe. Otto Karl Freidrich Hetzer, a German carpenter and inventor, obtained a patent in 1901 for a straight beam composed of several laminations bounded with adhesive. Hetzer further refined his work, and five years later was given a patent for curved glued laminated timber construction. In the early decades of the twentieth century, the use of glued laminated timber spread gradually throughout Europe.

Max Hanisch, a German architect and engineer, emigrated to the United States in 1923 with the expressed intent of promoting Hetzer’s glued laminated construction technology in America. This proved a tough sell. His initial efforts were unsuccessful and Hanisch temporarily abandoned the idea, instead working on more traditional projects for various engineering firms over the next decade, ultimately settling in Wisconsin. In 1934 he earned a contract to build a school and community gymnasium in Peshtigo and was finally able to successfully incorporate a Hetzer-style glued laminated arch design.

Hanisch had a contract for the work but now needed to find a way to manufacture the arches, as this type of construction had never been done in America. Looking for a local option, Hanisch linked up with the brothers Peter and Christ Thompson, owners of the Thompson Brothers Boat Company in Peshtigo. The Thompsons had the necessary factory space and wood building expertise to manufacture the needed glued laminated arches, and were willing partners in the venture. Hanisch, his two sons, and the Thompson brothers formed Unit Structures as a new glued laminated timber construction firm, and incorporated the company in Peshtigo in 1934. For the Peshtigo gym, Unit manufactured four spans of three-hinged arches with a clear span of 64 feet, designed to rise to 24 feet at the crown. 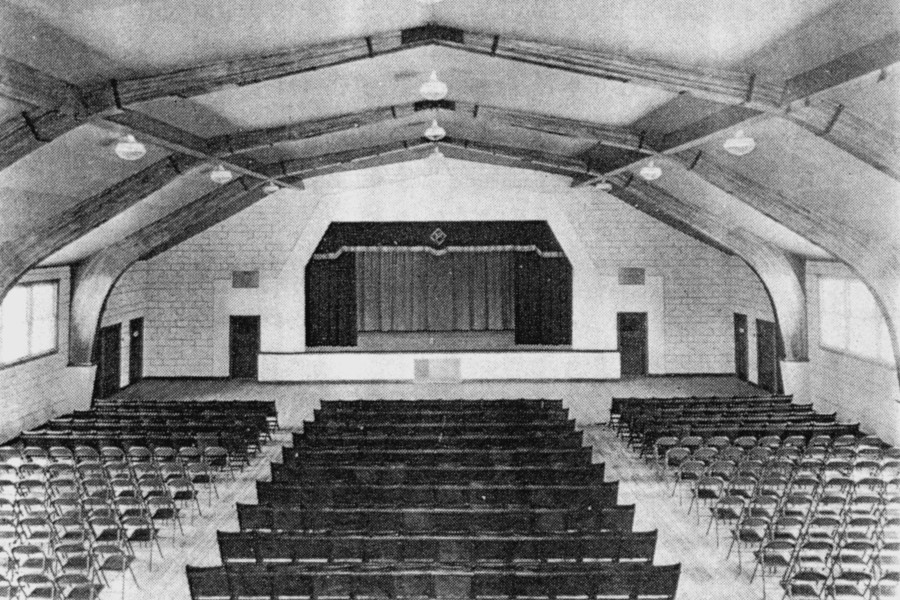 Another view of the Peshtigo gym, showing glued laminated arches.

Glulam construction being brand new to U.S., the Wisconsin Industrial Commission initially rejected the Peshtigo gym design, assuming it would not be sound. Unit Structures consulted with the Forest Products Laboratory (FPL) in Madison for assistance, and a compromise was reached with the commission—the arches would be reinforced with bolts and metal strapping. These reinforcements ultimately proved entirely unnecessary from an engineering standpoint and such additional measures were never used again in American glued laminated timber construction. 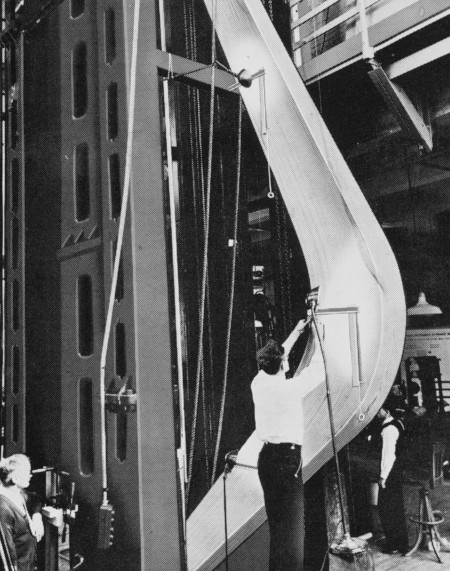 The exchange of ideas and testing assistance from the FPL proved advantageous, though. The lab was impressed by the technology and had Unit build a new storage building on the FPL campus. This would be the second building in the country to use glued laminated timber. Additional positive structural test results from the FPL in the ensuing years led to widespread acceptance of glulam in the building community. Testing showcased the immense strength of glulam beams, as well as proving how the wood was more fire-resistant than steel (not to mention oftentimes being the less costly option when compared directly with steel arches).

In 1952, the American Institute of Timber Construction (AITC) was formed as a trade association to further advocate for glued laminated timber manufacturers in the United States. The AITC developed industry standards and a certification program. Glulam projects became widespread throughout the country, bolstered by the ongoing post–World War II building boom.

Unit Structures merged with the Wood Preserving Division of Koppers Company in 1962. The production headquarters eventually moved to Pittsburgh a few years after the merger. The Peshtigo plant would not be abandoned, though. Maurice J. Rhude, a former vice president of Unit, established Sentinel Structures as a new glulam timber producer, operating out of the same Peshtigo facility that previously housed Unit Structures, Inc. Rhude passed away in 2016, but Sentinel Structures remains a player in the glulam business to this day.

The original 1934 glulam timbers from the Peshtigo gym continue to live on as well. During a remodeling and expansion project in the 1980s, the historic arches were preserved as the gym was converted to a library. The original building stands as an overlooked yet important site of forest products history, as well as an enduring testament to the strength and permanence of glulam timber construction. 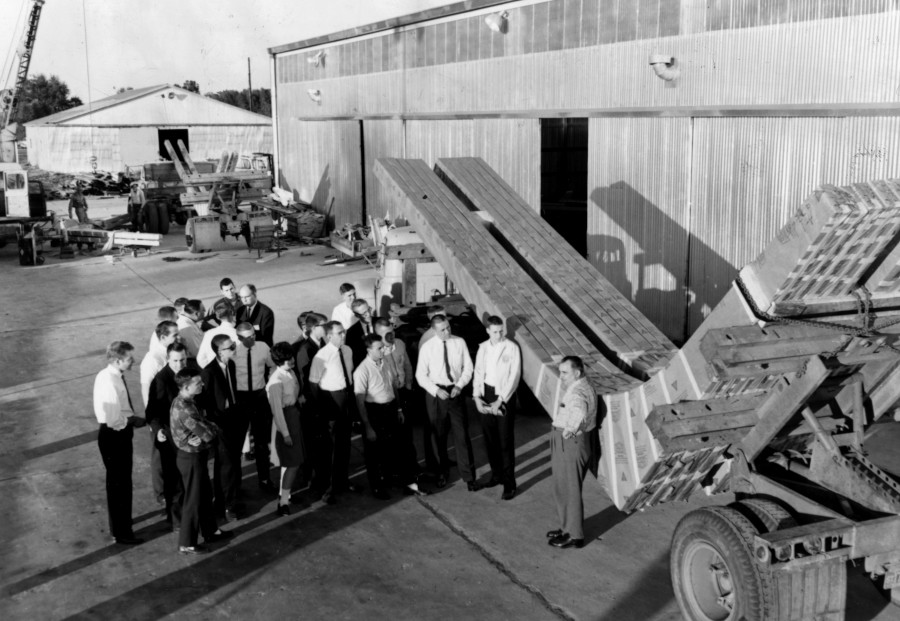 A tour through the Unit Structures laminating plant in Magnolia, Arkansas. 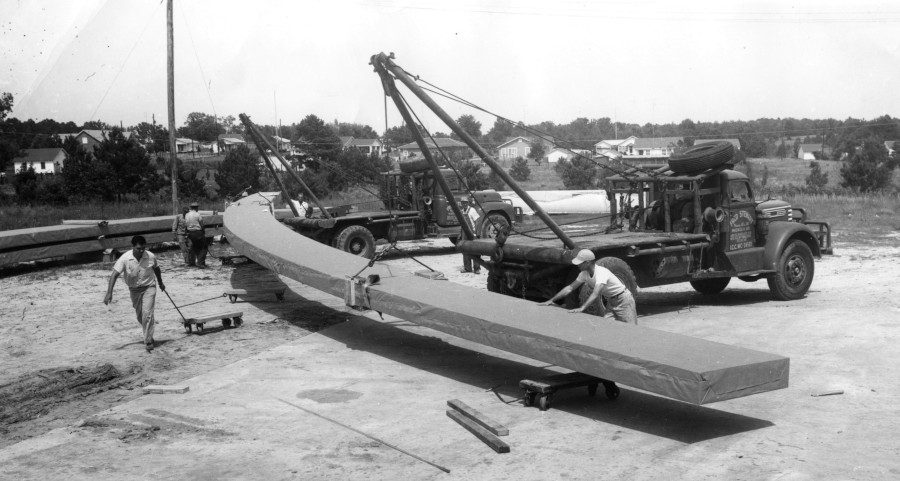 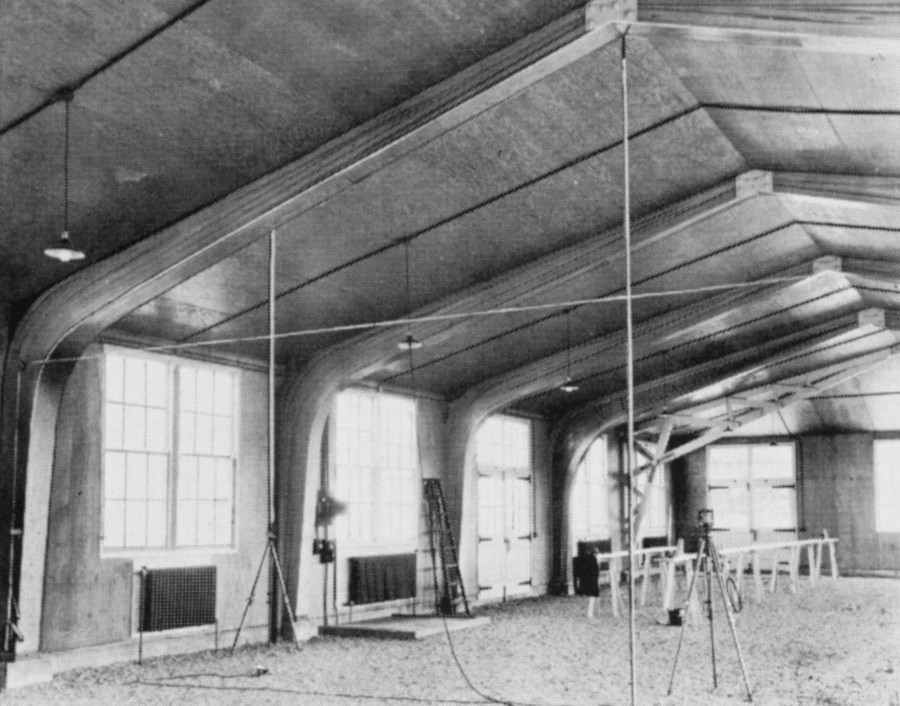 Interior of building at Forest Products Laboratory campus under construction during the winter of 1934/1935, with Unit Structures arches. 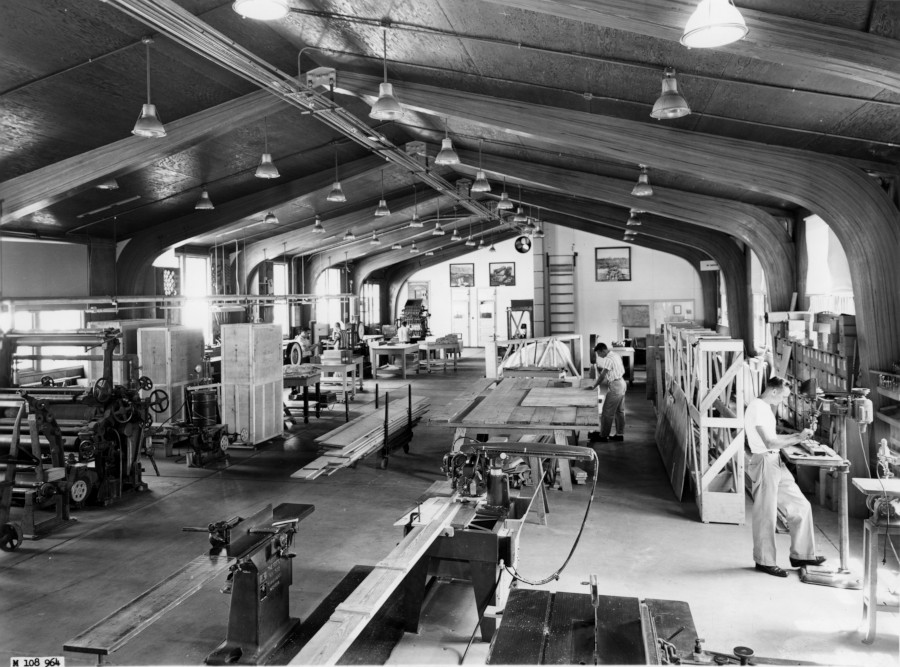 The interior of that same Forest Products Lab building in later years, showing the original glulam arches. The building was ultimately decommissioned in 2010, but the arches remained sound. 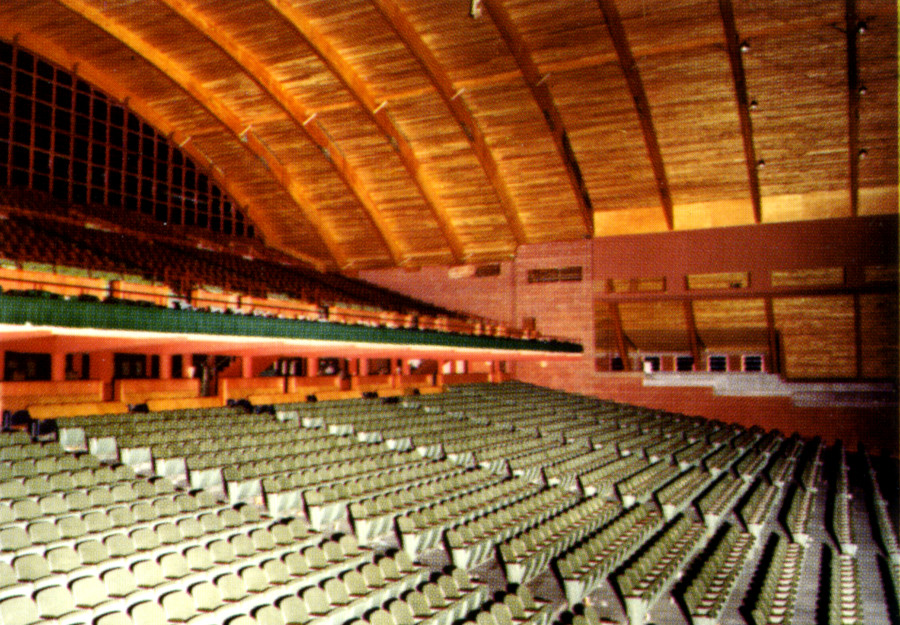 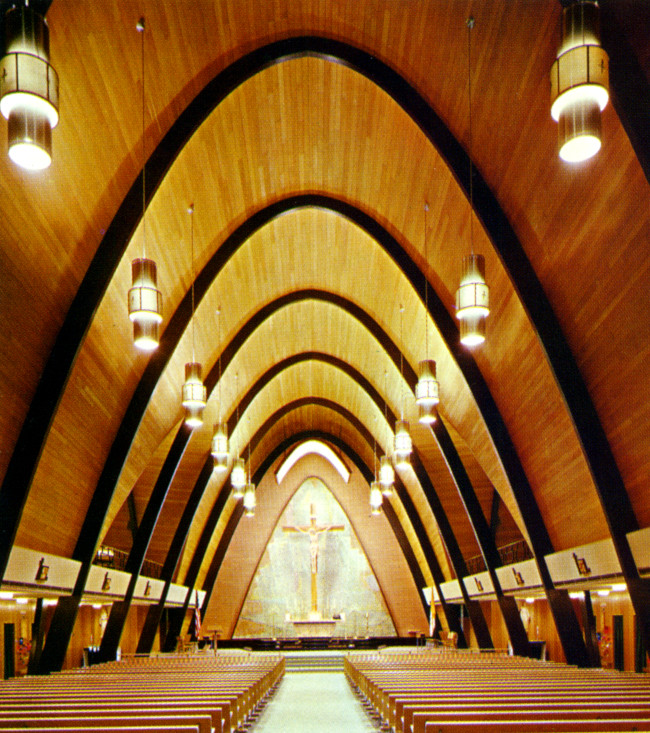 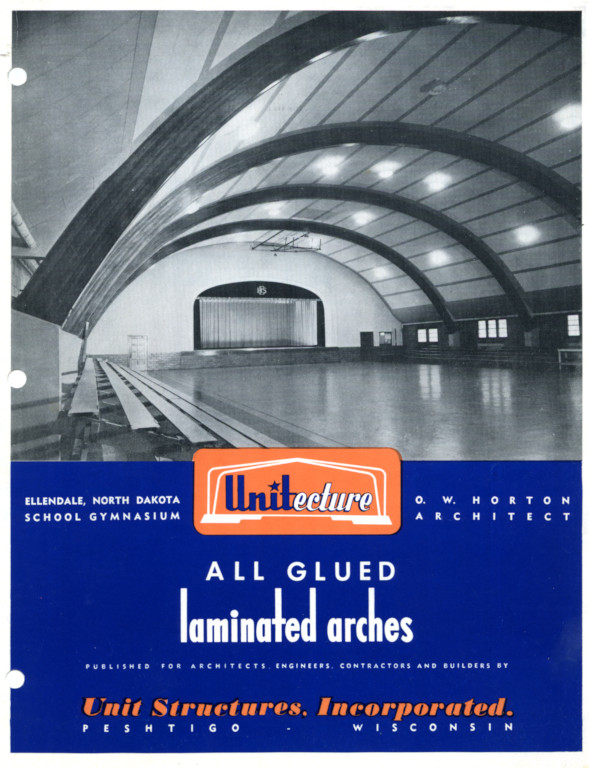 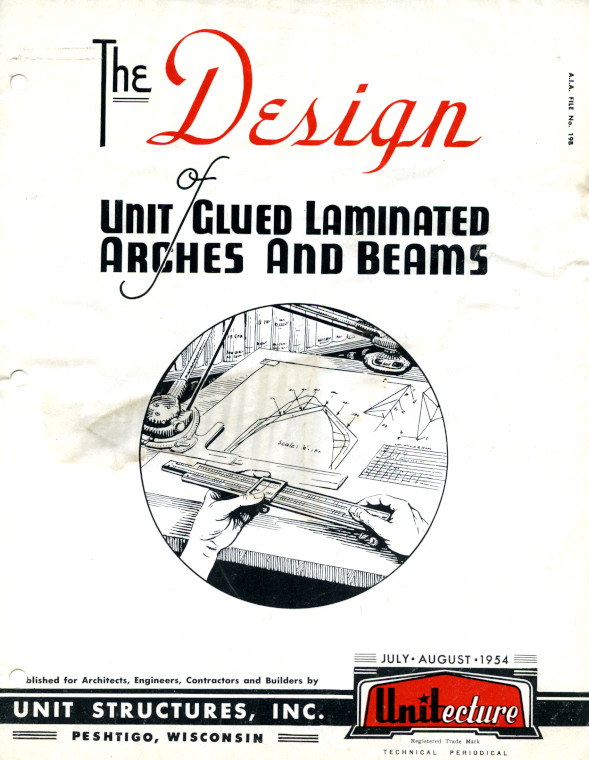 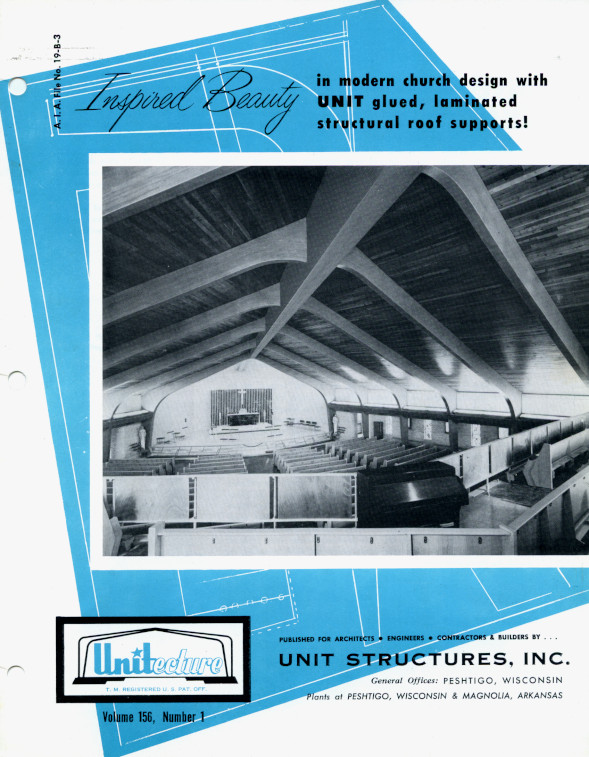 Note: Much of the historical information in this post was drawn from the 1995 paper by Andreas Jordahl Rhude for the History Department of the University of Minnesota: Structural Glued Laminated Timber: History of its Origins and Development.