The Most Epic Forest History Road Trip Yet

This post was first published in the Spring 2017 issue of Forest History Today, which was produced for the National Park Service's centennial, as the "History on the Road" column. It's been adapted for the blog to include more stops at places other than in national parks and seashores.

Last fall, I took a leave of absence and drove from Durham, North Carolina, to attend a writer’s residency program in Point Reyes Station, California. It was truly history on the road, giving me the opportunity to see the variety of sites administered by the National Park Service and U.S. Forest Service. I stopped at or drove past national parks and forests, drove on a road that has been nominated for National Historic Trail status, and spent two weeks just a stone’s throw from Point Reyes National Seashore. The trip also included seeing three presidents’ homes, standing in the lowest elevation point in North America, driving past the highest peak in the Lower 48, and hiking through a national forest that’s home to the oldest living trees on the planet.

Going west, I drove about 8 to 10 hours each day, staying with friends or family along the way (the life of an itinerant historian doesn’t exactly pay well). After a night in Nashville, Tennessee, I angled northwest and went past the Land Between the Lakes National Recreation Area in Tennessee and waved to the Gateway Arch in St. Louis as I sped by on the interstate to Columbia, Missouri. Between there and Denver, my next destination, I visited the homes of two U.S. presidents with Smokey Bear connections. In 1952, President Harry Truman signed the Smokey Bear Act (66 Stat. 92), which protects the Smokey Bear symbol from unauthorized use. His successor, Dwight D. Eisenhower, took delivery of the first Smokey Bear toys a year later, which he promptly gave to his grandchildren. I stopped in Independence, Missouri, to see Truman’s house, located in a residential neighborhood. Not a bad place for a failed haberdasher!

The modest farmhouse outside Abilene, Kansas, where Eisenhower grew up now shares a campus with his museum and presidential library. Like with Truman, the Park Service manages Ike’s home and National Archives the library and museum. I have to say that Ike looked pretty good for 126 years old, although he was a bit on the thin side.

The museum has a cross-section of the famed Eisenhower Tree, a loblolly pine once located on the 17th hole at Augusta National Golf Club (home of the Masters Tournament), of which Ike was a member. Ike hit the pine so many times while playing that he proposed having it cut down. Legend has it that instead of allowing a vote whose outcome would embarrass Ike, the meeting was adjourned.

From Denver I went through Salt Lake City on my way to Reno, Nevada. Having crossed Utah at night on a previous trip, I didn’t see Metaphor: The Tree of Utah, a sculpture along the interstate. It stands at the edge of the road in the middle of the Bonneville Salt Flats, which is managed by the Bureau of Land Management. Fifteen miles west of the sculpture is a rest area. You can walk out onto the flats from there and look towards where the fearless come to set land-speed records in cars and motorcycles. I found this 40-square-mile landform fascinating. It was so flat I’d swear I could see the curvature of the earth.

Caption: “Otherworldly” doesn’t begin to describe this odd bit of public land. Little did I know that this strange vision would be seen again in Death Valley National Park.

From the Salt Flats, I crossed the Great Basin (but did not visit the titular park in eastern Nevada) to Lake Tahoe for yet another quick drive-by tour and on to the Bay Area. The greater San Francisco area is rich in federal public lands, including the Golden Gate Park Headlands, where I watched surfers try their luck in the cold Pacific Ocean; the John Muir Woods, which I’d visited before; and Point Reyes National Seashore, to name a few. 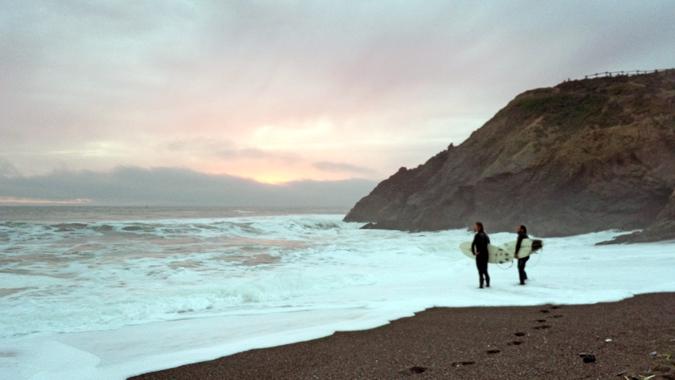 During my stay in Point Reyes Station, which overlooks Tomales Bay, I went on several bike rides through the rolling hills of the national seashore, and twice by car went out to the picturesque lighthouse and walked the beaches. The road to the beach and lighthouse takes you through the historic cattle ranches. But instead of seeing cows grazing, I saw deer and, to my surprise, elk. Later I learned that at the northern end of Point Reyes is the Tule Elk Reserve. The diversity of visual offerings and magnificent beauty across Point Reyes is why I’ve gone there on two other occasions while visiting San Francisco. 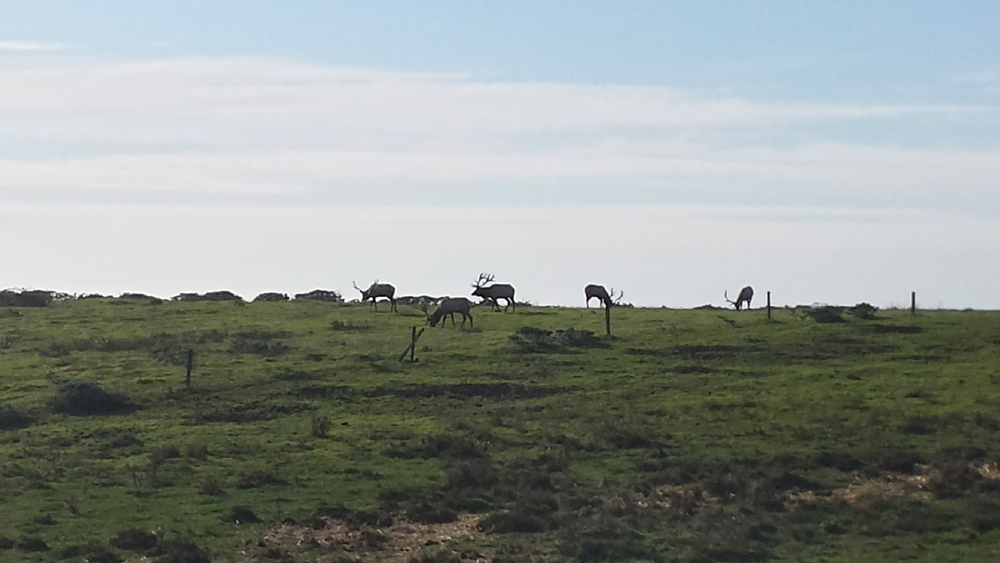 While visiting the Point Reyes lighthouse, I learned the hard way that some of the trees there possess the ability to sneak up on unsuspecting tourists and pounce on them. 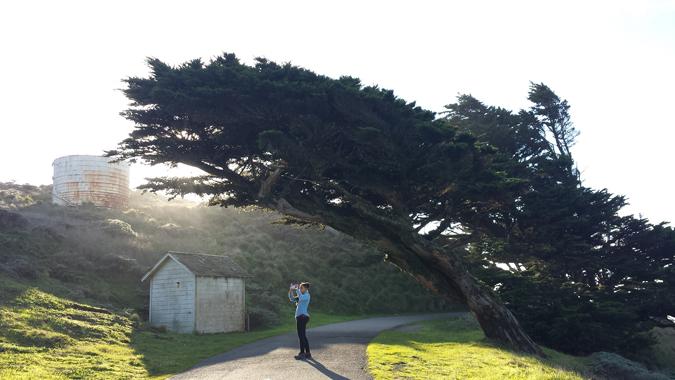 From Point Reyes, I drove back to Lake Tahoe to see the southern shore and camped south of there in Grover Hot Springs State Park, located within the boundaries of the Toiyabe National Forest. I feared for my car because of the size of the giant Jeffrey pine cones falling from the trees. The cones can grow to 9.5 inches and weigh more than half a pound, and on a windy day, they can rain down from above like missiles and damage a car. But they make great kindling for a campfire. Pushing south through Owens Valley, I opted to not go to Yosemite for a fourth time (though I never had a riot of a time there). Instead I watched the sun set over Mono Lake and then stayed in Bishop, California, birthplace of Horace Albright, second director of the National Park Service.

Over the next two days I drove up into the White Mountains to walk through Schulman Grove on the Inyo National Forest. Home to ancient bristlecone pines trees, some of these gnarled living oddities are more than 4,000 years old. One is more fascinating to behold than the next. Each day, though, before climbing to 10,000 feet in elevation from the valley floor into the White Mountains, I stopped to see the giant sequoia tree that stands at the western terminus of the road to Schulman Grove. The contrast between the two species could not be more striking.

After spending two days looking at trees that looked dead, I left for Death Valley National Park. But I could not go there without a visit to Manzanar National Historic Site, the first of the ten World War Two–era Japanese-American internment camps, euphemistically called “war relocation centers,” hastily established in March 1942 by the federal government. My compulsion to see it was driven in part by the call from some following the 2016 election for setting up similar camps for Muslim-Americans. This particular camp was located on the arid, windswept plain a few miles south of the ironically named town of Independence, and adjacent to the Lone Pine Indian Reservation. Conditions in the camp were harsh, but not harsh enough to destroy the love of America felt by detainees. During the war, landscape photographer Ansel Adams photographed the “evacuees” in the camp and the beautiful mountains surrounding it. The exhibits in the interpretive center, housed in the historic high school auditorium, are moving and timely, tracing the history of the impact of wartime hysteria on minority populations in America from the early twentieth century to the present. Calls for imprisoning minorities without just cause in 2016 are just as ignominious and deplorable as they were in 1942. Unembellished facts can be a powerful weapon against bigotry.

I swung quickly through the Alabama Hills to see where dozens of films have been shot, and arrived that evening in Death Valley and camped under a brilliant moon. I took the advice from a ranger I spoke with at Mono Lake to be out in the sand dunes to watch the sunrise, a decision I did not regret. The park’s ecological offerings are more diverse than I imagined, and also offer reminders of other landscapes. Being in between mounds in the Mesquite Flat Dunes reminded me of both Cape Hatteras National Seashore and Great Sand Dunes National Park in southeastern Colorado. The salt flats at Badwater Basin area—282 feet below sea level—cover nearly 200 square miles and bear a striking resemblance to the Great Salt Flats. To leave the park, I headed east and gained more than a mile in elevation. I stopped at Zabriskie Point and Dante’s View to watch the sun set over the far side of the valley. In the fading light, the haze below me made the salt flat look like a flowing river. A full day in Death Valley left me feeling alive.

I didn’t yet know about the Devils Hole Pupfish an hour away, or I would’ve headed there. Instead, after a long, dark drive that night through the desert and Las Vegas (speaking of otherworldly!), I stayed in Kingman, Arizona, along historic Route 66, “The Mother Road.” Famed in song and story, Route 66 was nominated for National Historic Trail status in February 2017, thirty-two years after it was decommissioned.

From there I drove through to Memphis, where I toured the Memphis Rock ‘N’ Soul Museum and Sun Studios for some music history before returning to Nashville, that other music town. While at Sun Studios, I chatted with one of the employees. Brooke turned out to be a passionate environmental educator who has created an unusual character she uses to teach kids about recycling. When leaving Nashville, I did a quick pass by the Hermitage, Andrew Jackson’s home (presidential house number 3!), and then drove on to spend Thanksgiving just north of Cape Hatteras National Seashore.

In ten days’ time, I had walked among the oldest living trees in the world, stood at the lowest point in the northern hemisphere, and visited two national seashores a continent apart. That doesn't take into account the national parks and monuments and historic sites I encountered on the way to California. National parks: America’s best idea, indeed!