On this date in 1940, Washington Governor Clarence D. Martin issued an influential proclamation appealing for the positive action by all of Washington’s citizens in the prevention of wildfires. This public proclamation would directly lead to the creation of the Keep Washington Green Association, an organization whose model was eventually copied by states throughout the country.

Martin's address came at a crucial time in the history of Washington and Oregon’s forests. An increase in destructive forest fires in the Pacific Northwest during the early 20th century had culminated in the Tillamook Burns of the 1930s, a series of fires which destroyed massive amounts of the region's timber. These catastrophic fires led to great concern among foresters and forest industry leaders, including former U.S. Forest Service chief William B. Greeley, who at the time served as head of the West Coast Lumbermen's Association. Greeley publicly called for improved logging practices and more organized fire suppression.  His continued championing of these issues eventually led directly to Washington Governor Martin's public proclamation of May 31, 1940.

Along with his address urging the public to embrace forest fire prevention, Governor Martin also called for a public meeting in Olympia five days later to further address the issues at hand. At this meeting an organization was formed to create publicity campaigns promoting forest fire prevention. Roderick Olzendam, public relations director for Weyerhaeuser Timber Company and originator of such slogans as “Timber is a Crop” and “Tree Farm," proposed the new organization be named Keep Washington Green. As the new organization began implementing forest fire prevention advertising campaigns and radio programs in Washington, the idea quickly began to spread. In May 1941 Oregon Governor Charles Sprague called together 250 state leaders in Portland to replicate the program, and they formed a Keep Oregon Green Association.

Both state organizations undertook increasingly larger projects and campaigns to spread the word about forest fire prevention to the public. Grassroots community-focused plans were established, as well as the production of dramatic radio presentations, newspaper features, and various promotional items. 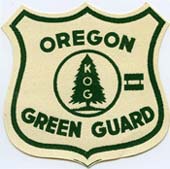 In addition to targeting adults, Richard Kuehner, the first director of Keep Oregon Green, sought to also target the state’s youth. One of the top 4-H leaders in the nation, Kuehner drew on his experiences with youth to develop the Oregon Green Guards in 1942. The Green Guard was aimed at youths aged 8-18 and was designed to supplement organizations such as 4-H clubs, Boy Scouts, and other youth groups. Applicants were sent a Green Guard kit that included a membership card, manual, arm emblem, posters, and other items. The response was extraordinary, as a single initial news release about the Guard yielded thousands of applications. With the massive amount of incoming applications threatening to overwhelm the operations and finances of Keep Oregon Green, the program proved to be almost too successful. Over 30,000 Green Guards ended up being registered within the program’s first few years, even with primarily just word-of-mouth publicity. 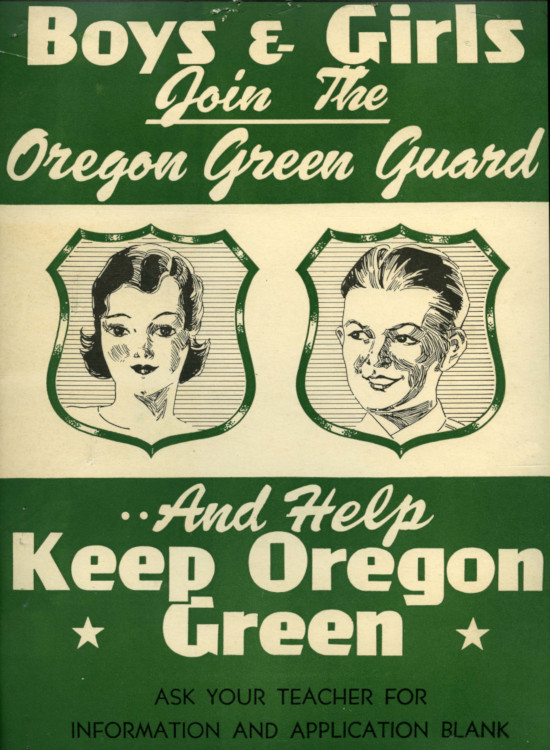 Junior Forest Wardens was a similar program for Washington's youth run during this time by the American Legion. The Junior Forest Wardens and the Green Guard were two of the most successful aspects of the early Keep Green programs. Their success was noticed by the U.S. Forest Service, who also sought to aim fire prevention efforts at children. After the Ad Council and the USFS began the Smokey Bear ad campaign in 1944, a Junior Forest Ranger program was developed using Smokey Bear’s image as well as a membership kit similar to the Green Guard program. 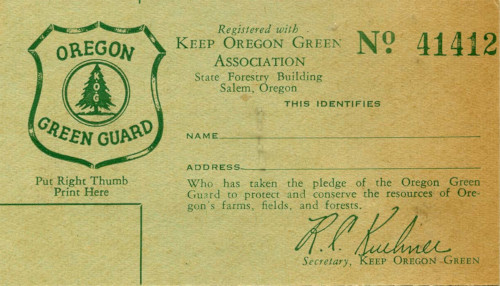 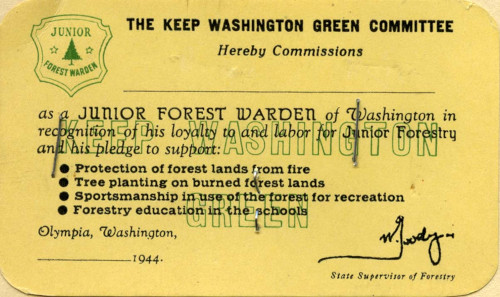 The great success of the Keep Green programs in publicly addressing fire prevention issues did not stop with Washington and Oregon. Idaho, California, and Minnesota soon started their own movements, with many other states also gradually adopting the program. By the beginning of 1949, twenty-four states had their own Keep Green programs. The American Forest Institute established a national Keep America Green program in 1944. 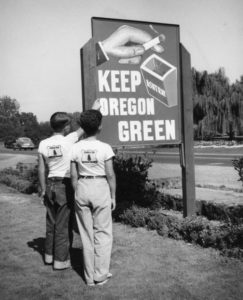 Two members of the Green Guard admire a sign. 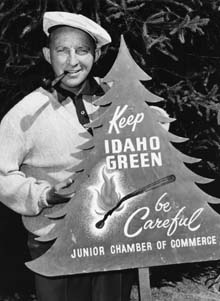 Celebrities like Bing Crosby, an avid outdoorsman and hunter, lent their names and images to the effort.

Throughout the 1940s, these various Keep Green programs proved to be incredibly successful in educating the public about the importance of forest fire prevention. They also provided an excellent foundation for the later success of the Forest Service’s Smokey Bear campaign. While the popularity of Smokey Bear as the dominant symbol of fire suppression contributed to the Keep Green campaigns to eventually fading away, these early campaigns are still noteworthy for their incredible success. Whether due to the Keep Green program or not, forest fires in the Pacific Northwest did begin to decrease in the years following the program's introduction. In Oregon, after totaling more than 1,300 wildfires for each year during the 1930s, the yearly numbers were dramatically reduced during the 1940s, eventually dropping to just 352 fires in the state for the year 1948.

*The various items featured in this post all come from the Forest History Society Archives and Photograph Collection.