A parade, a pageant, and Paul Bunyan. These may not be the first three things that come to mind when you think about fire prevention, but residents of Mason County, Washington, back in 1945 had their own unique ideas. To help combat the destructive wildfires in the region — while also promoting the importance of forests to the local economy — Mason County hosted a forest festival in the spring of 1945. The festival featured a parade through downtown Shelton, a beauty pageant, a Paul Bunyan impersonator, and various other events and activities. The idea proved even more successful than imagined. This weekend Shelton hosts the 69th annual Mason County Forest Festival, which still prominently features a parade, pageant, and Paul Bunyan, just like back in 1945. 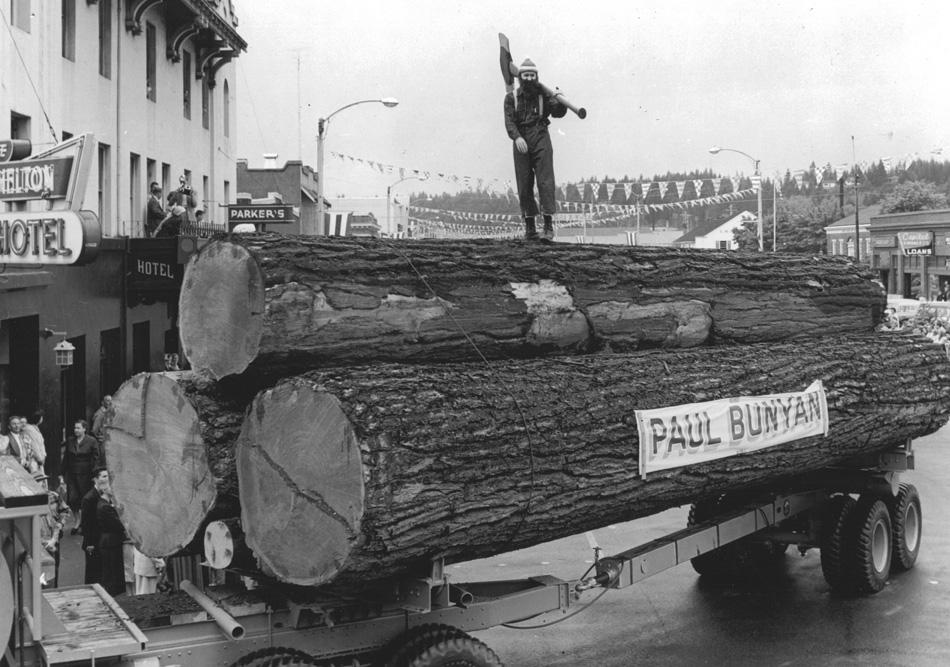 Wayne Allen as Paul Bunyan leads the parade through Shelton, 1954.

The history of Shelton is closely tied with the history of logging operations in the area. In 1853, Michael T. Simmons built the first sawmill in Mason County on Mill Creek just south of present-day Shelton. Around this same time, David Shelton (the town’s namesake) staked a settlement claim on a nearby inlet off Puget Sound. As the town grew, its connections to the forest industry only strengthened. Sol G. Simpson came to the area and founded the Simpson Logging Company in the 1890s. The Simpson Company would eventually grow and expand throughout the country, but Shelton served as an important center of operations for much of the following century. The area was also notable for being the home of the Shelton Cooperative Sustained-Yield Unit, which became active in 1946 and ended in 2002.

The first Mason County Forest Festival in 1945 honored the area’s logging history by showcasing the value of timber to the community, while demonstrating the importance of safeguarding the forests against destructive fires. Fire prevention was a prominent theme, as the Mason County Forest Festival Association was at this time operated as an auxiliary of the local chapter of the Keep Washington Green Committee.

Following that first festival – in which Lois Gibler was crowned Festival Queen and Gus Anderson played the part of Paul Bunyan – the event only grew. People from the northwestern Washington region flocked to Shelton to see, in the words of an ad for the 12th annual Forest Festival, “the dramatic Forest Pageant, the thrilling parade and the exciting contests in which loggers demonstrate their skills at falling, bucking, tree topping and truck driving. For three memorable days, the communities participate in a program which you can’t afford to miss.” The idea of a forest festival quickly spread across the country along with the Keep Green program. “You have in Shelton, in my opinion, the best all-around forest festival in the United States,” read a quote from a mid-1950s article on the event. “It has been the inspiration of many forest communities throughout the U.S.”

The ninth annual Forest Festival in 1953 was one for the ages. The monumental event celebrated the 100th anniversary of logging operations in Mason County, and a large sign carved into a piece of Douglas fir was permanently dedicated (the log sign still welcomes visitors to Shelton today). On the festival’s final day 30,000 people — about six times the regular population of the town — crowded into Shelton to watch the Paul Bunyan Parade through downtown.

The 1953 event was an early high point for the festival, but there have been many other great moments throughout the years. Continue below to see featured images from the FHS Archives documenting the long history of the Mason County Forest Festival. 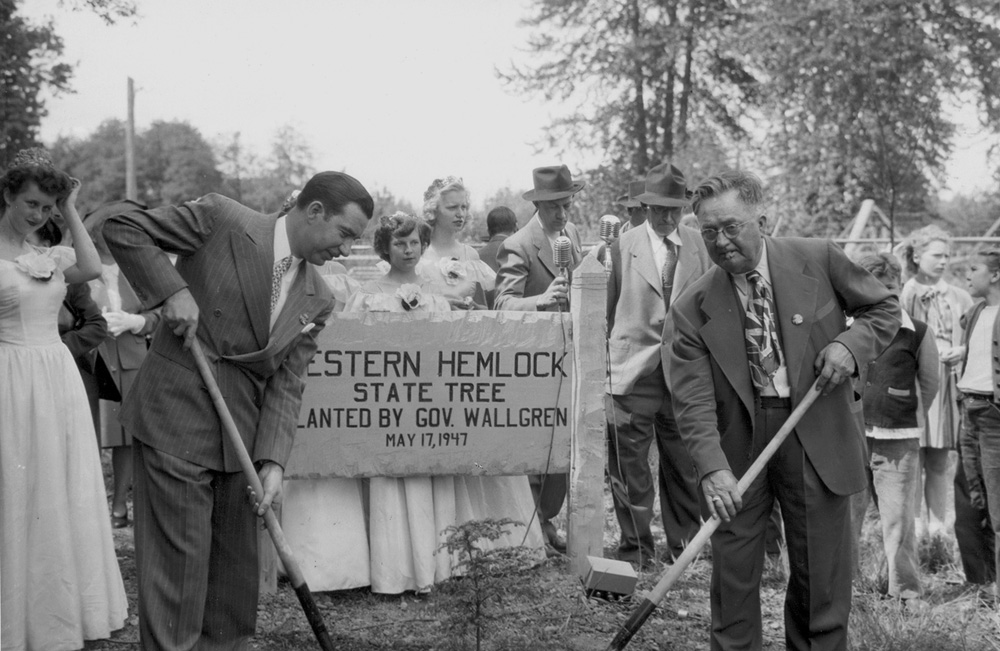 Festival Queen Bernadine Winiecki (far left) looks on as the state tree is planted during the 1947 Festival. 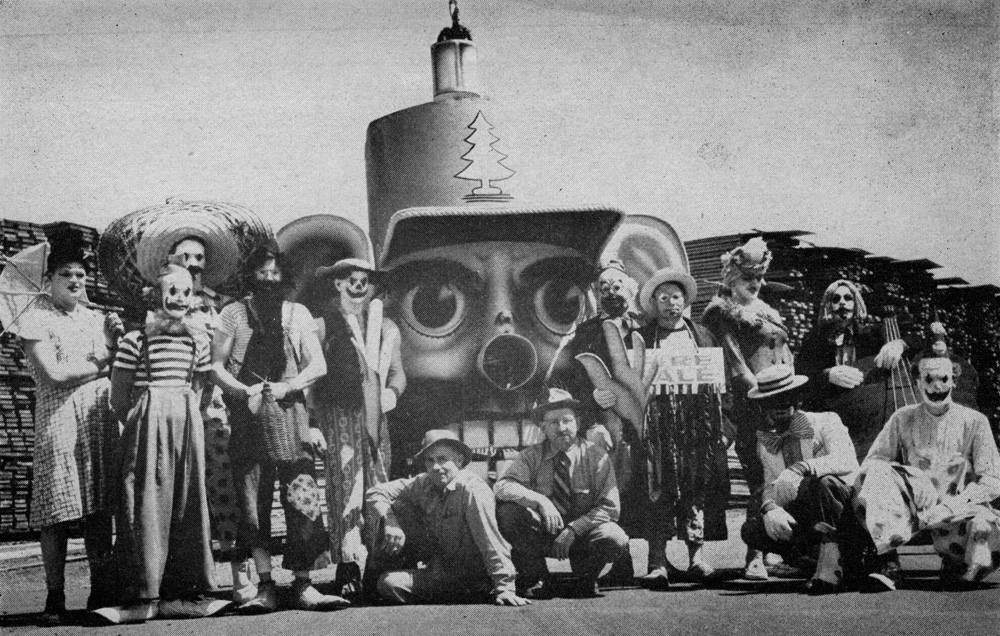 The Simpson Clowns gather around the “Robot Tree Planter” during the 1949 Festival. 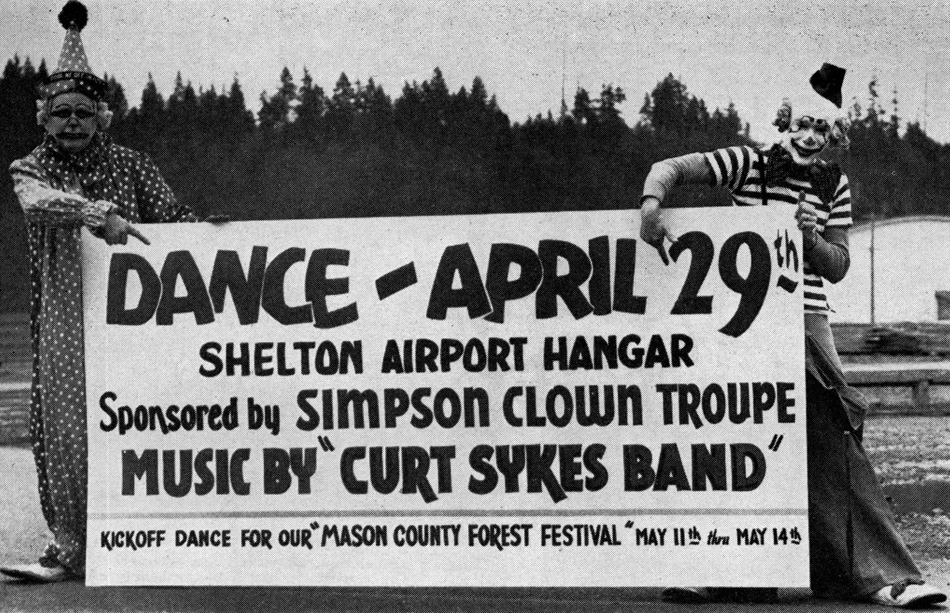 Simpson Clowns Tommy Thompson and Phil Durand invite you to the Kickoff Dance ahead of the 1950 Festival. 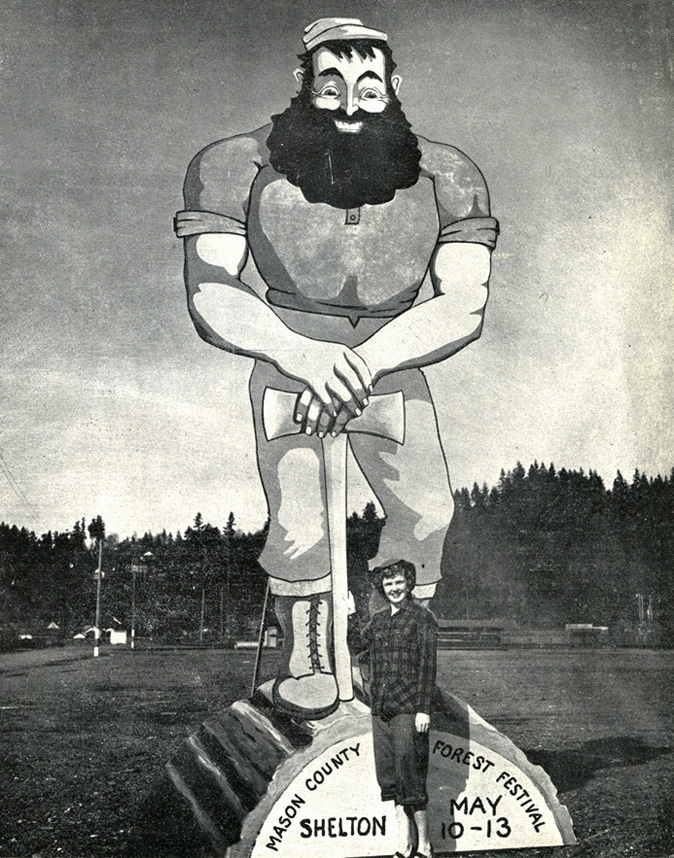 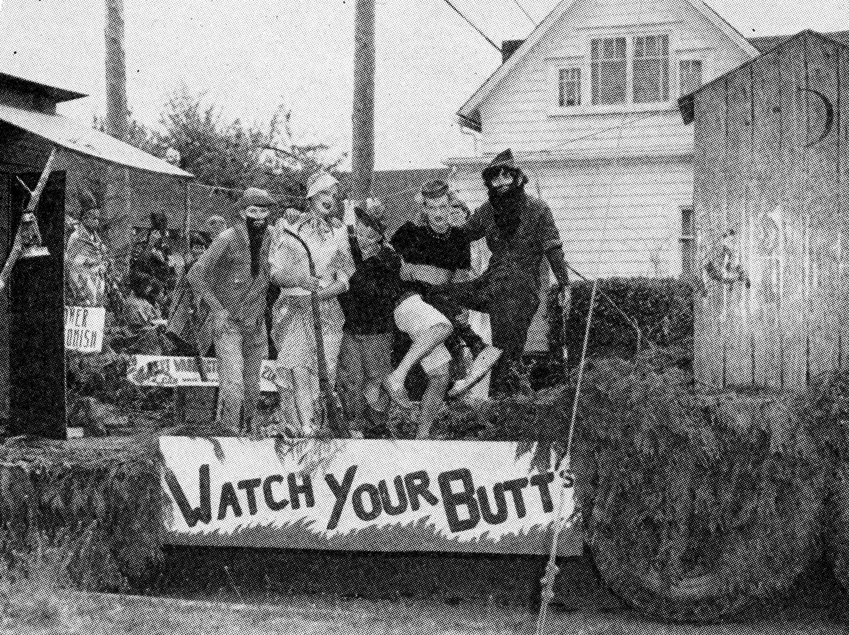 A unique fire prevention float in the 1952 parade. 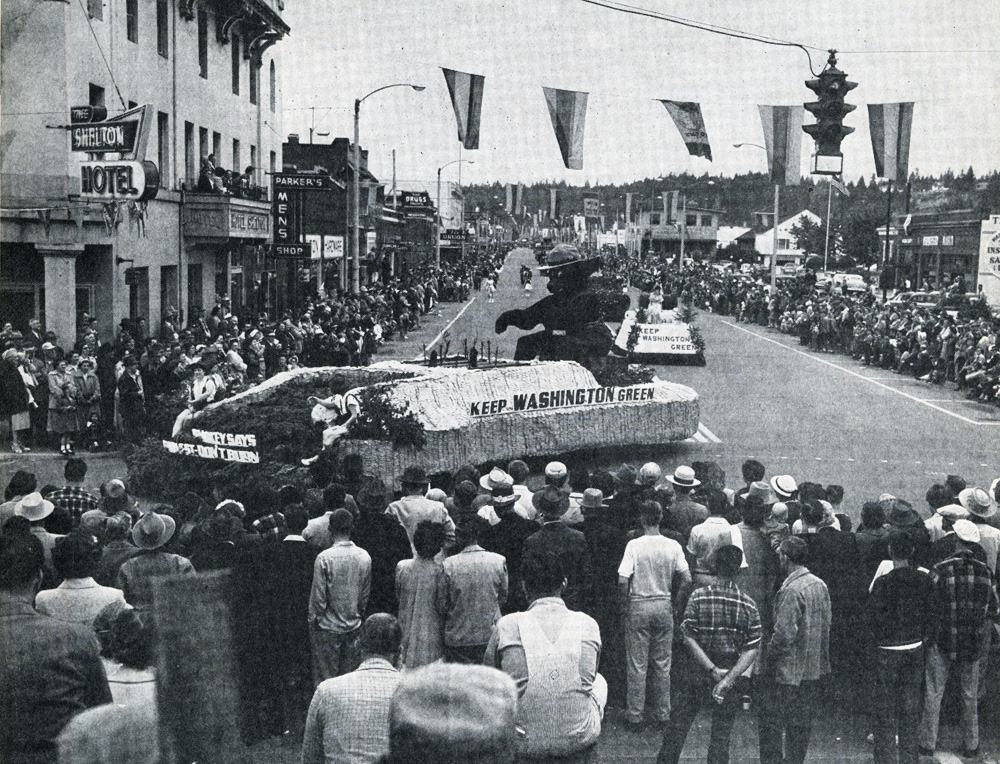 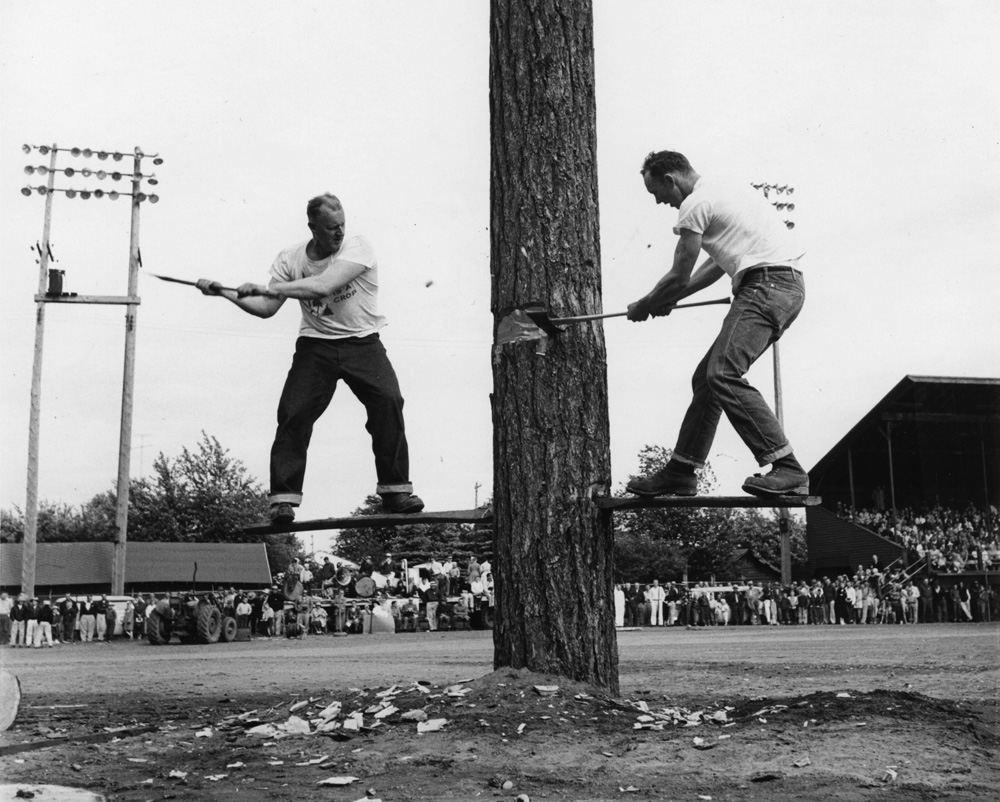 The legendary Paul Searls (left) and his son Max competing in the tree falling contest at the Loggers Sports Show during the 1956 Festival. 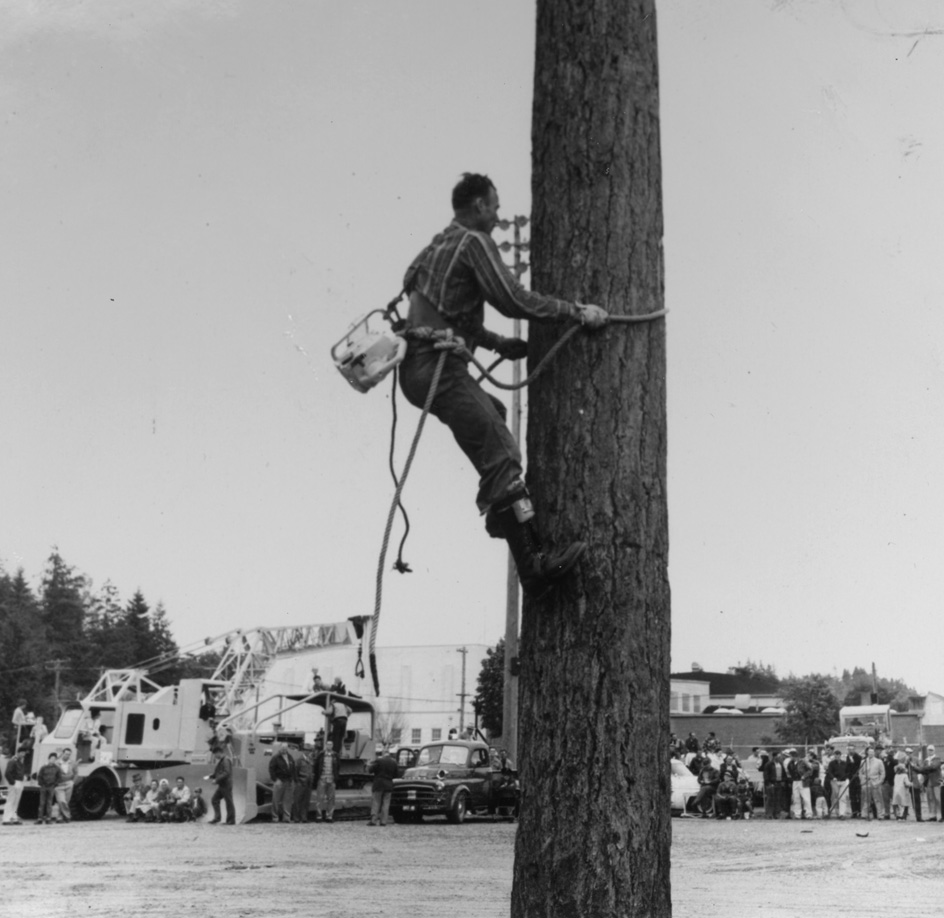 Karen Snelgrove, Queen of the 1956 Festival, with Clint Davis of the USFS.

Simpson Company float in the 1969 parade, which was the Festival’s 25th anniversary. 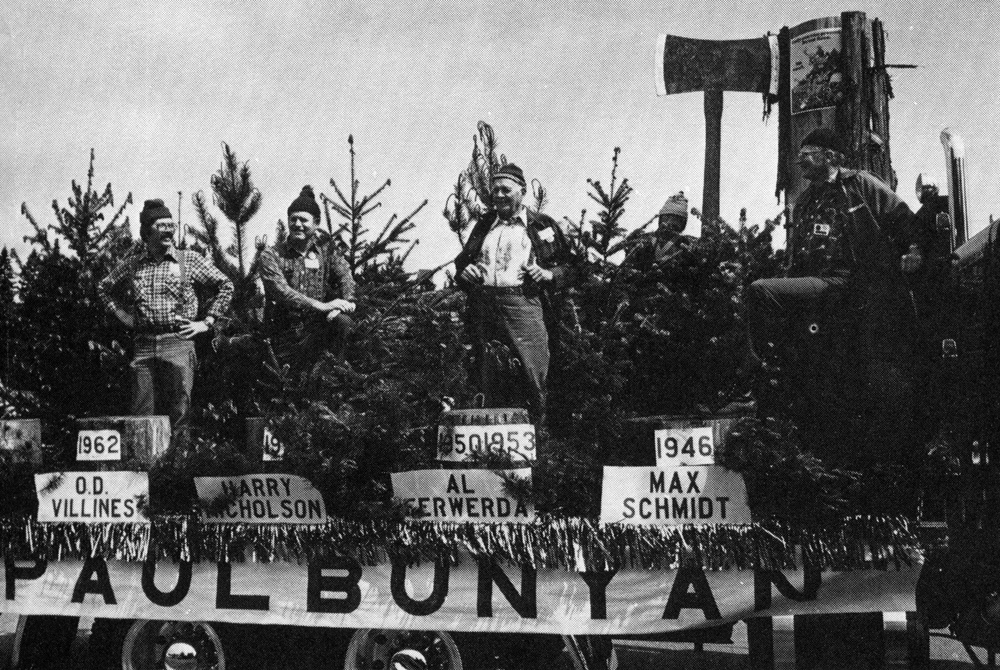 The 1981 parade featured the reunion of Paul Bunyans from Forest Festivals past.