Jack Ward Thomas and the Importance of Ethical Leadership

As the president of the Pinchot Institute for Conservation from 1995 to 2016, Alaric Sample worked closely with the U.S. Forest Service leadership, including Jack Ward Thomas, who served as chief from 1993 to 1996. He offers his reflections on Chief Thomas’ leadership style. 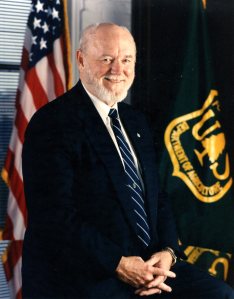 Jack Thomas’ formal chief’s portrait. A political appointee, he admitted he was uncomfortable in his role as chief.

As a veteran of many campfires, Jack Ward Thomas knew how to spin a good yarn. One story that he loved to tell involved an Army helicopter sent to transport him from a wildfire incident command center to an airport and back to Washington. As a young lieutenant scurried under the helicopter’s still-rotating blades to escort Jack, with his white hair whipping wildly in the prop wash, Jack noticed the four stars on the aircraft’s door. It had not taken long for the Army to ascertain the equivalent rank of the chief of the U.S. Forest Service.

“I see you brought the general’s chopper for me,” shouted Jack over the roar of the engines. “No, sir,” replied the lieutenant, “that’s your copter, sir.” Sensing an opening, the lieutenant asked, “Sir, permission to speak candidly, sir?” Bemused, Jack immediately answered, “Sure, son, what’s on your mind?” At sharp attention and with a crisp salute, the lieutenant stated, “Sir, you need a haircut, sir.”

Jack Ward Thomas never asked to be chief of the Forest Service. He didn’t seek the position, and he accepted it only reluctantly when it was offered. His wife Margaret was terminally ill with cancer at the time and he felt that his place was at home with her in La Grande, Oregon. It was only after her urging that he agreed, and he assumed the job after Margaret’s passing.

Jack was essentially drafted into the job by Vice President Al Gore following the 1993 Northwest Forest Summit. Jack had led a team of scientists and forest managers in the development of a range of planning options to protect the habitat of the northern spotted owl, with each option carrying a different probability of the species’ long-term viability. Facing questioning by the president of the United States, the vice president, and several members of President Clinton’s cabinet, Jack was just Jack. His responses to their carefully crafted questions were short, direct, and candid to the point of being blunt.

The politicos were smitten. “Why isn’t this guy chief of the Forest Service?” Gore asked. In a matter of a few weeks, Jack was on his way to Washington to serve as the 13th chief.

Being chief didn’t change Jack’s frank and direct style. To the employees of the Forest Service his basic policy admonition was “Tell the truth, and obey the law.” In the dozens of congressional hearings for which he was called to testify, he had little patience for politicians’ grandstanding, posturing, and theatrical attacks on the integrity of the men and women of the U.S. Forest Service—and he wasn’t shy about showing it. He bruised more than a few egos on the Hill, but it earned him the loyalty and admiration of the thousands of Forest Service scientists and land managers that he so capably and honestly represented.

So it was all the more poignant when toward the end of his tenure as chief in 1996, Jack stepped to the podium at one of the infamous 6 AM “Chief’s Breakfast” gatherings at the Society of American Foresters annual meeting, and opened with the words, “I’m here to apologize to all of you, because I’ve failed you.” In that large and crowded room, one could have heard a pin drop. “I know very well why I was brought in as chief,” he continued, “and since I had never managed more than a 20-person research team before, I knew it wasn’t because of my administrative skills.”

Jack felt he had been tapped at a critical juncture in the history of the Forest Service to be a visionary leader, to be someone who could effectuate a transformation of the agency and help restore its century-old reputation as the nation’s leading forest conservation organization. But in 1995, Congress had enacted a “timber salvage rider” to make salvage sales on the national forests immune from legal or administrative challenge. The rider was attached to an important and time-sensitive appropriations bill, and President Clinton felt compelled to sign it. Thus began a period of what many in the environmental community characterized as “logging without laws.” It was suspected that more than a few old timber sales that had been halted under the National Environmental Policy Act, the National Forest Management Act, or the Endangered Species Act were being repackaged as salvage sales and pushed ahead.

As a result, Jack observed, “every citizens group in the country had [Council of Environmental Quality director] Katy McGinty’s phone number on their speed dial.” Jack felt he had been expected to focus on the “blue sky,” the long-term, big-picture vision for the future of the national forests and the Forest Service. Instead he found himself summoned to the White House almost daily to personally review and approve or disapprove lists of individual salvage sales proposed under the terms of the timber salvage rider. And now, at the end of his term as chief, he felt he had never had the chance to articulate the inspiring vision that would carry this proud and capable agency into a successful future.

Presently the U.S. Forest Service is reviewing, evaluating, and revising the Northwest Forest Plan that Jack and the other members of the “Gang of Four” (and hundreds of agency staff) developed two decades ago. The changes taking place are a validation of the “adaptive management” approach they pioneered—taking actions, monitoring and evaluating the results, and then readjusting plans based on knowledge gained and “lessons learned.” The Forest Service and its multitude of stakeholders are gradually relinquishing their hold on old assumptions that forest ecosystems are stable and predictable, and embracing new models that acknowledge the variability of these ecosystems in response to human actions. Jack demonstrated that it was possible to provide strong and moral leadership, while still having the good sense to modify one’s prior views and adapt to new knowledge. His personal ethic became an organizational standard, and that will remain his legacy.

Jack served as chief of the Forest Service during three of the most tumultuous years in an agency whose century-long history is full of drama. As Jack mused near the end of his tenure, “Someone had to be the 13th chief, so I guess it was me.” In spite of his misgivings, Jack’s three years as chief were in fact a turning point for the agency. His unwavering commitment to ethical leadership was an inspiration to all who served under him or had the privilege of working with him. There are many young leaders in the Forest Service and beyond who benefit unknowingly from the high standard of professional integrity that Jack Ward Thomas demonstrated, even those who never had the privilege of reveling in one of Jack’s yarns around the campfire. 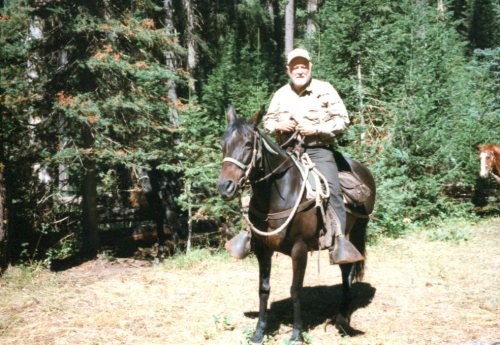 Jack Thomas on Shadow, in the Eagle Cap Wilderness, August 1996. He’d been going there for years with his friend Bill Brown while living in La Grande. After becoming chief, trips there provided escape from the pressures of the office. 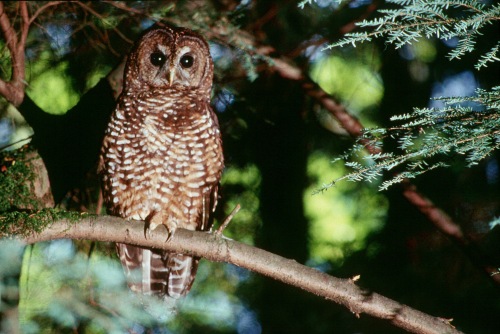 The northern spotted owl: the bird that changed American forest history, and the life of Jack Ward Thomas. (Photo by Tom Iraci, US Forest Service)

Al Sample is a president emeritus of the Pinchot Institute for Conservation. You can learn more about Thomas on the Forest History Society’s U.S. Forest Service History website or by visiting Jack’s own website. You can read about Jack’s time as chief in his own words in The Journals of a Forest Service Chief.