Everyone knows Smokey Bear, Woodsy Owl, and maybe even Ranger Rick Raccoon, but there are many other forest and forestry-related fictional characters that long ago fell by the wayside. Peeling Back the Bark's series on “Forgotten Characters from Forest History” continues with Part 18, in which we examine Rusty Scrapiron.

This year marks the 75th anniversary of Keep Oregon Green, a statewide fire prevention program formed in May 1941 by Oregon Governor Charles Sprague and 250 state leaders who sought to replicate a similar program started in Washington the previous year. The purpose of Keep Oregon Green was to get the general public to embrace forest fire prevention, and in the decades that followed a massive publicity effort blanketed the state. One key component of the Keep Green campaign was the artwork found on posters, illustrations in various publications, and other promotional items. In Oregon, the artist behind much of this was Hugh Hayes. 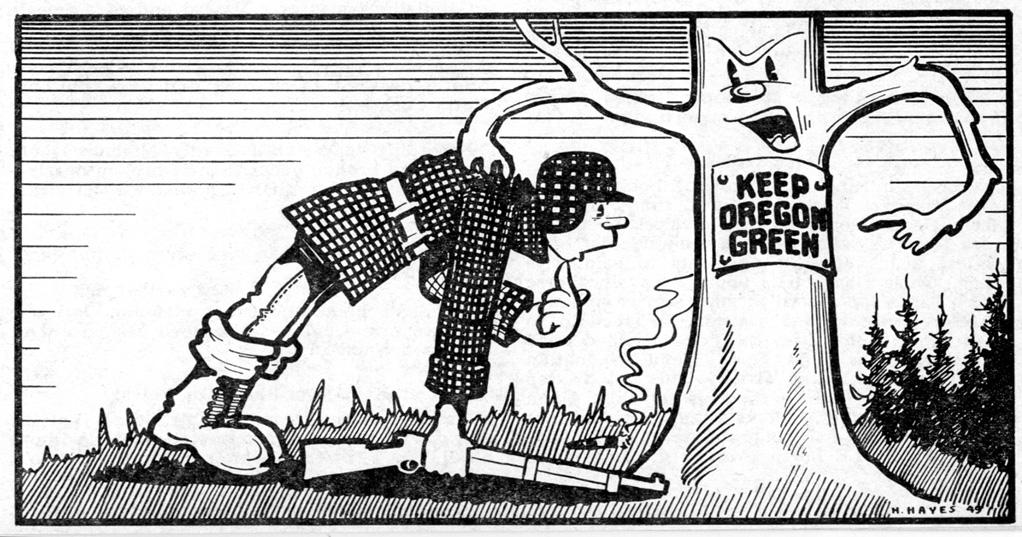 Hugh John Hayes Jr. dedicated his life’s work to Oregon’s forests. He worked with the Civilian Conservation Corps in eastern Oregon after high school, and then as a draftsman with the Oregon State Board of Forestry in Salem. Following service with the U.S. Army during World War II he worked for the Oregon State Department of Forestry from 1945 until his retirement in 1976. Throughout his long career Hayes drew countless illustrations, cartoons, maps, posters, architectural plans, field guides, and much more. 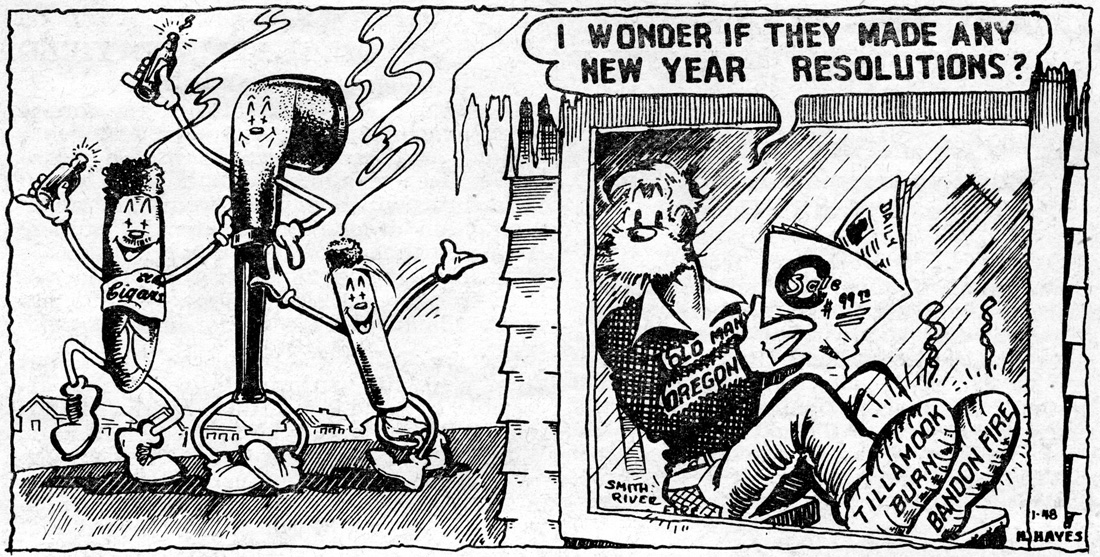 Hugh Hayes cartoon for The Forest Log from January 1948.

During the 1940s and 1950s, Hayes provided regular illustrations for The Forest Log, a monthly publication of the Oregon State Board of Forestry. Most of his illustrations for The Forest Log had a Keep Oregon Green tie-in or other general fire prevention message. In the May 1950 issue he debuted a new character: “Rusty Scrapiron.” Rusty made his entrance to the world in the final panel of Hayes’s May 1950 strip, literally being pulled into the frame by a reckless smoker who had unknowingly started a forest fire.

Rusty Scrapiron was a ranger and fire warden who battled careless hunters and other nuisances in defense of Oregon’s woods. Rusty’s adventures and humorous hijinks usually carried some sort of fire prevention message (even in a strip where he becomes a substitute baseball announcer, he is seen putting up a Keep Oregon Green sign in the first frame). Often he would be seen heroically battling wildfires, though with a touch of humor. At least one strip, however, dispensed with jokes altogether just to carry a fire warning about power saws.

Rusty’s character traits also seemed to deviate from strip to strip. While he usually outsmarted troublemakers, occasionally he was portrayed as dimwitted (like once mistaking his own pipe smoke for a fire). He also seemed to be somewhat short-tempered: strips sometimes ended in violence with Rusty knocking out careless smokers or pummeling men who dare denigrate his profession. Through it all though, Rusty’s heart was always in the right place as he adamantly and unapologetically defended Oregon’s forests.

The strip appeared monthly for nearly two years in The Forest Log, ending its run in March 1952 for unknown reasons. But Hayes’s work continued. He still provided periodic illustrations for The Forest Log and his influence over fire prevention efforts in the state endured for decades. Hayes is probably best known for the Keep Oregon Green place mat he created in 1959. This detailed, illustrated map documenting the history and culture of Oregon was widely distributed for use in restaurants throughout the state. Following his initial “retirement” in 1976, Hayes continued to do contract work for the Department of Forestry through 1993, including an illustration for the department’s 75th anniversary featured on the cover of Forest Log in 1986 (the inside cover included a photo of Hayes at work and a brief look back at his career).

Hayes passed away in 2013 at the age of 98, but his legacy lives on with the still active Keep Oregon Green organization. His Rusty Scrapiron creation – like other forgotten forestry characters – lives on here at the Forest History Society. Below are some of our favorite Rusty Scrapiron classic comic strips.