Everyone knows Smokey Bear, Woodsy Owl, and maybe even Ranger Rick Raccoon, but there are many other forest and forestry-related fictional characters that long ago fell by the wayside. Peeling Back the Bark's series on “Forgotten Characters from Forest History” continues with Part 14, in which we examine Abel Woodman.

"A Character is Coming to Crossett."

This was the headline on a small announcement item greeting scrupulous readers of the December 1947 issue of Forest Echoes. As our faithful Peeling Back the Barkers know, Forest Echoes was the popular local monthly magazine published by the Crossett Lumber Company of Crossett, Arkansas, between 1939 and 1962. But who was this new character being teased in the magazine's final issue of 1947? Curious readers were assured of an answer in the new year: "Don't miss next month's Forest Echoes, you owe it to yourself to meet this character."

As promised, the mysterious new character made his debut in the January 1948 issue. Found in a one-panel comic in the back of the magazine was a well-built man with beady eyes, smoking a pipe and holding a large axe. The man was dressed in traditional lumberjack garb (boots, suspenders, flannel shirt) and there was no doubt about his location—a large Crossett smokestack was visible in the background. 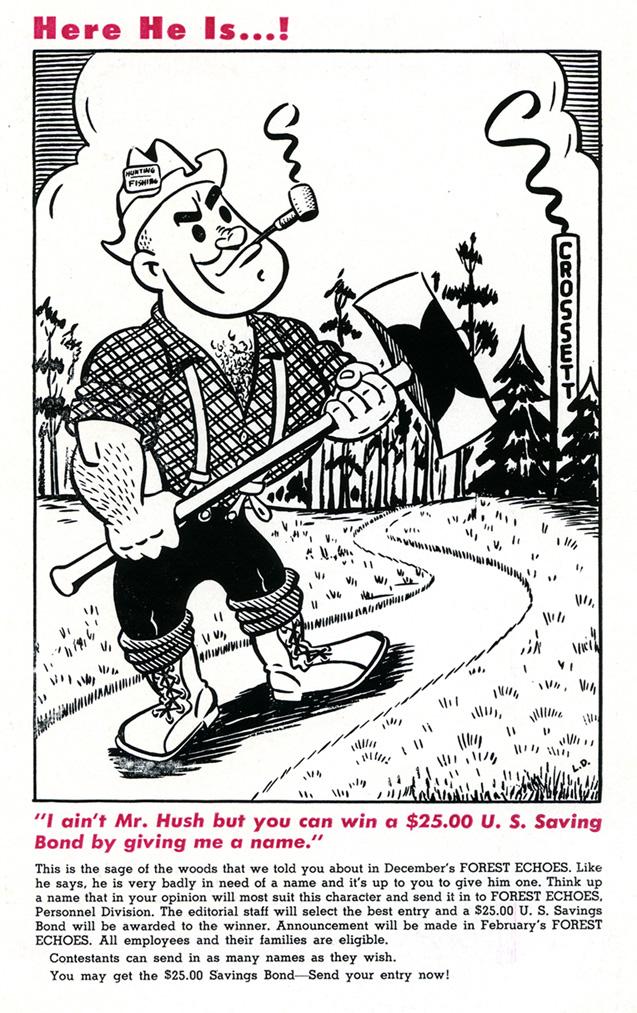 First-ever appearance of the man who would become Abel Woodman, January 1948.

The only problem was he had no name. To rectify this, the Forest Echoes editorial staff created a contest, inviting readers to submit their name ideas for the new character. As seen under the cartoon above, the best entry would win a $25 U.S. Savings Bond (side note: The "I ain't Mr. Hush..." comment references a famed 1946 contest on the Truth or Consequences radio game show, where host Ralph Edwards phoned random people and asked them to identify a mystery voice known only as "Mr. Hush").

The following month a winner was announced. Thanks to the entry of William "Bill" Preston Haisty, the new character was officially christened "Abel Woodman."

Abel Woodman immediately became a regular monthly feature of the magazine. At the back of every issue readers would find Abel delivering a message on forest conservation, job safety, or some other local topic, always in his own humorous way. Like the Forest Echoes publication itself, the Abel Woodman cartoon was a reflection of life in Crossett and Crossett's view of the world (in this case through the eyes of artist Lee Davis). Abel Woodman cartoons provided a unique commentary on issues specific to Crossett (a new town jail, Crossett High football, a redesigned company logo, the joys of Crossett bleached food board!) as well as more general concerns (taxes, the dangers of drinking and hunting, anxiety over the atomic bomb).

Abel remained a permanent fixture on the inside back cover until the final issue of Forest Echoes in June 1962 (the year Georgia-Pacific purchased the Crossett Lumber Company). For this fourteen-year run, the Abel comic was drawn by artist Lee Davis. In his final year Davis found a way to put himself in the action alongside Abel.

Davis did get help from the public along the way. In 1958 Forest Echoes held a "Cartoon Editor" contest, inviting the public to submit "a situation and appropriate remark for an Abel Woodman cartoon." Ten winners won $10 each and had their cartoon ideas drawn by Davis and printed. The first winning entry (from Lloyd Gardner) was published in March 1958, and is notable in that it foresaw "Moon Trees" a good thirteen years ahead of Stuart Roosa's journey into space. The final Abel Woodman cartoon ran in the last issue of Forest Echoes in June of 1962. His glory years seemingly already behind him, Abel had been reduced to company shill—touting the benefits of charcoal made by the Crossett Chemical Company. Despite this inauspicious end, Abel Woodman lives on in Crossett. In 2002 an "Abel Woodman" statue was erected in a small park in the middle of town. The original Abel Woodman also lives on here at FHS in our collection of Forest Echoes magazines, and our other materials documenting the history of the company town of Crossett, Arkansas.

Continue below to view a few more Abel cartoon classics.