With this opening act, the night of March 1, 1932, ushered in the sensational “crime of the century” — and, unexpectedly, wood forensics. 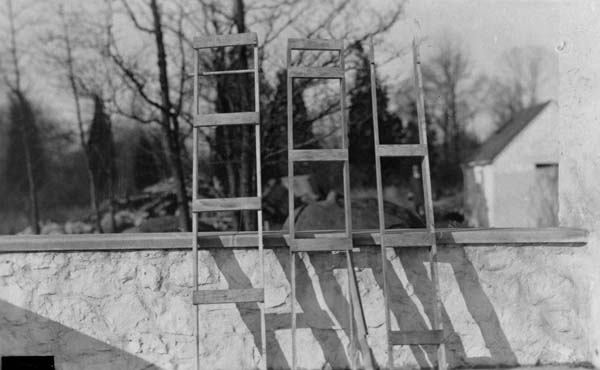 The ensuing search for baby Charles, Jr., turned up a ransom note on the windowsill of the nursery.  This kidnapping claim prompted the Lindberghs’ estate caretaker to contact the local authorities, who called the New Jersey State Police.  When the first state troopers arrived, they investigated the outside area of the house, particularly the ground below the second-story nursery window.  They found footprints in the wet ground, but neither measured nor made plaster casts of them.  Two deep impressions pointed to the use of a ladder, and a carpenter’s chisel laid nearby.  Widening the search, the investigators recovered a homemade ladder in three sections.  The bottom section was broken, presumably during the ascent or descent.  Within the nursery, no blood stains or fingerprints provided evidence.

LINDY’S BABY KIDNAPPED screamed the morning newspaper headlines.  Though the case did not fall under federal jurisdiction, the FBI was put on the case, increasing the high intrigue.   For months to follow, the public would be captivated and agitated by stories of the botched police investigation, a series of ransom notes, and thousands of (mis)leads.  The story of Little Lindy’s kidnapping aroused public interest; 38,000 letters arrived at the Lindbergh estate offering sympathy, prayers, and assistance.

Among these offers was a letter from Arthur Koehler, chief wood technologist at the Forest Products Laboratory in Madison, Wisconsin. Koehler’s particular research interest in the identification, cellular structure and growth of wood gave him the specific training and abilities for what he proposed to do: detect clues in the broken ladder.  His letter went unanswered.

Sadly, the fate of the young heir ultimately proved tragic.  On May 12, 1932, a child’s badly decomposed body was found four miles away from the Lindbergh home.  The state of decomposition indicated that the remains had been in the woods for months.  Based on distinctive overlapping toes on the right foot, the child was identified as Charles A. Lindbergh, Jr., and the cause of death was listed as a blow to the head.  Some surmise that Charles, Jr., had been dropped while being carried down the ladder, while others guess that the child was murdered in the nursery or shortly after the kidnapping.

Following this development, the investigation was marred by great frustration, the suicide of a maid then under suspicion and later deemed uninvolved, and instances of attempted fraud.  Eventually, attention returned to the  “wooden witness.”   Colonel H. Norman Schwarzkopf, Superintendent of the New Jersey State Police (and father to Stormin’ Norman), tried to trace the lumber in the ladder through local sources but conflicting opinions generated no useful leads.  In February 1933, he turned to the USDA Forest Service for a technical examination of the wood in the ladder.  The Chief Forester, R. Y. Stuart, referred the request to the Forest Products Laboratory, a federal laboratory that, in cooperation with the University of Wisconsin, conducted research on wood resources. 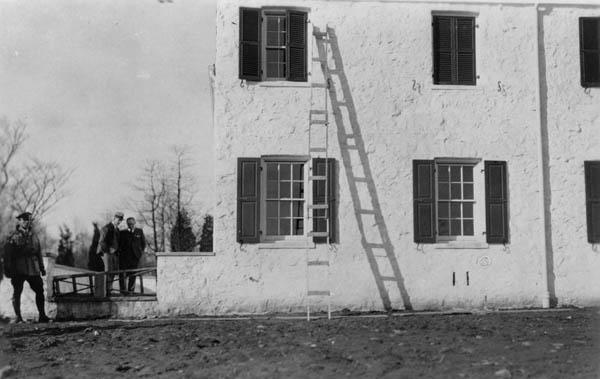 Selected for his background and interest in the case, Arthur Koehler journeyed to New Jersey to provide detailed analysis on the abandoned ladder.  Koehler’s efforts would be considered advanced even by today’s standards; for the early 1930s, his work was remarkable.  In an incredible game plan more expected from a modern-day CSI agent than a Depression-era lab researcher, he “surmised that if he could determine the exact characteristics of the planer used to mill the 1-inch by 4-inch by 14-foot board used for the rails, he’d have at least a toehold on the Lindbergh kidnapper” (Carlsen 219).

Through microscopic examination and general study, Koehler determined the number of knives in the heads that planed the sides, top, and bottom surfaces of the cut wood.  He found that one of the side heads had left distinctive marks and calculated that the heads rotated at 3,300 revolutions per minutes with an automatic feed mechanism rate of (an exact!) 258 feet per minute.  Collecting information about the growth rings and dimensions of the board, he produced a report and sent off inquiries to the 1,598 mills in the region that dealt with North Carolina pine.  Through a process of elimination, the pool was reduced to 25 mills, each of which submitted a planed one-by-four for comparison.

By means of the number of knives in the face and edge cutters, rate of feed, and impressions on the wooden ladder, Koehler determined that the lumber company M. G. & J. J. Dorn Company at McCormick, South Carolina, had milled the board.  Working through the evidence, he determined that the peculiar small marks must have developed between two successive sharpenings of the cutter blades and at no other time.  Comparing this time frame with the dates of shipments, Koehler generated a list of the probable lumberyards throughout the East that would have received Dorn stock.  Finally, in November 1933, a complete match between the ladder stock and single shipment to one yard produced the specific retail outlet: the National Lumber and Millwork Company in the Bronx.

Ten months later, Bruno Richard Hauptmann, a German-born carpenter, was arrested based on his possession of gold ransom certificates.  Handwriting and language analysis, his criminal background, and recent activities all combined to suggest his guilt.  Looking into Hauptmann’s movements, detectives learned that Hauptman had been employed at the lumber yard of the very Bronx outlet of Koehler’s findings, National Lumber and Millwork Company.  He had actually purchased lumber there less than a month after the receipt of the shipment in question, just two months before the March 1932 kidnapping.  Koehler had advised the investigators to seize the tool kit of any suspect, which proved forensically fruitful.

In Bruno Hauptmann’s subsequent trial, Koehler demonstrated for the jury that the hand-plane marks on the Lindbergh ladder matched the scorings made by the nicks and grooves of Hauptmann’s own plane.  His handsaw left the same kerf as those on parts of the ladder, and nails imprinted with the letter P were found in both the tool kit and the kidnapper’s ladder.  One of the defendant’s notebooks held a sketch of the very same ladder.

Two pieces of evidence sealed Hauptmann’s fate: a missing chisel and an attic floorboard.  The carpenter’s tool kit was missing a 3/4-inch chisel; it was determined that the chisel recovered from the crime scene was of identical make and pattern with a narrower one in Hauptmann’s set.  More dramatically, however, Koehler matched Rail 16 of the ladder with a sawed-off floorboard in the attic of Hauptmann’s apartment.  Wood comparison showed an exact match of the curvature, number, and width of growth rings.

Four square-cut nail holes provided damning evidence: “When the rail was repositioned as a floorboard and four nails were inserted into the holes, the size, spacing, angle, and depth of the nails fit exactly.  According to Koehler’s calculations, the chances of this exact set of circumstances occurring twice were one in 10 quadrillion.” (Carlsen 221)

The case against Hauptmann was circumstantial, yet jurors found the forensic science compelling.  On February 13, 1935, the jury returned a guilty verdict against the defendant.  On April 3, 1936, Bruno Richard Hauptmann was electrocuted for the murder of Charles A. Lindbergh, Jr.

Through the years, conspiracy theories and claims of miscarriage of justice have swirled around the case.  What remains definitive, however, is the case’s critical role in demonstrating the potential of forensic wood investigation.

In a 1935 radio interview, Koehler concluded,

…in all the years of my work, I have become convinced of the absolute reliability of the testimony of trees.  They carry in themselves the record of their history.  They show with absolute fidelity the progress of the years, storms, droughts, floods, injuries, and any human touch.  A tree never lies.  You cannot fake or make a tree.

**UPDATE: A version of this blog post was published in the Spring/Fall 2010 issue of Forest History Today: “CSI: Madison – Wooden Witness” by Amanda Ross.