The Continuing Odyssey of “The Forest Fire” Painting

The saga of how one of the most famous paintings of a forest fire was created and what happened to it resembles at times an international spy thriller. An article in Forest History Today (“Untamed Art,” Fall 2008) by historian Stephen J. Pyne tracked that mystery but had no ending because no one could say where the original painting then was. Nearly a decade later after the article appeared, he picked up the trail.

It’s the archetype globally for most prints, and probably most paintings, of a forest fire. But the reproductions come themselves from earlier reproductions. The original, Lesnoi pozhar, is a mammoth painting created by the Russian artist, A. K. Denisov-Uralsky, around 1900.

The story, briefly, is this. Alexei Kuz’mich Denisov-Uralsky was born in 1864 in Yekaterinburg, grew up in the family trade crafting displays of semi-precious stones, then moved into painting, particularly scenes from the Urals; for years he was the very epitome of a starving artist. He obsessed about painting fires on the landscape, from grass fires to crown fires. His breakthrough came in 1900 with an exhibit, “The Urals in Art,” in which he displayed his climactic effort, Lesnoi pozhar, or “The Forest Fire.” More triumphs followed. He agreed to contribute the massive painting (198 by 270 cm; 78 by 106 in.) to the Russian exhibit headed to the 1904 St. Louis World’s Fair.

The Russian pavilion, however, was dismantled shortly before the fair opened out of pique over American support for Japan in the Russo-Japanese War. Instead, the 600-piece exhibit was displayed on consignment to a Russian entrepreneur named Edward Grunwaldt. Denisov-Uralsky’s masterpiece won a silver medal and was reproduced in color by several newspapers under the title The Untamed Element. The reproductions were themselves reproduced, copy after copy, for advertising, fire prevention posters, calendars, and simply as prints. Reproductions appeared in silk tapestry and on porcelain teacups. (Today you can find reproductions on eBay or printed on items for sale on Etsy.)

Through various frauds and incompetence, virtually every piece of Russian art entrusted to Grunwaldt disappeared. The artists got nothing and heard nothing. Somehow Lesnoi pozhar ended up in the hands of Adolphus Busch, the beer magnate, who in 1926 hung it in the foyer of a hotel, The Adolphus, he was refurbishing in Dallas. In 1950 it was relocated to the hospitality room of the Anheuser-Busch Brewery in St. Louis. Then, in 1979, for reasons that are still murky, August Busch decided to donate the painting to the U.S. government, which, through the vehicle of the National Endowment for the Humanities, repatriated it to the Soviet Union. Ambassador Anatoly Dobrynin alluded to plans to send it to a museum in the Urals. In fact, it had again vanished. 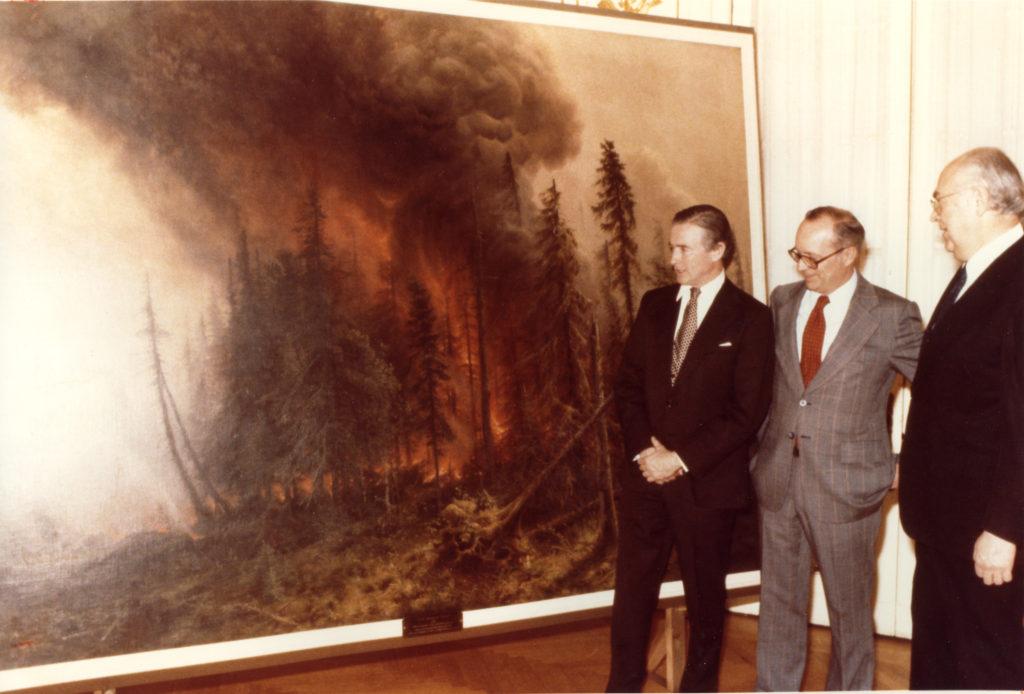 The original during the repatriation ceremony in 1979. From left to right: James Symington, a former congressman from Missouri, who assisted in arranging the hand-over; Joseph Duffy, director of the National Endowment for the Humanities, who acted as an intermediary agent between the Busch family and the government of the USSR; and Anatoly Dobrynin, Soviet ambassador. (Courtesy Robert Williams)

In 2014 the Yekaterinburg Museum of Fine Arts hosted a major exhibition on Alexei Kuz’mich Denisov-Uralsky, on the occasion of the 150th anniversary of his birth. It tracked down many of his fire paintings, but was unable to locate Lesnoi pozhar. The Russian embassy in Washington, D.C., refused to comment. No art or political authority in Russia knew where it had gone. Months after the exhibit had ended, however, word came that the fugitive painting may have been located in the basement of a museum in Tomsk. A photograph and measured dimensions suggest that it is in fact the elusive original. As yet no one has positively identified it nor restored it, but the curator of the Yekaterinburg exhibit, Ludmila Budrina, is confident this is the original.1 It seems Lesnoi pozhar has passed yet another way station on its long odyssey homeward.

Stephen J. Pyne is the author of numerous books on the history of wildfire around the world. His most recent publications are Between Two Fires: A Fire History of Contemporary America and its accompanying series “To The Last Smoke.” An excerpt from Between Two Fires is available in FHS’s magazine Spring 2017 edition of Forest History Today.

One response to “The Continuing Odyssey of “The Forest Fire” Painting”