Capitalizing on the excitement surrounding the Apollo space program and the first Moon landing on July 20, 1969, the Weyerhaeuser Company published an article in its company magazine that December. “Spacemen become Woodsmen” recounted the visit by four Apollo astronauts to its Millicoma Tree Farm property the previous year for an elk hunting trip. You can read that article here. Field and Stream ran an article by Herb Williams, the photographer on the trip, in its August 1969 issue. He most likely wrote the Weyerhaeuser one.

This post is written in that same spirit of celebration on the eve of the 50th anniversary of the Apollo 11 landing, and in the style of Tom Wolfe’s classic book on the space program, The Right Stuff, as an homage. 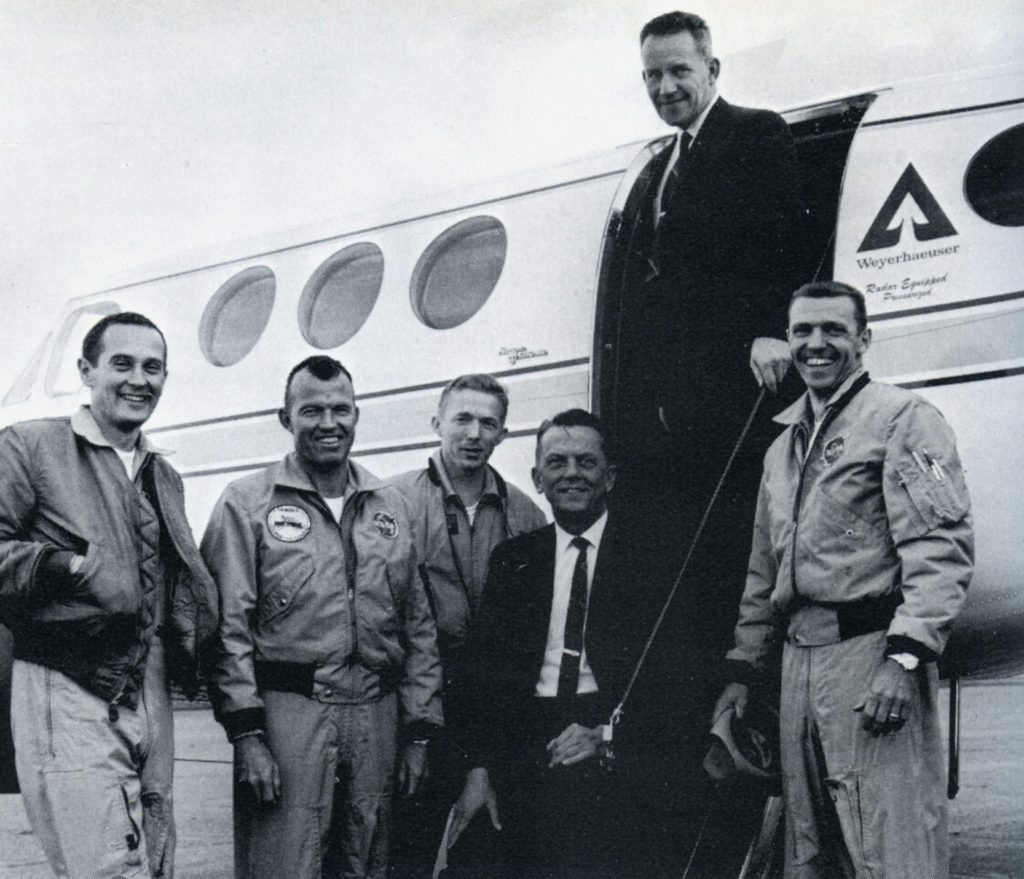 It was one of the goodies that one got from being an astronaut. The boys had been spending ten to twelve hours a day training for the greatest mission of their lives, putting their hides on the line to beat the Russians to the Moon. Now, for three days in the damp, cool, Pacific Northwest in the fall of 1968, was a chance to cut loose, to test their mettle in a way they rarely got to, to see if any of the four had that unspoken thing in a very different combat arena. It was man versus nature, to be sure. Man versus beast, more precisely. But this beast didn’t spew fire from its belly and hurl them into space. It walked on four legs, moved quietly through the woods, completely indifferent to the four revered men in their midst while grazing on young fir seedlings. They were just four of as many as five thousand hunters swarming the 210,000 acres of the Weyerhaeuser Company’s Millicoma Tree Farm that the Roosevelt elk called home. The bull elk that astronaut Stuart Roosa—his “eyes sharpened by space training”! No one had told him of that goodie, that perk of the job when he signed on in 1966 with eighteen other brave lads, including two others on the hunt, Charlie Duke and Joe Engle—had spotted through his binoculars had no concept of such numbers; it did not know that that morning’s dawn brought with it the first day of hunting season. It just knew that where the loud machines had removed trees and men had planted more, the resulting fir seedlings with their tender tops made for good browse. It did not know its benefactor would be its butcher.

Moving through the early morning light as the fog started breaking up, “Stu”—while in camp he was just one of the guys, as were the other three astronauts, including “Gordo” Cooper, the only man among them to have flown in space, now rubbing elbows with the Oregon businessman who put together the trip and the woodsmen who guided each of them—hoped to bag his quarry. Stu felt comfortable in the woods. Fifteen years before, he had spent a summer parachuting into the woods of Oregon and California to fight forest fires as a Forest Service smokejumper. And before the nation would celebrate its bicentennial, his name would become forever associated with trees. When he went to the Moon in 1970, he carried a collection of seeds—including Douglas fir, the very species they were now walking through and climbing over while stalking elk—that he’d bring back and the Forest Service would grow and plant all over the world. But his partner-guide Ovie Coleman—the logging foreman for Weyerhaeuser in this damp, cool, wondrous place; the one with the experience of untold years in these woods and sawdust in his veins; the one whose familiarity with this rugged land and their ungulate opponent was deeper and more intimate than that of his new friend’s with his command module’s switches, dials, and lights; the one who’s name would be lost to history if not for the reporter-photographer there to document for his employer the astronauts’ “Mission: Elk” adventure; the one who would never slip the surly bonds of Earth or his ordinary existence but could go to his grave holding this one great moment in his mind—he caught a break. The elk herd turned, putting the prey in Ovie’s cross-hairs. Looking through the rifle scope with his ordinary eyes, he squeezed off a shot. He had felled his target. The season was only minutes old, the reporter-photographer would record, and already the hunt was a success. Ovie had his first elk of the season, the first for this group. Stu—the test pilot, the astronaut, the single combat warrior with eyesight sharpened by space training!—was the one who stood in awe. “This is amazing! Shooting an elk before daylight. I just can’t get over it.” The Woodsman had outdone—outlucked—the Spaceman.

It would happen again later that same day, when Bob Perkins, Oregon businessman-turned-camp cook, heard shots being fired from nearby in the campsite. He ran out of the cook tent, picked up his rifle, and stood, stock still, next to his friends, who had just unloaded their rifles while failing to hit their target. Bob fired three shots at an elk some 200 yards away down the hill, besting his brethren and his national hero friends. Two bagged on the first day by the locals.

This trip came about because Bob and another businessmen from Coos Bay had grown curious after hearing about the astronauts training on the lava beds in central Oregon. He and Phil Waters checked it out, and the next thing they knew, they were swapping stories with astronauts over cocktails. Not long before the Millicoma trip, Bob had just come back from the Cape, after the Apollo 7 crew had invited him to come watch their launch. He and Phil returned the favor, issuing invitations to come west for some hunting—a call to a friend at Weyerhaeuser secured everything they needed, including a flight for the boys on the company plane from Portland down to Coos Bay, along with the gear, the food, and the guides. All of them were family men—a common bond between these men from disparate backgrounds. As was a love of country, and of hunting. Bob would later give a shotgun that had been passed down in his family to Stu to give to his son, Chris, so that the boy could learn to appreciate hunting, guns, and the outdoors, as he had done with his own children. Hunting had brought not just these men together, but the other five thousand around them. America in miniature, one of them would later say. The melting pot around the campfire. They could set aside their differences—after all, two of the Weyerhaeuser men frequently faced off across the table from one another to dispute labor issues as part of their day jobs—and find common ground in hunting. Yes, they were unified by hunting. That and wanting to beat the Russians to the Moon.

After the initial meeting at the lava beds, a group of businessmen from Coos Bay quickly put together three hunting trips in Oregon for groups of astronauts, including this one, which probably didn’t cost their idols anything but the time it took to get there and the time away from their families. A free hunting trip was just another goodie. They were still doing all this on a military officer’s salary. Gordo had fought for them to get jet fighters so they could keep earning their flight pay, keep up their skills. How can we be America’s greatest pilot if we aren’t flying? Gotta keep up the proficiency!

Their wives wouldn’t mind if the boys were gone for another weekend, would they? asked Bob and Phil. No problem. Flying from Houston up to Portland will keep us sharp. Another weekend away, well, that was part of the compact between the wives and their astronaut husbands. Everyone wanted to spend time with them, let a little of that greatness rub off on them. Especially with Gordo, who’d flown the last Mercury mission. When the capsule started overheating and he had to end the flight early, he brought it back safely while enduring cabin temperatures pushing 130 degrees. And then he defied the technological demons yet again during the Gemini 5 flight, when a computer error miscalculated the Earth’s rotation and sent him and Pete Conrad off course just as a hurricane was bearing down on the landing site. Gordo caught the problem in time to make adjustments and get them closer to their target area.

Here was a man who had shown he had the right stuff. Twice! Gordo! He’d been to space! Twice! He was as cool as they come. He was so relaxed on the Launchpad he’d fallen asleep while waiting for the white coats to light the candle. He raced cars and speedboats to unwind. He’d been all set for the 24 hours at Daytona endurance race in January of 1968 when, the night before the starting flag dropped, the brass at NASA ordered him to withdraw due to concerns about his safety. His wisecrack about NASA wanting astronauts to be tiddlywinks players, made in a moment of frustration to the press—no longer the Victorian Gent willing to protect the astronauts, like in the Mercury days—well, that had pretty much grounded him, clipped his astronaut wings, as it were. After that incident, Gordo only served in backup roles. He would never fly an Apollo mission. Charlie Duke would be the only one of the four to walk on the Moon. Stu would get to the Moon first, but as Apollo 14’s command module pilot, he never set foot on the surface. That was in the future. Stu and Charlie and Joe all looked up to Gordo. During the hunt, he showed why they did, when he split off from his guide to pursue an elk. Darkness descended, and the woodsmen got worried. The steep mountainous terrain could be unforgiving, even to a local with intimate knowledge of it. Stu and Charlie and Joe didn’t worry. Gordo had been in worse situations. You didn’t get to the top of the invisible ziggurat, become one of America’s greatest pilots, by panicking. Besides, they said, Gordo had undergone extensive survival training during his Mercury days and knew what to do in any field conditions. Soon enough, he emerged from the forest, empty-handed—except for a story about how he wasn’t worried because of his survival training.

Joe Engle had been up there, too, up in space, but he’d done so while piloting the experimental X-15 aircraft. Three times he’d been to space by flying higher than the required altitude of 50 miles, making him the only one of this bunch to have earned his astronaut wings by piloting a craft from the ground to space and back again. But that’s not what the public wanted to hear about, not what got you the goodies. Gordo knew that. Logging 220 hours in orbit burnished your halo and made you a hero, the idol of men and the desired object of women—the astronaut groupies, the cookies. At least the wives knew that during this trip the only cookies the boys would get their hands on would come from the camp tent, wrapped in wax paper.