The Night the Mountain Fell

“The night the mountain fell” is how one of the strongest earthquakes to rock the United States was remembered by some survivors. It wasn’t in California, though. It hit Montana. An earthquake with a magnitude of 7.2 centered on the Gallatin National Forest—about 40 miles northwest of Old Faithful Geyser in Yellowstone National Park—struck at 11:37 pm on August 17, 1959. Coming at the height of tourist season, and in the middle of the night, the earthquake could have killed hundreds. 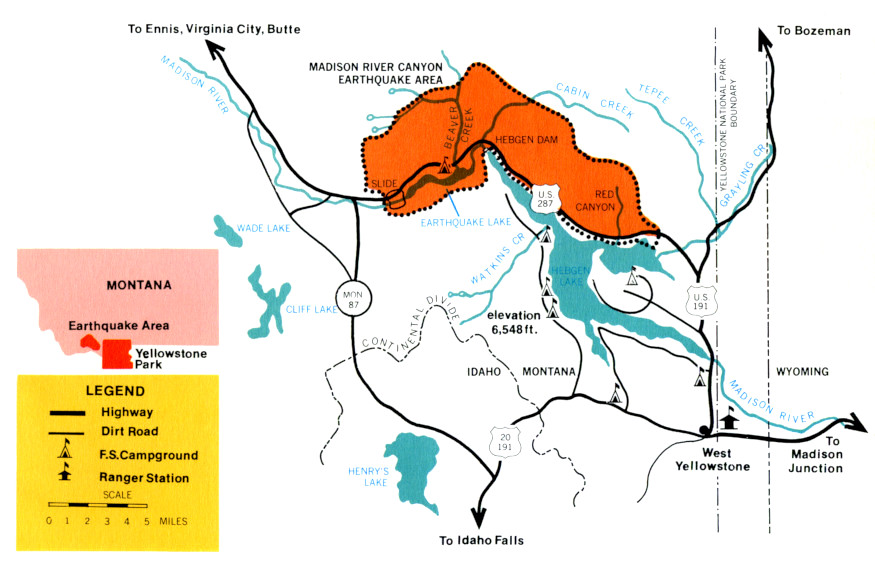 The tremors sent gigantic tidal waves surging back and forth within the 7-mile length of Hebgen Lake, launching water over the top of the dam—not once but three times—at the northwestern end. Fortunately, the dam held. However, the wall of water that washed over the dam went rushing down the narrow Madison Canyon, a popular fishing and camping area. The water swept past three Forest Service campgrounds and numerous dude ranches as the unsuspecting were stirring awake after being shaken.

As the water raced toward the mouth of the canyon seven miles away, half of a 7,600-ft.-high mountain gave way from the earthquake. An estimated 80 million tons of rock slid down and across the canyon and up the other side, creating a natural dam that instantly formed what is now called Earthquake Lake. The new lake measured 175 feet deep and extended nearly back to the dam just three weeks after forming. By comparison, Hegben Lake, formed in 1915 when the dam was built, was less than 100 feet deep at the time. 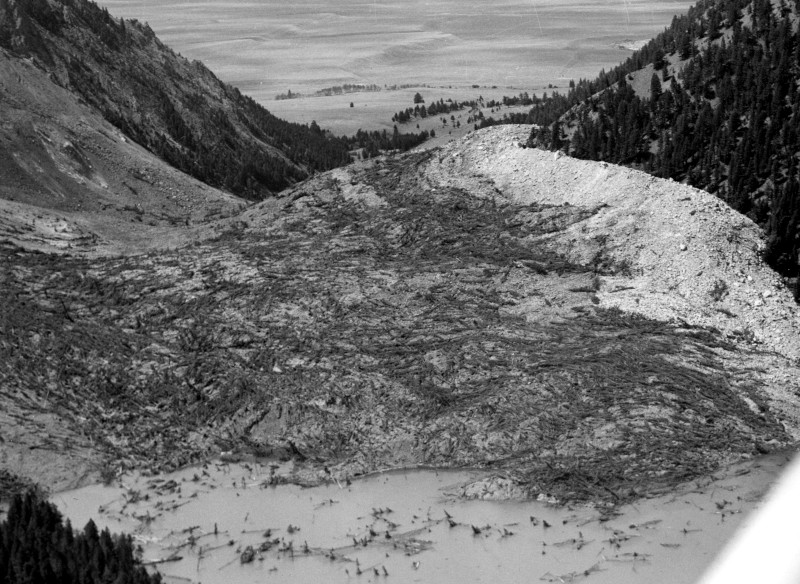 Aerial view of the huge rock slide at Rock Creek Camp area looking southwest towards the mouth of the canyon and flats beyond.

The water hit the rock slide, forcing it back up into Rock Creek Campground where it overwhelmed its disoriented occupants. The rock slide also generated high winds. The wind and water flung people and cars and trailers about as if they were toys. Nearly two dozen people died in the landslide alone; about 250 people were trapped in the canyon because roads leading out had collapsed and fallen into the lake. At other campgrounds in and outside the park frightened people ran from their tents, while at nearby Yellowstone National Park, visitors were shaken out of their beds in Yellowstone Lodge. By coincidence, two geological parties were there mapping the area when it struck. Two of them published their accounts and findings about the earthquake in the professional news magazine GeoTimes not more than two months later.

Rescue operations commenced the morning after the quake hit under the direction of the U.S. Forest Service. Smokejumpers parachuted in to give first aid and establish communications, while military personnel and federal, state, and local authorities and others came in on foot, horseback, and even helicopters to conduct search-and-rescue work and evacuate hundreds under difficult, trying conditions. Operations wrapped up on August 21. In all, the Madison River landslide killed 28 people.

One year later, the U.S. Forest Service dedicated a memorial to those lost in the Hebgen Lake Earthquake. True to its multiple-use mission, the agency had printed interpretive guide booklets as early as the 1961 vacation season to direct visitors as they came to view the site. Those guides and other materials documenting the disaster are in the U.S. Forest Service History Reference Collection. The photos are from the John Clark Hunt Papers. Below is a sampling of materials. 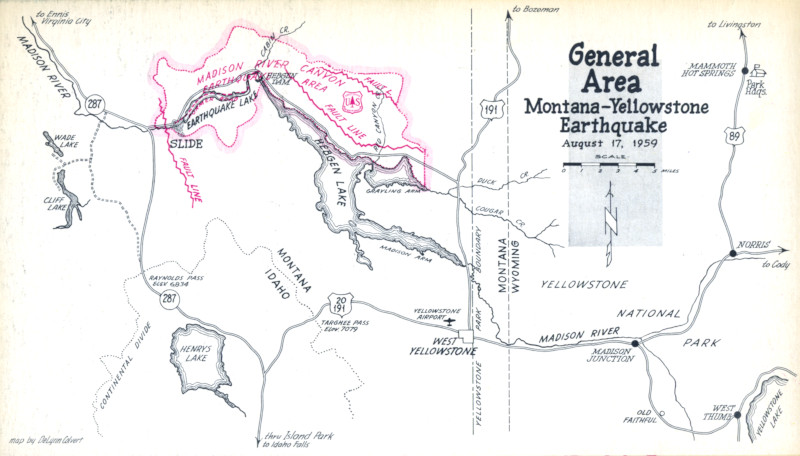 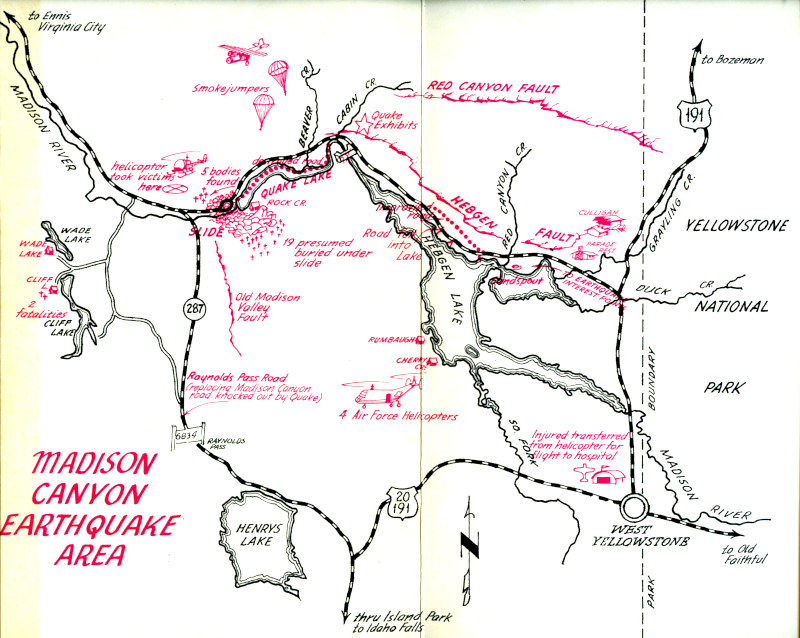 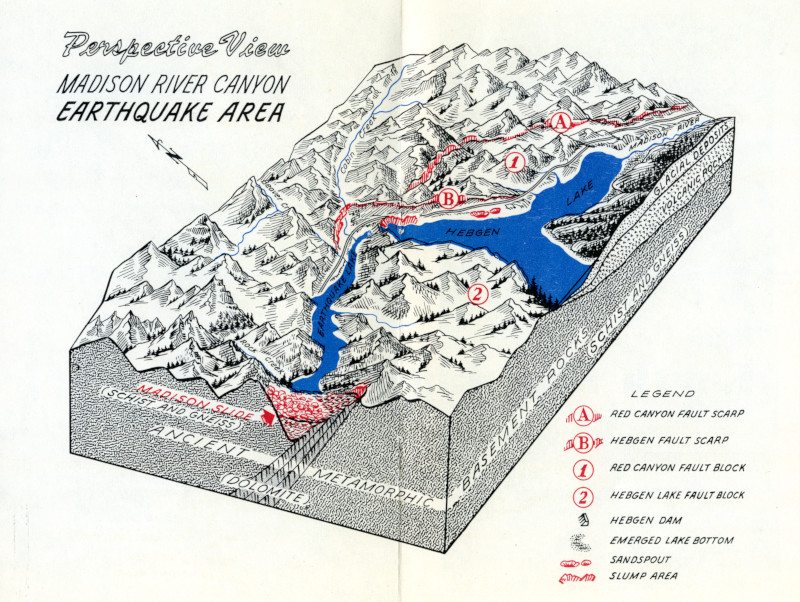 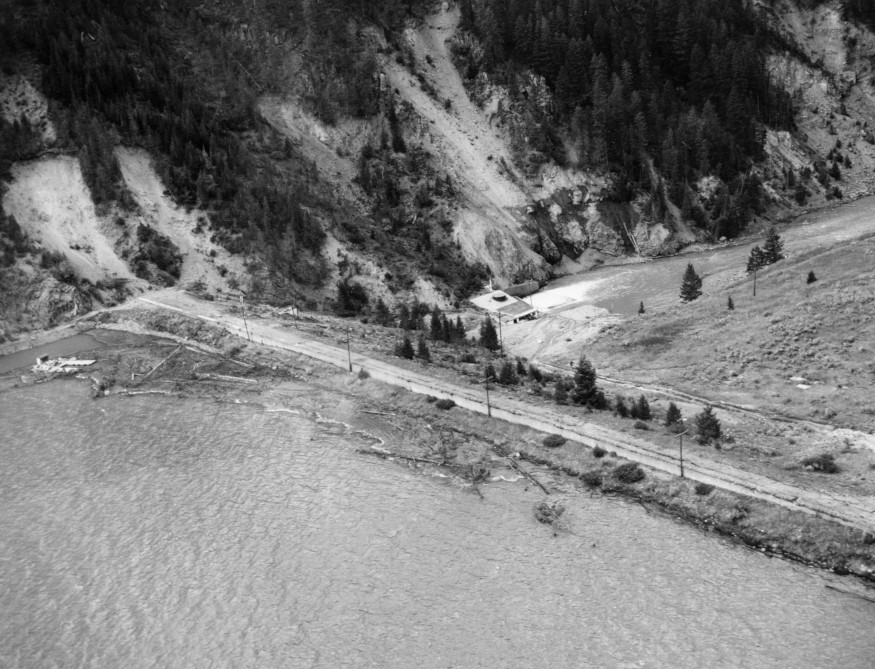 Hebgen Dam is shown battered and bruised but still intact in this aerial view following the earthquake. 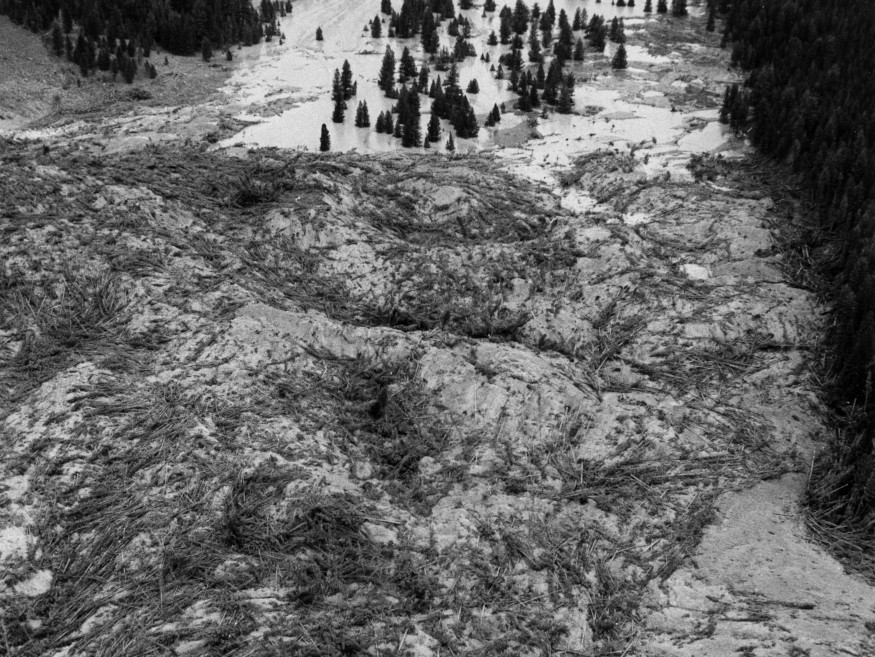 A close aerial view of the slide showing timber and debris on top of the rock. The wave-like action of the slide is evident in this photo. Toward the top of photo is the “Earthquake Lake” being formed from the waters of Madison River. 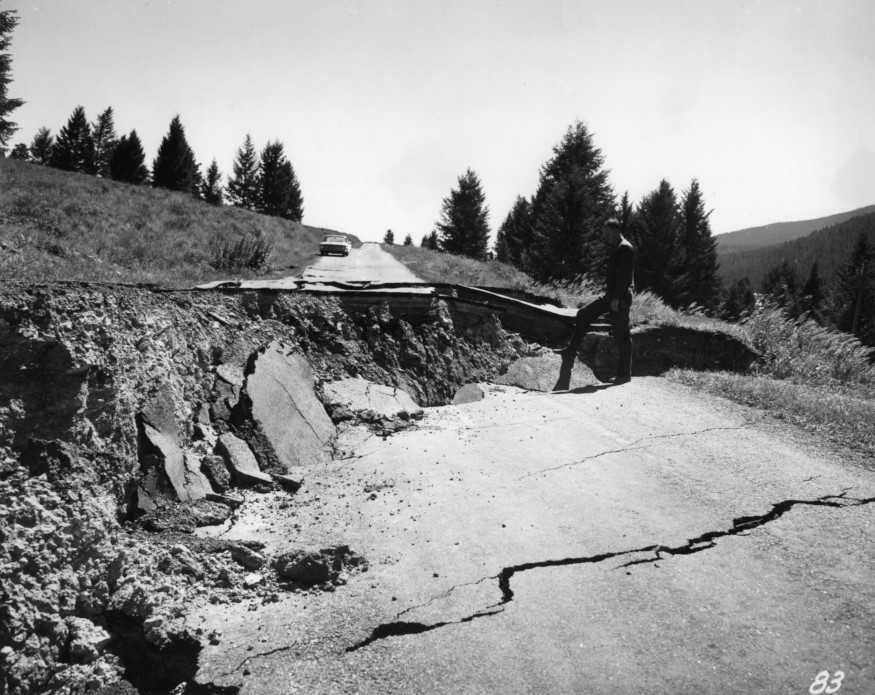 Fault across Montana State Highway No. 1 along Hebgen Lake. 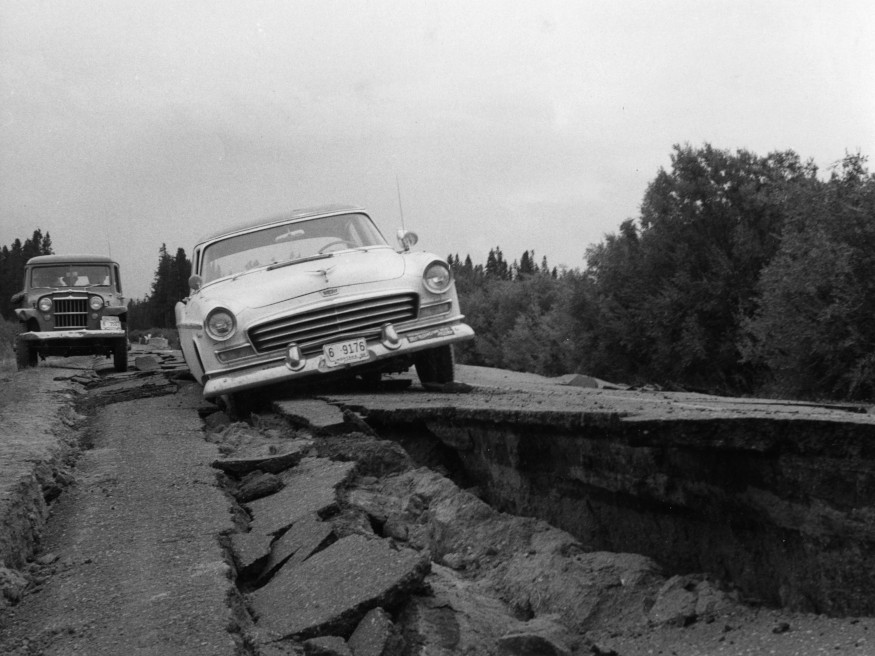 Highways in the vicinity of the southwestern Montana earthquake looked like this in many places the next morning. Much of the ground in this area sank several feet. 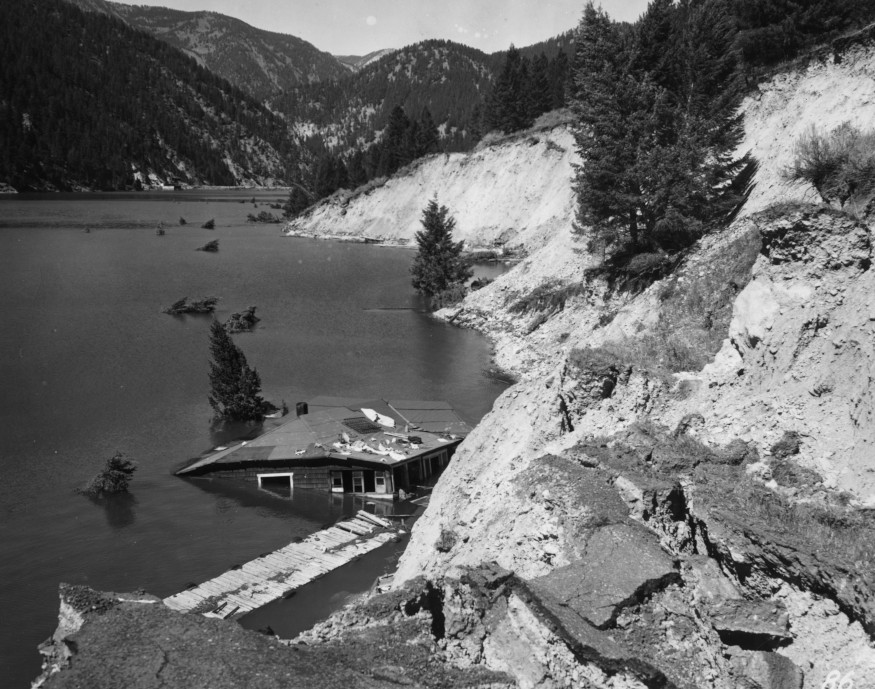 Submerged house in Hebgen Lake. Approximately one-fourth of a mile of Montana State Highway No. 1 slid into the lake. 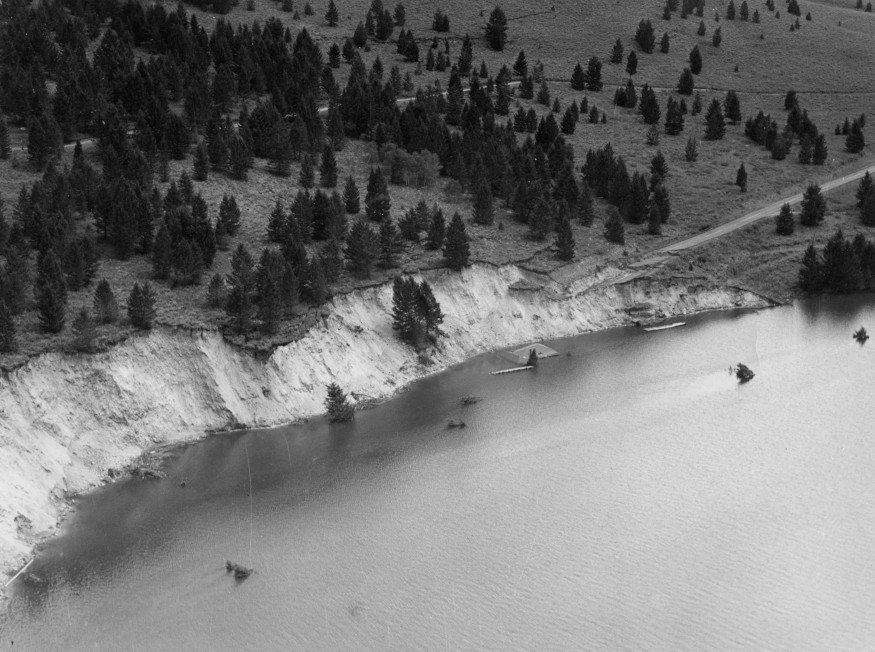 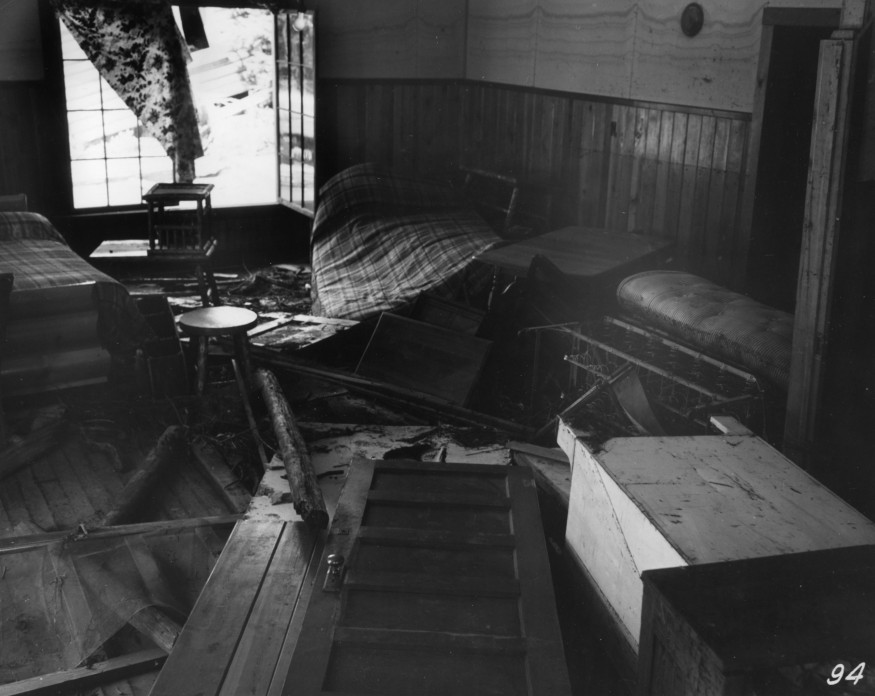 Shambles inside of summer cottage on east shore of Hebgen Lake following earthquake. 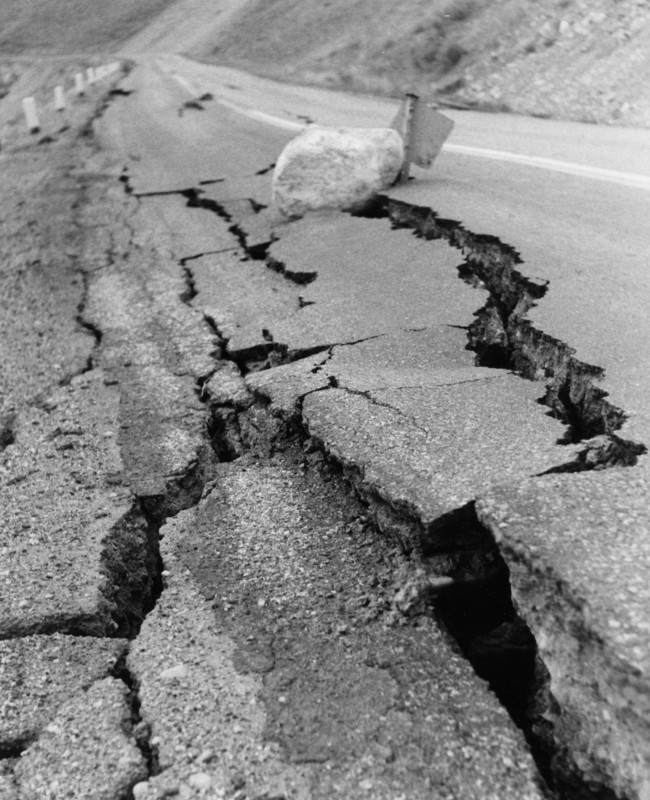 Large boulders crashed onto the highway and gigantic cracks appeared on the roads as the quake hit. 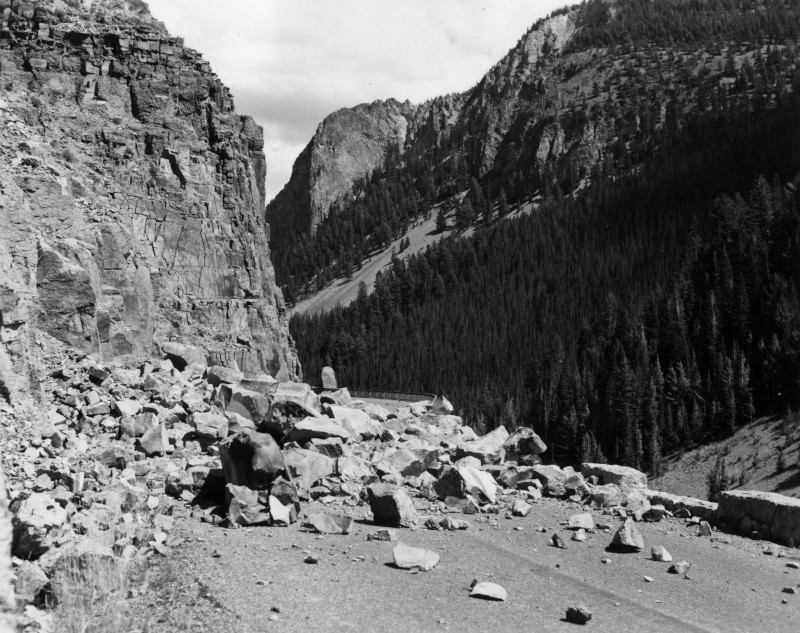 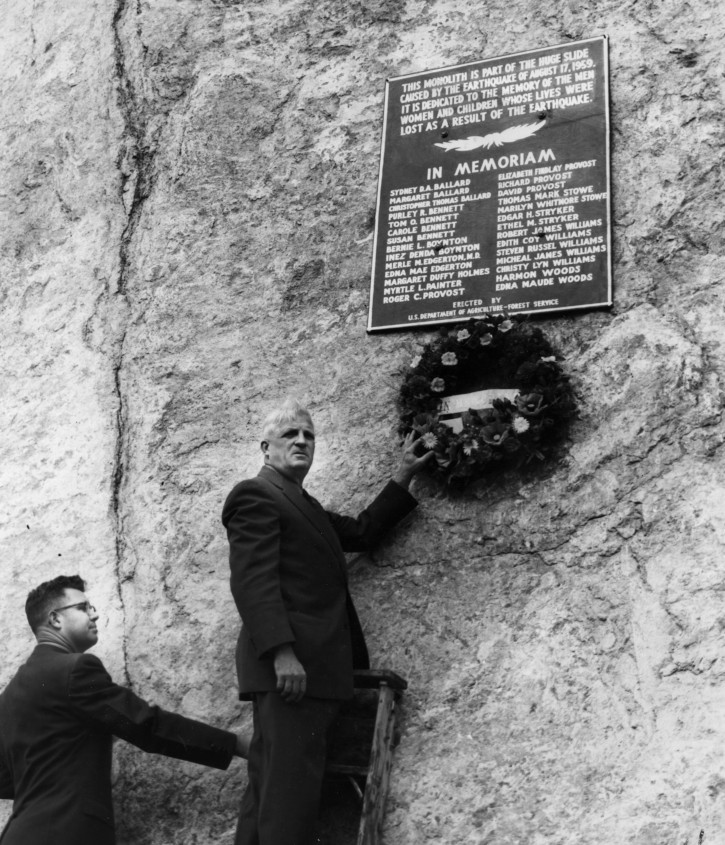 George Duvendack, supervisor of the Gallatin National Forest, places a memorial wreath on a huge monolith on top of the slides. Ranger Silvernale assists. 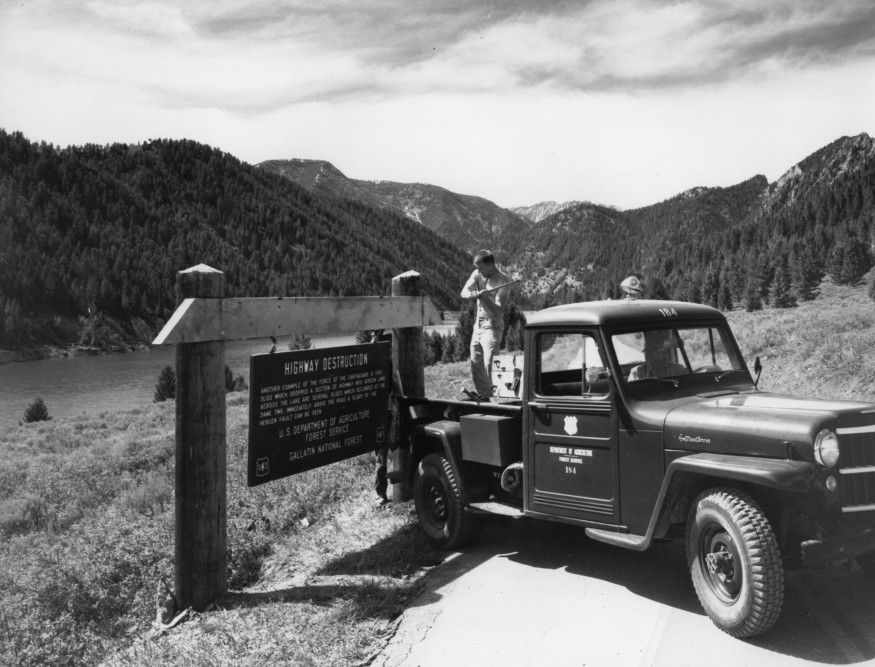 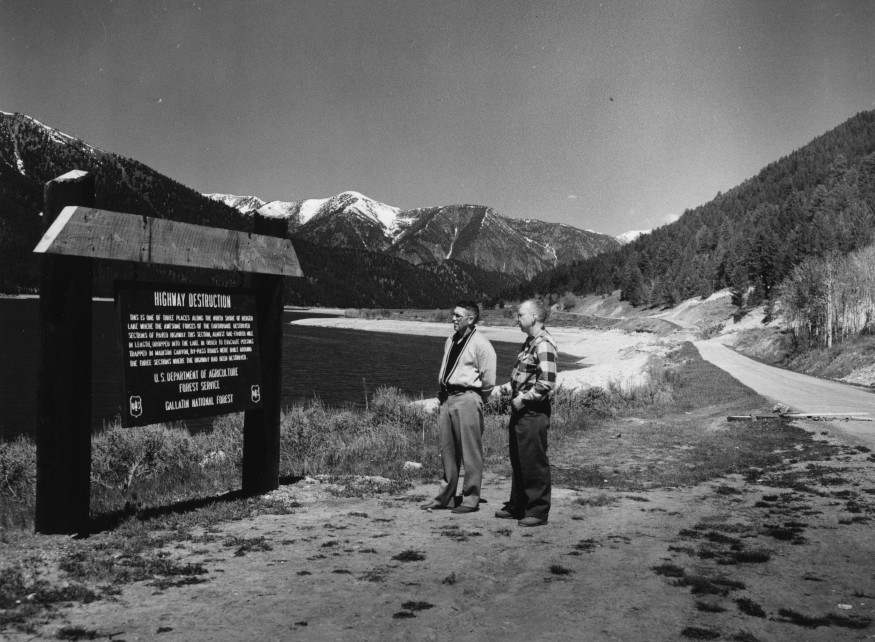 Information signs were placed throughout the Madison River Canyon Earthquake area. Here visitors view one of the highway destruction signs on the north side of Hebgen Lake. 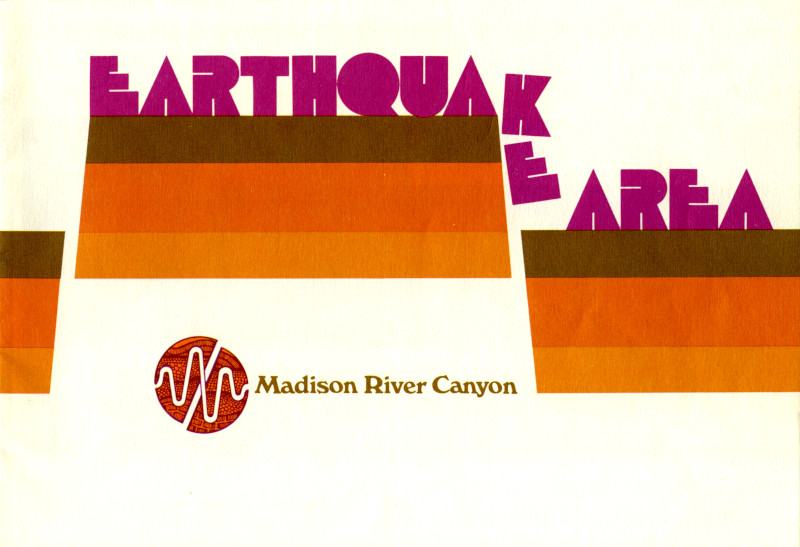 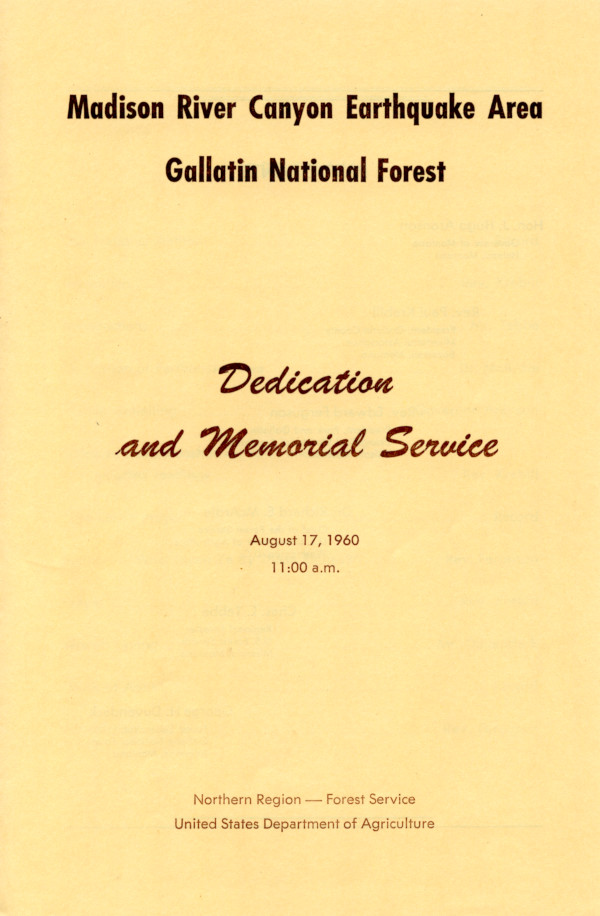 One year after the earthquake, a dedication and memorial service was held (click image to view full program).