In 1898 Forest Service Rangers roamed the mountainous terrain of the Flathead at a salary of $60 per month. They had to supply their own horses, bedrolls, and subsistence out of this pay.

One of the chief requirements of old-time Rangers was that they be exceptional woodsmen. The Ranger's principal jobs were clearing trails and patrolling for fires. Work assignments often took him away from civilization for months at a time. He had to be a rugged individual.

Increases in the needs and uses of our natural resources require that the present-day Ranger and his assistants be more than just good woodsmen. They must be experts in all phases of forest management.

Statistics from 1898 to 1964 show that the Flathead is a progressive National Forest.

Thirty-six sawmills and four plywood plants now operate in this area, compared to three small sawmills in 1898. In 1953, there were only 20 mills.

Practically all timber cutting in the Flathead prior to 1907 was in that part of the Forest now within Glacier National Park. Most of this timber was used for fuel and the construction of homes near Lake McDonald. 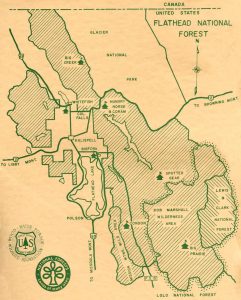 The first major timber sale on National Forest land was in 1913. Somers Lumber Company purchased a large block of timber near the head of Swan Lake. This sale created radical changes in local logging methods, camp accommodations, and equipment. Railroad logging equipment was barged across Flathead Lake from Somers, hauled overland to the foot of Swan Lake, and barged across the lake to the sale area. Nearly 90 million board feet of timber was cut in this sale. Horses and oxen were used to skid logs before this railroad equipment was brought in.

Strong emphasis was not placed on fire protection until 1909, when eight Ranger Districts were formed. Each Ranger was allotted a three-man fire protection crew. This was thought to be large enough to adequately handle any fire situation. Unfortunately, no one had anticipated the devastating 1910 fire season, when the Forest Service realized the need for an expanded and improved protection force.

Lookout towers and buildings were soon built. By 1939, there were 147 lookout structures on mountain peaks around the Flathead.

The use of aircraft in fire detection dates from 1929 in the Flathead. Aircraft have been so effective in fire detection that the number of manned lookouts has been reduced to 21. Airplanes and helicopters also play an important role in fire suppression; they rush men, equipment, and retardant to threatening fires.

The Flathead National Forest's only telephone line in 1910 was from Kalispell to the Spotted Bear Ranger Station, approximately 45 air miles. By 1939, the Forest Service had constructed 4,450 miles of trails and 1,675 miles of telephone line.

Road construction and the introduction of radio communications eliminated the need for many trails and telephone lines. As late as 1939 there was only 275 miles of Forest Service roadways in the Flathead. Today, there are 1,658 miles of National Forest roads and highways, 2,825 miles of trails, 590 miles of telephone line, and 223 radio sets on the Flathead.

These improvements have played a major role in reducing fire damage. Sixty-seven fires in 1929 destroyed more than 65 thousand acres of timbered National Forest land. Thirty-four years later, in 1963, the damage from 118 fires was held to 1,372 acres.

Work crews increased as the Forest developed. There were 19 year-long and 200 seasonal employees on the payroll in 1939; by 1954 the number of year-long workers was 39 with 250 summer employees. Presently, 121 persons work the year around. Peak employment in 1963 was 386, excluding firefighters.

Improved access to the Forest increased the need for recreational facilities. The number and size of campgrounds and picnic areas are gradually increasing. In the Flathead there are 247 family units capable of accommodating 1,285 persons at one time at 22 locations.

Reforestation of burned and cutover land is becoming more important each year as mature timber is harvested from the Flathead's forested slopes. The first trees were planted in the Flathead in 1909 at Essex as an experiment. A concentrated effort has been made in this field since 1938. A total of 297,000 seedlings were planted on 655 acres of logged-over land.

Foresters are improving the productivity of trees to increase the growth rate. In 1963, a total of 1,375 acres of seedlings and sapling-sized trees in the Flathead were thinned.

Logging slash must be disposed of after each timber harvest to reduce insect, disease, and fire hazards. Several thousand cutover acres of land are prepared each year for burning. This work is done by hand and with bulldozers.

The Flathead National Forest has an interesting history. Many colorful personalities—too numerous to list—have had an active part in shaping the proud National Forest organization of today.

A brief review of some facts and dates gives some understanding of the development of this area.

1809—David Thompson, of the Northwest Trading Company, was the first white man to enter the Flathead country, in 1809. About 1811 he established a trading post near the present site of Kalispell.

Captain Lewis of the Lewis and Clark Expedition viewed Marias Pass in 1806 from the Plains near Browning. Lewis named the Marias River. The Lewis and Clark party did not enter the Flathead country. However, it had long been rumored that this low pass existed. The first men to cross 5,216-foot Marias Pass were Finan McDonald, Michel Bourdeaux, and Baptiste Bucher. They crossed from the west in 1810 with a band of Flathead Indians.

1865—Charles McLean, George Dayton, and William Lugrave traveled through this area in 1865, en route from the Kootenai country to Helena. There were no permanent white settlers in the valley at that time. They reported the only white man they saw was a man named McLaren who ran the Selish Trading Post on Ashley Creek for the Hudson Bay Company. Charles McLean passed this way again 2 years later and reported no white settlers.

Old buildings on the slight rise just north of the present Forest Service Bigfork administrative site are the remains of an old trading post which dates back to early times as a supply center for the community. The late John C. Eckleberry, who died in 1950, remembered a visit to this trading post with his father about 1870, when the young Eckleberry was 12 years old. This place was later known as the late Jimmie Devine's place; it is now the property of the Bigfork Hotel, Inc. The trading post buildings are now badly deteriorated and will soon pass into oblivion.

Arthur Whitney provided this information about the trading post.

1872—Col. Sievers, U.S. Army, made a trip through the South Fork of the Flathead River in the early 1870's, perhaps as early as 1874. The party was seeking a route for a railroad into this area. They killed an elk at Mud Lake for camp meat. This was the first report of elk in the Flathead country.

1879—Who the first permanent white settler was has not been fully determined. Nick Moon settled along Ashley Creek near Kalispell in 1879. Joe Ashley also settled near Ashley Creek, but no date of his arrival could be established. One account credits a man named Ryden, who lived near the "Point of Rocks" near Olney, as being the first white settler. It is not known if this was before 1879.

1884—The first lumber mill in the Flathead was constructed at Foy's Lake. Known as Foy's Mill, it was operated by waterpower. Logs were skidded into the lake with bulls and oxen and rafted to the mill. It had a capacity of 10,000 board feet per day.

1897—The Lewis and Clark Forest Reserve was established by President Grover Cleveland. Flathead National Forest was a segment of this huge reserve.

1898—W. J. Brenner was the first Supervisor of what is now the Flathead National Forest. He was appointed by President McKinley. The area for which he was responsible included the North Fork and what is now Glacier National Park. Gust Moser was Supervisor of the southern portion.

1898—Thomas Danaher and A. B. McCrea established homesteads in the upper basin of the South Fork of the Flathead River.

1900—The John O'Brien Lumber Company constructed a mill at Somers. It had a yearly capacity of 40 million board feet. Logs were driven down the Stillwater and Flathead Rivers to Bigfork, Montana, where they were caught in a boom and towed to Somers. Logs from the Pleasant Valley area were shipped to the O'Brien mill by railroad. The mill was later owned by the Great Northern Railway Company and was operated under the name of the Somers Lumber Company.

1902—Frank Liebig built the first Ranger Station at Cedar Creek, near the foot of Lake McDonald.

1903—The first constructed Forest Service trail extended from Ovando to the Danaher Basin, a distance of 21 miles.

1905—Flathead National Forest headquarters were moved from Ovando to one room in the Conrad Bank Building in Kalispell. Rent was $10 per month, including heat. Supervisor Page S. Bunker asked for a clerk to remain in the office during his absence. He preferred a man who could use a typewriter.

1907—The name "Forest Reserve" was changed to "National Forest."

1908—The Lewis and Clark National Forest was divided into two National Forests: Blackfeet and the Flathead. Forest Service crews constructed the first telephone line; the line went from Kalispell and Coram. 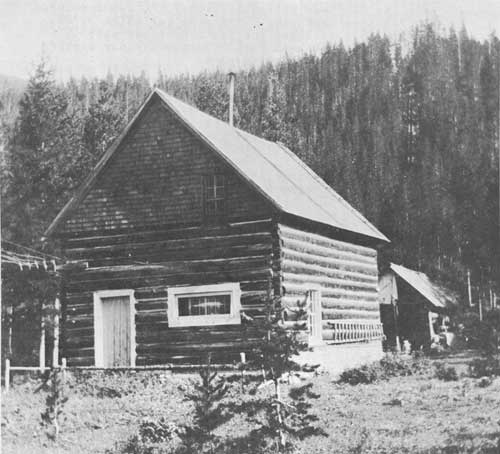 Three Forks cabin, built in 1910 by Allen Calbick. The lumber was whip-sawed on the site. This photo was taken in 1928.

1909—The main line of the Great Northern railroad was pulled out of Kalispell and routed through Whitefish and Eureka.

1914—Lookout was constructed on Spotted Bear Mountain. It was used as an observation tower until it was replaced in 1933.

1925—Forest Rangers A. E. Hutchinson, Roy Hutchinson, and Al Austin found the frozen body of a hermit trapper named Marshall in his cabin on Cabin Creek, in the South Fork drainage. Marshall had ended his life with a pistol. He had been dead for more than a month when the Rangers discovered his body in February. They made a sled and hauled the frozen corpse 35 miles over the snow-covered mountains to Ovando.

1931—The last river drive of logs on the Flathead was made down the North Fork River.

1939—First air drop of a Flathead National Forest fire camp was made in the Bunker Creek drainage. 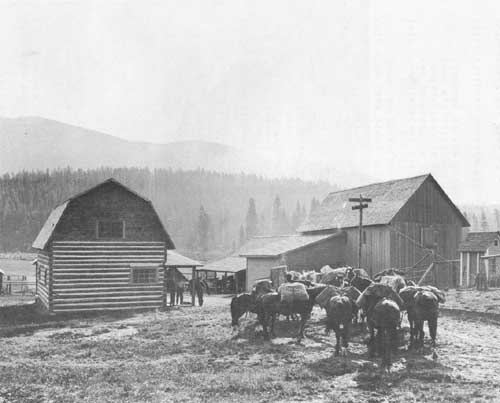 1941—The first use of Forest Service smokejumpers in the Forest. Thirteen jumped on a fire in the Dean Creek drainage.

1947—A total of 75 smokejumpers jumped on a fire on Kah Mountain. This is the largest number of airborne firefighters ever dropped on a single fire in the Flathead.

1953—Hunters harvested 920 elk. The 46-mile road along the west side of the Hungry Horse Reservoir was completed by the Bureau of Reclamation at a cost of $2 million dollars.

1958—A fire near Frozen Lake, on the Glacier View District, initiated the first use of aircraft to drop chemical fire retardant in the Flathead National Forest.

1963—Forest Service campgrounds were constructed at Lost Johnny Point and at Hungry Horse. Funds supplied by the Accelerated Public Works program made this possible. Annual payroll was $1,173,000.