Even though the mention of tragedies and deaths may be depressing for some readers, the history of any area would not give a true account of happenings if it did not take note of the accidents.

Information about the first Flathead fatality came from James Harbin, brother of Forest F. Harbin, who was killed in a Great Northern Railway accident near the Cut Bank bridge, Cut Bank, Montana, in 1906. Harbin was on official duty for the Forest Service, traveling from Summit to Cut Bank for supplies. He was riding in the last car of a freight train when it was rammed from the rear by another train. Forest Harbin and three other men were killed. Thomas Dillon, who built the Dillon Hotel in Kalispell, was one of the victims.

A young man was killed by a dynamite blast at Star Meadows in the late 1920's. I can't recall the victim's name; his parents lived at Kila. Jack Lillevig was the District Forest Ranger.

Lester Rude died of a heart attack while working on the Sullivan Creek forest fire in 1929.

A Civilian Conservation Corps (CCC) enrollee from Columbia Falls was killed in 1934 when struck by a falling snag on a forest fire above Nyack. A CCC enrollee was drowned in 1935 in the South Fork River at Elk Park.

A falling snag killed a pickup firefighter on a fire in the Swan about 1935.

In July 1937, Harold Hatton was struck by lightning and later died. (A detailed account of this is in the chapter on lightning.)

Another CCC enrollee drowned in 1939 in the North Fork.

No Flathead National Forest employees lost their lives in Forest accidents during the 12-year period of 1939 to 1951. In 1952, Oscar Norman, of Somers, was killed on the South Fork road when his car collided with a logging truck. The same year, Charles Labalmo, an Eskimo firefighter, died in his bed in a fire camp at Camp Misery on Noisy Creek. This camp is high, and it was quite cold in late September. Les Darling discovered the body. Labalmo died of heart failure.

Ranger Virgil (Stubby) Eastman was killed November 3, 1953, when struck by a falling tree, on a control burning project on Crane Mountain. Ranger Glen Maryott was struck by the branches of the same tree, but was not injured.

Ranger Oliver (Slim) Meyer died of a heart failure in 1954 while helping set up a temporary cruising camp in the North Fork. W. N. (Bill) Chilton and J. C. (Bob) Robertson were with him.

Eugene Tuininga was killed in the crash of a Forest patrol plane in Fatty Creek on the Condon District in 1955. Gene Cole, the pilot, and Fred Wagner, a passenger, were also killed in this crash. Tuininga was the first Forest Service employee killed in Region 1 in an airplane crash while on active duty.

Many incidents involving Forest users have not been taken into account in this chapter. In September 1958, a University of Montana student Eugene Prange went into the Mission Mountains Primitive Area. Prange has never been heard of since. In 1960, William Whitney went prospecting northeast of Echo Lake, in the Strawberry Lake Area. He failed to return; his body was never found.

Usually, when a major accident occurs, even though Forest Service personnel are not involved, the Forest Service is asked to assist in transporting the victim or for other emergency services. Until the helicopter came into local use about 1954, transporting the injured or sick required carrying them on a stretcher, if they were unable to ride a horse. This was hard work. The longest trip I can recall was in 1937. A crew from Spotted Bear packed a woman by the name of Mason, who had become very sick, from Bungalow Lookout to the road at Spotted Bear—a distance of about 35 miles—over a rough trail for the most part. The woman recovered with no ill effects.

In the late 1940's, a hunter from Missoula became very sick in his camp about 16 miles from Big Prairie. Members of the party asked for help carrying him to the Big Prairie airstrip. This man weighed nearly 300 pounds; it looked like it was going to be a real task. Theodore "Toad" Paullin was alternate Ranger at Big Prairie and quite an ingenious packer. Paullin contrived a travois behind one of his gentler mules, fashioned a bed on the poles, and brought the big fellow out in good time.

In 1955, a hunter got mauled by a grizzly bear in "Shirt-tail Park," on Gordon Creek above Big Prairie. The hunter was in serious condition, in need of medical attention, and in no condition to be packed on a stretcher. A call for help was made by phone to Big Prairie; they notified the Regional Office, realizing that fast action was required if this young man's life was to be saved. The Regional Office dispatched a crew of smokejumpers, with first-aid supplies and tools, to jump at this location. The smokejumpers, specially trained in this type of service, gave first aid, while other jumpers cleared an area for a helicopter to land with a physician. The injured hunter was flown to a Missoula hospital. Thanks to proper first aid and fast action by the smokejumpers, he recovered.

When the services of a physician or the use of helicopters or other hired equipment (that does not belong to the Government)—such as ambulances, planes, etc.—is required, the bill for payment is the responsibility of the victim or the person who makes the request for such services or equipment. There is no charge for the use of ordinary Government equipment or for the wages of Government employees while employed on emergency rescue missions.

As a footnote to tragedies, it is fitting to mention that 23 men lost their lives on various projects during the construction of Hungry Horse Dam. 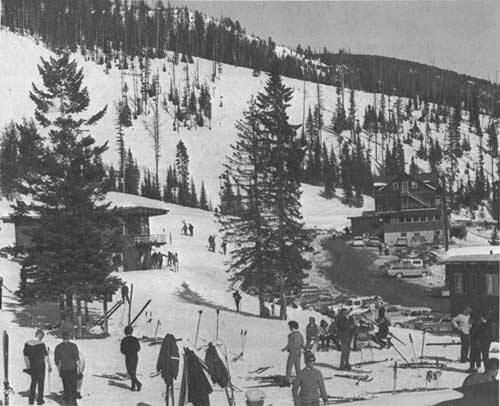