One of the Forest Ranger's many duties is growing, protecting, and harvesting timber in the National Forest. When the first Rangers were assigned to administer these areas in 1898, timber sales were small, and the timber was usually purchased for fuel, house logs, or for other homestead improvements. The first commercial timber harvests were for road ties and for small mills cutting lumber for the local market.

One of the first mills of any size—for cutting and shipping lumber—was built by Lebert and Burns in 1898 on the Stillwater River just north of Kalispell. It had a capacity of 20,000 board feet per day. By 1905, production had reached 70,000 feet per day before the mill was destroyed by fire. Most of their logs were driven down the Stillwater River. The last major log drive in Flathead County was in 1931.

In 1900, the John O'Brien Lumber Company constructed a mill at Somers to cut 40 million board feet a year from logs driven down the Stillwater and Flathead Rivers to Flathead Lake, where they were caught in booms and towed to the mill. Some logs were shipped by rail. This mill was later sold to the Great Northern Railway Company and was known as the Somers Lumber Company. This mill has been removed.

An interesting example of early-day sale negotiations is noted in the Flathead National Forest's files of 1907. It tells of an application by Edward Dickey of Kalispell to cut 40,000 ties from an area west of the track at Paola siding above Nyack. This was an ideal logging chance due to the gentle terrain, proximity to the railroad, and good timber. Supervisor Page S. Bunker was in favor of making the sale, but the Forest Service's Washington Office turned it down because Dickey was only taking the timber of the proper size to be hued into ties and leaving the larger trees stand. There was considerable correspondence in regard to this sale, but the Washington Office held firm. However, in 1917 (10 years later), the tie timber was taken out, and the larger timber remained until 1944 when it was sold. Eventually, it was cut by Rocky Mountain Lumber Company.

The largest timber sale ever made by the Flathead was made to the Somers Lumber Company in 1913. The sale was for timber near the head of Swan Lake; a volume of nearly 90 million board feet. This sale created radical changes in logging methods, camp accommodations, and equipment. It was logged by railroad logging equipment, barged across Flathead Lake from Somers and hauled overland to the foot of Swan Lake, then barged again to the sale area. Tracks were laid into the cutting areas; the logs were hauled to the lake, boomed, and towed to the mill at Somers. This was the first time logs had been brought out of the woods except by horses or oxen. Railroad logging was the prescribed method for the next 15 to 20 years. Logging trucks took over the job in the early 1930's. Most of the railroad logging was done on private holdings.

This Swan Lake timber was cut over a period of 3 to 4 years and was the largest volume of any one sale ever made in the Forest. It did not bring the largest amount of money to the United States Treasury. This honor goes to the Sullivan Creek sale on the Spotted Bear District; in 1955, nearly $300,000 was paid for 21 million board feet.

Timber cutting activities associated with the clearing of the Hungry Horse reservoir area should not be confused with timber sales in the Flathead Forest. Approximately 90 million board feet of timber was removed from withdrawal lands administered by the Bureau of Reclamation, Department of the Interior. The county did not receive 25 percent of the revenue from this timber harvest, as is the case with all Forest Service receipts.

Timber is harvested on Forest Service lands on a sustained-yield basis: the annual average cut will not exceed the annual average growth. In the Flathead National Forest, this has been established at 127 million board feet for saw-timber with an additional 8 million board feet for salvageable dead and other wood products. Cutting of private timber supplied local mills until about World War II. This doesn't mean the Flathead hasn't been making timber sales since 1900, but it does mean the Forest did not sell the full volume of sustained yield.

The annual cut started to increase on the Flathead following World War II. In July 1947, Gordon M. "Bud" Daugharty, who is now retired, came to the Flathead to head up timber sales preparations. This was the first time the Flathead ever reached the allowable cut, then set at 60 million board feet. Demands for timber increased steadily and after better inventories, better silviculture practices, and better utilization practices were employed, the annual allowable cut was set at 127 million board feet. The demand for timber for the past several years has increased, and no difficulty is experienced in selling any timber stand anywhere on the Forest at this time.

Fiscal year 1963 saw more timber cut than any other year in the Forest's history. Around 141 million board feet was cut. 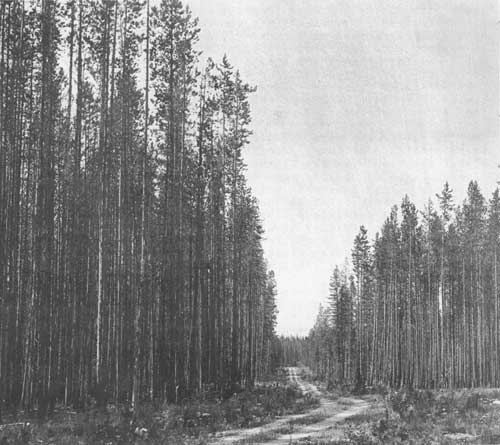 Lodgepole pine on the north Fork near Trail Creek.

As this was more than the Forest's allowable cut, it will be considered in the overall average throughout the years to come.

The annual cut is now more than the combined total Forest cut during the first 45 years after the Forest was created. The method of sales preparations has advanced over the years and is keeping pace with modern logging methods. During World War I and for a few years later, Rangers went into areas to be logged, usually during the winter months, on snowshoes. They estimated the stand-per-acre, age, and quality of the timber, compiled a drainage map, and selected locations for log chutes to bring the logs to the bottom of the canyons.

Some timber cruise maps included locations of flumes for log transportation, although I don't believe any Forest Service timber was flumed in the Flathead Forest. The ruins of old flumes can be found that were used to transport private timber. Sometimes splash dams were built in the smaller streams to hold back the water. These dams had floodgates that, when opened, caused sufficient flooding action to carry 16-foot logs downstream. Dickey Creek, just below Essex, had at least four splash dams to carry the logs to the mill near the railroad crossing on Dickey Creek. Today, this system would be frowned upon as being detrimental to fish culture.

Skidding was done with horses. Some logs were hauled to the mill on wagons or sleighs, but most of the logs were decked in the summer and hauled on sleighs in the winter. The Somers Lumber Company mill received many of its logs over the Great Northern Railroad, although there was an annual spring log drive down the Flathead and Stillwater Rivers. These logs were usually felled in the summer and fall and hauled to the riverbank on sleighs in the winter to await the spring runoff. The last river drive in the Flathead was in the spring of 1931. From this time on, logging trucks took over the job of delivering the logs to the mills.

Log hauling by trucks again changed the cruising methods somewhat. Foresters forgot about river landings, log chutes, and flumes and started locating logging roads. Log hauling by trucks and skidding by "cats" changed logging. Long distances from the mill were not such a burden. The time saved, from the time the tree was felled until the log was in the mill, was one of the greatest advantages. Today, many trees are felled in the morning and are in the millpond by nightfall. Many trees standing in the Forest at daybreak are made into lumber and stacked for drying that evening under the present-day method of "cat" skidding and truck transportation.

Sale preparation, including cruising, has also changed with the times. Aerial photos and plot cruising with prism has lessened the fieldwork required in establishing cutting units. Most of the National Forest timber is now sold in clearcut blocks. This has eliminated the necessity of marking each individual tree as was done in earlier times. It would be impossible to prepare and administer a timber sale of 140 million board feet a year with the present Forest personnel following methods employed even 20 years ago.

Modern methods and better silviculture practices are employed in the Forests today. Thinning, pruning, and other methods to improve timber stands are today a "must." Also, tree planting has been stepped up in areas of old burns and in clearcut areas where natural reproduction is lacking or where there are less desirable species. The Flathead National Forest planted 400,000 trees in 1963.